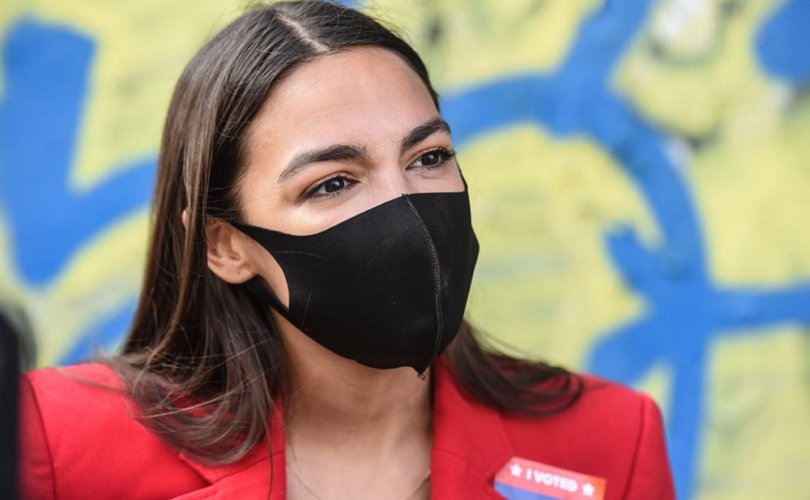 KANSAS CITY, Missouri, July 28, 2020 (LifeSiteNews) — The dissident National Catholic Reporter (NCR) on Monday ran an article in which it acclaimed pro-abortion and pro-homosexual Democratic congresswoman Alexandria Ocasio-Cortez as “the future of the Catholic Church.”

Heidi Schlumpf, NCR’s executive editor, said she was struck by Ocasio-Cortez’s speech on the floor of the House of Representatives in response to a Republican congressman calling her derogatory names, emphasizing “how often it referenced Catholic values.”

“Ocasio-Cortez repeatedly railed against the ‘dehumanizing’ of others and instead called for treating people with dignity and respect,” Schlumpf wrote. “These are themes often repeated by Pope Francis, who has specifically cautioned about gossip and urged the use of respectful language, saying “it is possible to kill someone with the tongue.’”

Schlumpf did not explain how Ocasio-Cortez’s words had anything to do specifically with the Catholic faith. Likewise, Schlumpf did not point out the irony of Ocasio-Cortez calling out others for dehumanizing fellow human beings, when she herself is a strong supporter of abortion.

In a separate tweet, Ocasio-Cortez added, “Ultimately, this is about women’s power. When women are in control of their sexuality, it threatens a core element underpinning right-wing ideology: patriarchy. It’s a brutal form of oppression to seize control of the 1 essential thing a person should command: their own body.”

From limiting birth control to banning comprehensive sex ed, US religious fundamentalists are working hard to outlaw sex that falls outside their theology.

The Catechism of the Catholic Church condemns abortion as a “moral evil.”

“This teaching has not changed and remains unchangeable,” the Church emphasizes. “Direct abortion, that is to say, abortion willed either as an end or a means, is gravely contrary to the moral law.”

The National Catholic Reporter has in the past argued against overturning the 1973 Supreme Court ruling in Roe v. Wade, in which the Court essentially imposed legal abortion across the country.

In her recent speech on the floor of the House of Representatives, Ocasio-Cortez called out Representative Ted Yoho for not offering a sincere apology to her after calling her derogatory names.

For the National Catholic Reporter, this was a reason to praise the congresswoman for giving “what sounded like a pretty good description of what goes on in the Sacrament of Reconciliation: ‘When a decent man messes up, as we all are bound to do, he tries his best and does apologize. Not to save face, not to win a vote, he apologizes genuinely to repair and acknowledge the harm done so that we can all move on.’”

“As a young Latina,” Schlumpf concluded, “Ocasio-Cortez represents the demographic future of the Catholic Church. But — if there is to be a future for the Catholic Church in the United States — it must also resemble Ocasio-Cortez in her passion for justice and human dignity, and in her courage and integrity, even in the face of vulgar attacks.”

If the future of the Catholic Church is represented by Ocasio-Cortez, that future would also entail full acceptance of homosexuality and transgender ideology among Catholics. While still running for office in 2018, the congresswoman spoke at a “Pride” event celebrating homosexuality and sexual perversion.

The Catholic Church teaches, however, that homosexual acts are contrary to God’s plan for human sexuality.

“Basing itself on Sacred Scripture, which presents homosexual acts as acts of grave depravity, tradition has always declared that ‘homosexual acts are intrinsically disordered,’” the Catechism of the Catholic Church points out. “They are contrary to the natural law. They close the sexual act to the gift of life. They do not proceed from a genuine affective and sexual complementarity. Under no circumstances can they be approved.”

Earlier this year, NCR was awarded with the first prize in one of its “best newspaper” categories by the Catholic Press Association for the 18th time in 20 years.

Already in 2013, Bishop Robert Finn of Kansas City-St. Joseph, where the newspaper’s offices are located, published a column reminding the paper and the faithful that it had been forbidden from using the name “Catholic” since 1968.