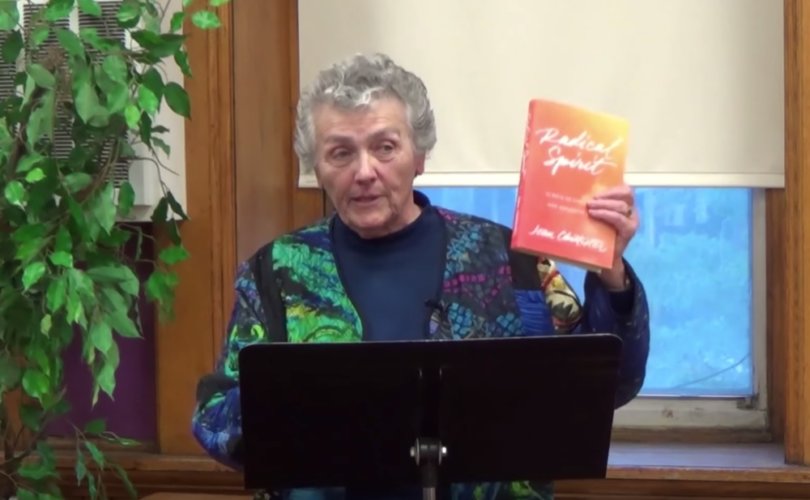 Joan Chittister holds up one of her booksJoanChittister / YouTube screenshot

June 28, 2019 (LifeSiteNews) ― A world-famous feminist theologian says that her invitation to speak at a Catholic education conference in Australia has been rescinded.

American Sister Joan Chittister, O.S.B., a prolific author and past president of the left-leaning Leadership Conference of Women Religious, gave an interview to The New York Times this Monday in which she expressed her displeasure that she will not be speaking at Australia’s National Catholic Education Commission’s annual conference in September 2020.

According the the NYT, Chittister received an email a few weeks ago telling her not to come to the conference because her invitation had not been “endorsed” by Archbishop Peter Comensoli, the ordinary of Melbourne.

The conference is being hosted by Catholic Education Melbourne, an archdiocesan organization.

Chittister, 83, believes that this is a “pathetic” attempt to censor her ideas and rob Australia’s Catholic teachers.

“It is pathetic,” she told the USA’s preeminent liberal newspaper. “These teachers for the next generation of thinkers are being denied the right to pursue ideas.”

The best-selling author, who has written over 50 books, has a dozen honorary degrees, even more press awards, and a literary archive bearing her name at an American university, believes this episcopal refusal to greenlight her as a speaker indicates a “dangerous” attitude.

“I see it as a lot bigger than one conference,” Chittister stated. “I see it as an attitude of mind that is dangerous to the church.”

However, the acting executive director of one of the groups organizing the conference has stated that no speaker has yet been invited to the 2020 conference. Jim Miles of Catholic Education Melbourne told LifesiteNews today via email that there had been a “miscommunication” regarding Chittister’s appearance.

“The 2020 National Catholic Education Conference will explore a number of ideas relevant to Catholic education in Australia, including Catholic identity, community engagement, school improvement and leadership and governance,” he wrote.

“As expected with any Conference like this, a number of staff have been tasked with identifying guest speakers and checking their availability,” he continued.

“It is ultimately the decision of the Conference organising committee, in consultation with the Archdiocese of Melbourne and the National Catholic Education Commission, to decide who the speakers will be in 2020. As of 28 June 2019, no one has been invited to speak at the 2020 event.”

Miles expressed regret that Chittister had been led to believe she had been invited.

“It is regrettable that Sr Joan Chittester may have been given the impression that she was invited to speak at the Conference. The Conference organising committee is working to ensure that this type of miscommunication does not occur again,” he wrote.

Miles wrote a similar statement to the NYT. Nevertheless Chittister insisted that she had been invited and provided a passage of the email that the NYT found “apologetic.”

“I am very saddened to say that while our organizing committee strongly supported the inclusion of Sr Joan as a speaker at the conference, the Archbishop of Melbourne has failed to endorse her inclusion,” it said.

A spokeswoman for Chittester told LifeSiteNews that the theologian “does not know anything about the relationship between the National Catholic Education Conference of Australia and the [Arch]bishop of Melbourne and for that reason does not want to comment on it.”

The New York Times took aim at Archbishop Comensoli, identifying him as a “conservative moral theologian” who had served Cardinal Pell as an auxiliary bishop. It wasted no time in reminding readers that Pell has been sent to prison after being convicted of the abuse of two altar servers. It did not mention that Pell has always protested his innocence, that he was convicted on the uncorroborated testimony of one man, and that many Australians believe his trial was a travesty.

Born in 1964, Comensoli became Australia’s youngest bishop when he was ordained in 2011. His extensive education includes a doctorate in moral philosophy from Edinburgh University. Comensoli wrote his thesis dignity of the intellectually impared, defending the right to life of unborn children with Down Syndrome and of people with dementia. He also earned a degree in moral philosophy at Scotland’s St. Andrew’s University and took a License in Sacred Theology at Rome’s Alphonsian Academy, which specializes in moral theology.

The publicity around Comensoli’s refusal to endorse Chittister as a speaker may help sales of her new book. The Time Is Now: A Call to Uncommon Courage is available for sale in English-speaking countries – including Australia. Although not boosted by the Archbishop of Melbourne, it has been praised by television host Oprah Winfrey.

Chittister is a high profile member of what has been called the dissident wing of the Church. In a 2010 interview with LifeSiteNews, the author agreed that she held positions that diverged from the Church’s magisterium. She asserted that magisterial teaching is “sexist” and that the Church lags behind in placing women in roles traditionally belonging to men.

“We have a Church that is based, like the rest of society, admittedly, on a patriarchal system – men are at the top, men are the last word, men are the first authority in everything,” she told LifeSite’s Patrick Craine.

“The problem is – it seems to me, as a follower of Jesus, when I look at Jesus and the way Jesus dealt with men and women in his society and I look at the way the Church excludes women from the heart of the system, both in the Vatican, and in chanceries, and in dioceses, and in seminaries everywhere, that I have to wonder how it is that secular institutions are leading the development of women in society, rather than churches,” she continued.

“It's a matter of saying, you know, everything written about us is written without us,” she said. “If a woman is a full moral agent, then she should be part of the decision making process on those questions.”

While underscoring that she does not believe in abortion as a birth control measure, Chittister said she believed that a refusal to discuss a possility that it is ever excusable was “anti-Catholic”.

“In every other dimension of moral, of the moral life, we recognize grades and degrees of innocence and guilt,” she continued.

“This is the one place where we say there are no grades or degrees of innocence. There's only total absolute evil and sin. I don't understand that.”

Fr. James Martin, S.J. of America magazine tweeted his dismay that Chittister will not be appearing at the 2020 Australian conference.

“Sister Joan Chittister has been speaking truth to power, with grace, for decades. A more mature church would listen to her, like it eventually listened to Catherine of Siena and Hildegard of Bingen. And cancelling her events will just increase her crowds,” the LGBT activist said over Twitter.

According to a spokesman for the Archdiocese of Melbourne, Archbishop Comensoli is “away at present so will not be able to provide comment on the NYT story.” According to the Archbishop’s Twitter feed, he has been in Rome for the Australian Bishops ad limina visit with Pope Francis.