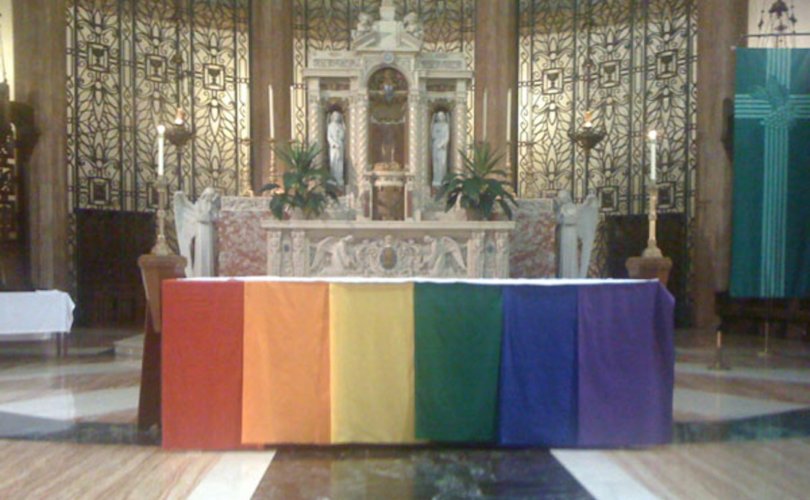 August 6, 2018 (Joseph Sciambra) – On June 24, 2018, at Our Lady of Grace Catholic Church in Hoboken, New Jersey, the Archdiocese of Newark, Fr. Alexander Santora celebrated the Parish's “first annual gay pride Mass.” At the beginning of Mass, Santora announced that he would offer a “special blessing” for those marching in the New York City gay “Pride” parade, which took place on the same day.

Alexander Santora, a priest in the Archdiocese of Newark, is a frequent contributor to NJ.com. A repeated topic he discusses in his column is the LGBT issue. In 2013 – as several cases on the State level concerning same-sex marriage worked their way through the Courts – Santora wrote:

Churches tend to makes change at a glacial pace. Yet, in two watershed decisions, the U.S. Supreme Court has validated the movement toward same-sex marriage that only began to register with American society a little over a decade ago.

He also quoted the response from the U.S. Conference of Catholic Bishops:

Today is a tragic day for marriage and our nation. The Supreme Court has dealt a profound injustice to the American people by striking down in part the federal Defense of Marriage Act. The Court got it wrong. The federal government ought to respect the truth that marriage is the union of one man and one woman, even where states fail to do so.

Then he added the following:

The Catholic bishops appealed to “the common good of all” and called for “a society that strives to uphold the truth of marriage.” The Supreme Court of the land, however, has expanded the notion of common good and an expansive view of marriage.

In 2015, Santora wrote an article in which he resoundingly praised the late Jesuit John J. McNeill – the founder of the dissident “gay” Catholic movement. Santora wrote of McNeill: “McNeill's courage and brilliance started the church on a trajectory that it is still trying to define.” According to Fr. John Harvey: “The dissenting theologian who has had the greatest influence on Catholic homosexual persons is probably John J. McNeill, S.J.” In his landmark 1976 work “The Church and the Homosexual,” McNeill wrote:

Since most gay people experience their homosexual orientation as a part of creation, if they accept this Church teaching, they must see God as sadistically creating them with an intrinsic orientation to evil. Most gays would prefer to see the Church teaching as wrong, rather than believe God is sadistic.

McNeill left the priesthood, and in 2008, he married his same-sex lover.

Before Santora's homily, a candle was lit and placed upon the rainbow flag in memory of those “gay” and “lesbian” parishioners who “[lived] a life of fear because the Church and society rejected them.”

Here are excerpts from Santora's homily:

If we look at the history of the Church there is an official teaching Church, which still doesn't quite understand how we have to move forward, but there are the people of God who understand that we are all created as we heard in today's first reading from Isiah, that we are all born, and we know that from birth, we were given our name. From birth we are dedicated to God[.] … We now have a Pope whose five words indicated that we have to look at how we welcome our gay and lesbian brothers and sisters – “Who am I to judge?” He said. And then we are blessed with Cardinal Tobin, our Archbishop, who little over a year ago, through the efforts of David Harvie, who is here today, welcomed our lesbian and gay brothers and sisters and transgendered into the Cathedral to celebrate for the first time, a pilgrimage Mass[.] … These are important historic moments for us.

But I think what Pope Francis invites us to do, is to look at that gap that's there between what it is as a Church, and how the people of God want us to move forward. Now, today many of you will march in the parade which is forty-nine years old. And that parade is significant. Because it has marked the changes in the LGBT community from new found freedom, to ministering to those individuals afflicted by HIV and AIDS, to equality in marriage and in unions. And through these decades, we understand how God calls us to always look at how we are all part of God's family. And so, as we move forward, its important for us to reconcile the differences that exist.

Pope Francis is going to Ireland in a few weeks for what's called the World Meeting of Families…for the first time, one of the documents that was issued by the Vatican uses the initials LBTQ. Some of us might say, well, what does that really mean? Because in society we are so far advanced. But I think as the Church inches forward, we have to celebrate any steps that include people rather than exclude them.

And what is also driving the Church's concern is that the Millennial generation rejects injustice and they see the Church's teaching towards LGBTQ as being antiquated. And they know that[.] … So the Church needs to acknowledge that since Stonewall in 1969, that we as an American community, and now a world community, see that God's people are as we sang in the song today – “wonderfully made.” That we are a reflection who God is, the diversity of all of us. And certainly, that will be seen later on in the parade.

I recently viewed the Gay Pride Parade during a prayer vigil alongside St. Patrick's Cathedral and saw an incredible display of self-defeating and self-deprecating behavior[.] … [W]hen one considers the ruin of human lives, the persistent spread of AIDS by promiscuous sexual activity, and the psychological conflict one observes in the gay scene, the haunting question comes, “Can I approve of behavior that so frequently leads to destruction?”

In New York City, gay men are 140 times more likely to contract HIV or syphilis than straight men. In comparison, according to the American Lung Association: the risk of developing lung cancer is about 23 times higher in male smokers compared to male non-smokers.

The Church has to move in a new direction. First, we need to understand that one's orientation is given. It's not a choice. What's given and what's possible are two different things. And so, oppressing one's orientation is not healthy or good. But somehow our theology has to catch up with where the world is.

Jesuit priest James Martin has repeatedly made the same claim concerning the origins of homosexuality. During a June 16, 2017 Jesuitical podcast, Martin said:

God made you this way. You are wonderfully made, just like Psalm 139 says. You were knit together in your mother's womb this way, you know, it's a mystery why you were made this way, but this is part of your identity.

In 2017, Santora defended Martin against criticism, often coming from within the Church, because of his unorthodox views. On his official Facebook page, Martin thanked Santora for his support. Concerning Church teaching regarding homosexuality, Santora wrote: “We need a new language that reflects the latest scientific research into orientation.” During a 2017 interview, Martin said:

[A]s I say in the book, saying that one of the deepest parts of a person – the part that gives and receives love – is disordered is needlessly hurtful. A few weeks ago, I met an Italian theologian who suggested the phrase “differently ordered” might convey that idea more pastorally.

As we move forward certain practices have to end. We hear sad stories of individuals who are teaching or working in Catholic institutions and once it's found out that either they've married civilly or they are in a union, they can be fired. That's unjust and it has to end.

Finally, what we also need to reconcile is that more than one hundred years after Sigmund Freud identified the personality of an individual, the psychology of an individual, we have to realize that our actions are not isolated. For so long our Church looked at what people did, rather than who people are. And once we can make these changes, I think we're moving in the direction that will make us more inclusive. But also, will help us to live what we hear in today's reading – for if God ordained us from birth, then we are all made in the image and likeness of God. And what our world is recognizing, our Church also needs to recognize – is that diversity makes us special and God ordained it, and we celebrate it.

At the end of Mass, Santora said:

If there is one person in New Jersey, who's making a difference in the Catholic community it is David Harvie. He has been working behind the scenes, and with individuals, so that churches who want to welcome LGBT get support and help. And I say when the history is written of how we have changed, David would be a pivotal figure.

David Harvie is an openly partnered homosexual, and Santora is well aware of this fact. In an article Santora wrote about the Newark “gay” pilgrimage, he stated:

I first met Harvie and Mark Nebus at St. Aloysius in Jersey City back in the late 1980s. They would often sit in the front benches of the church and during the sign of peace would kiss each other. For the four and one half years they worshipped there, not one staff member or parishioner ever said anything about their exchange of peace.

According to another article about the “Pilgrimage”:

“I was really amazed at the level of healing and consolation,” said Harvie, who lives in Edison with his husband Mark Nebus and is a parishioner of St. Francis Cathedral.  “And the fact that the cardinal spoke to the group – he rearranged his schedule to speak to us – and toward the end of the Mass, the bishop who is the rector of the parish, made it a point to speak as well.”

On July 9, 2017, Harvie attended James Martin's talk at the Church of the Sacred Heart in South Plainfield, New Jersey. Martin posted a picture of Harvie on his Facebook page. Martin wrote:

David Harvie, one of the organizers of the LGBT Pilgrimage to the Newark cathedral (right) with his husband Mark.

Before the conclusion of the Mass, Catholic and openly “gay” politician Michael DeFusco offered a short address.