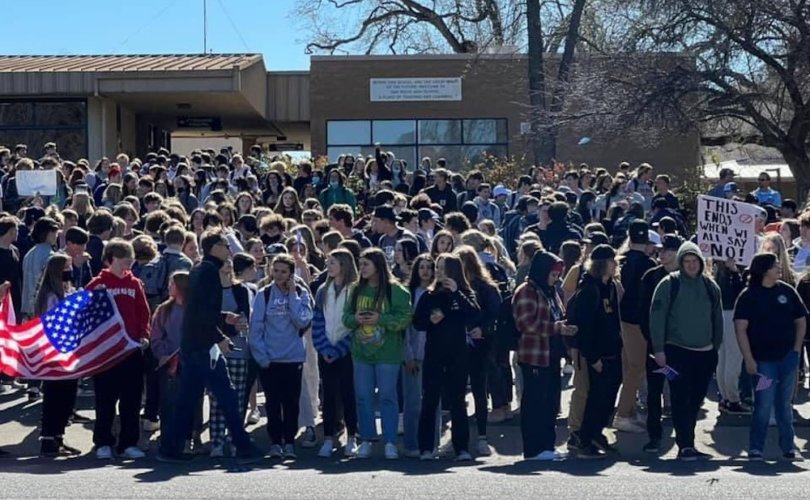 EL DORADO HILLS, California (LifeSiteNews) — Hundreds of students walked out of a California high school Tuesday in protest of the district’s delay in lifting mask mandates, even as Democrats nationwide have begun abandoning the policy.

The Washington Examiner reports that the walkout of Oak Ridge High School in El Dorado Hills “was a homegrown thing between the parents and then the kids working together to get everyone on board,” according to area parent Jennifer Yoder, after students were dismissed for showing up to school unmasked. “It just kept growing and growing. And then they eventually just got up and left those classrooms and ran outside and started their protest.”

More student protests breaking out around California.
We are taking our lives back, Gavin Newsom. pic.twitter.com/4eie2eOnCd

Later Tuesday, the El Dorado Hills Unified High School District sent parents a letter announcing it was “changing our masking enforcement protocols. The enforcement of masking will be done by educating students and asking them to mask but no further actions of exclusion from class will be taken … Moving forward students will not be physically removed from the classroom or receive a discipline consequence to prevent further exclusionary learning loss.”

“We are caught in the middle of a very difficult and progressively escalating situation where we acknowledge our obligation to comply with State and California Department of Public Health mandates and our actual ability to enforce those mandates,” the district claims.

Masking has been a source of frustration throughout the COVID-19 crisis, but tensions were intensified in California this month when state Health & Human Services Secretary Dr. Mark Ghaly announced a two-week delay in an expected end to the school mask mandate, punting it to February 28.