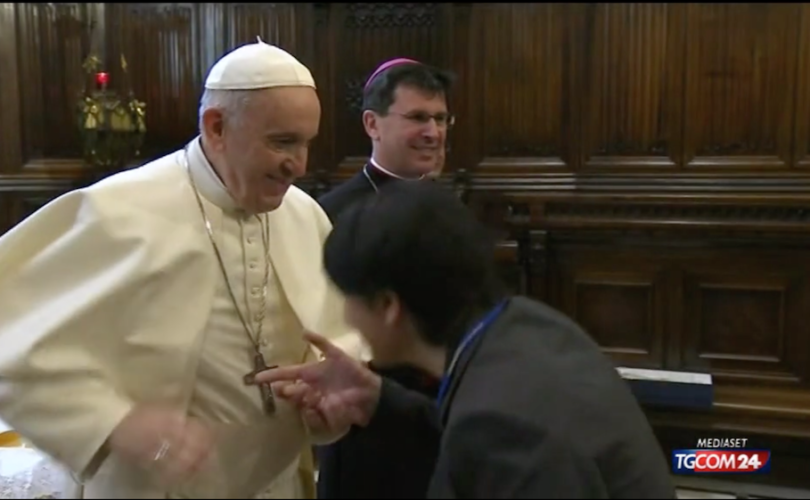 UPDATE (March 26, 2019 – 2:15 pm): The entire video of Pope Francis’s one-day visit to Loreto may be viewed below (scroll down to the bottom). At the 50:50-mark, Pope Francis can be seen greeting priests and men and women religious, whom he allows to kiss his papal ring. The Holy Father then begins to greet Catholic laity and begins pulling his hand away at 1:00:57.

ROME, March 25, 2019 (LifeSiteNews) — Pope Francis today made it clear that he doesn’t want the faithful to kiss his papal ring, as he repeatedly pulled his hand away from pilgrims who were lined up to greet him reverently during his one-day visit to the Holy House of Loreto.

A disturbing video from the Italian news site TGCOM 24 captured the Pope’s insistence that the laity not show him such reverence.

It’s not known why Pope Francis objects to this.

The meaning of the ring

A bishop’s ring is a sign of his “marriage” to the diocese over which he rules. Conferred during the rite of consecration, the episcopal ring was historically regarded as emblematic of the mystical betrothal of the bishop to his church.

The formula used in the rite of consecration of a bishop when he is invested with his ring is laden with such symbolism. According to the rite, the principal consecrator places the ring on the ring finger of the new bishop’s right hand, saying: “Take this ring, the seal of your fidelity. With faith and love protect the bride of God, his holy Church.” The formula dates back to the first millennium.

According to the Council of Nicaea, a bishop was not to be moved from his diocese due to the nuptial meaning of the episcopacy. Deserting the church to which he was consecrated and transferring himself to another diocese was regarded as tantamount to “adultery.”

St. John Fisher (1469-1535), the only cardinal to ever die for the faith, repeatedly refused to be translated to another diocese, even though he had been entrusted with the diocese of Rochester, one of the poorest in England. He said he “would not leave his poor old wife,” (the Rochester diocese) “for the richest widow (other diocese) in England.” Fisher in fact refused to abandon his diocese and was imprisoned and martyred for refusing to accept the king’s abandonment of his wife.

The gesture of kissing the episcopal ring (called the baciamano in Italian) is a way of reminding the bishop of his promises to his people and their loyalty to him. It is a reminder of the unbreakable nuptial bond between him and his people, and the affection and loyalty for each other. Clergy and laity who kiss a bishop’s ring therefore remind him of his undertakings when he was consecrated to the episcopate.

The Bishop of Rome’s ring — the “Ring of the Fisherman” — is a sign of his husband-father relation to the Church as a whole and is smashed upon the death of a pope. It is also the symbol of the Pope’s investiture of his office. To kiss the “Ring of the Fisherman” therefore alludes to the dignity and office and is an expression of loyalty to him as the Successor of St. Peter.

When Pope Francis received the fisherman’s ring at his installation on March 19, 2013, the Solemnity of St. Joseph, husband of the Virgin Mary and patron of the universal Church, the ring was borne in procession from the tomb of St. Peter where it had been laid.

As he received it, the following prayer was said:

Most Holy Father, may Christ, the Son of the living God, the shepherd and guardian of our souls, who built his Church upon rock, grant you the ring, the seal of Peter the Fisherman, who put his hope in him on the sea of Galilea, and to whom the Lord Jesus entrusted the keys of the Kingdom of heaven.

Today you succeed the Blessed Apostle Peter as the Bishop of this Church which presides over the unity of charity, as the Blessed Apostle has taught. May the Spirit of charity, poured into our hearts, grant you the gentleness and strength to preserve, through your ministry, all those who believe in Christ in unity and fellowship.

The episcopal ring symbolizes the unbreakable unity between the bishop and his spouse, the local Church. Pope Francis has shown himself to be uncomfortable with such traditional concepts in the past.

The Pope has also shown himself to be uncomfortable with other traditional gestures of reverence.

Shortly after his installation as Pope, he asked a young altar boy piously standing with hands joined if they were “bound together.” Attempting to pull the boy’s hands apart, Pope Francis said to him: “It seems like they’re stuck” (watch video here).

The reason for his aversion to the laity kissing his ring is unclear.

On Twitter, The World Over host Raymond Arroyo commented: “I think the Pope sees the ring kissing as an aggrandizement of his person and feels personally uncomfortable with the gesture.”

But in comments to LifeSite after seeing the video, a source close to the Vatican said: “He doesn’t get that it’s not about him. It’s about the office.”

LifeSite asked Vatican spokesman, Alessandro Gisotti, why the Pope did not want the faithful to kiss his ring during his visit to the Holy House of Loreto but has not yet received a response.

Here is the full video:

The Pope’s visit to the Holy House of Loreto — which is believed to be part of the home in Nazareth where the Blessed Virgin Mary lived when she received the message of the Archangel Gabriel and conceived the Son of God by the power of the Holy Spirit (cf. Lk 1:26-38), coincided with the March 25 liturgical feast of the Annunciation. Inside the Holy House of Loreto a Latin inscription reads: Hic verbum caro factum est – The Word was made flesh here.