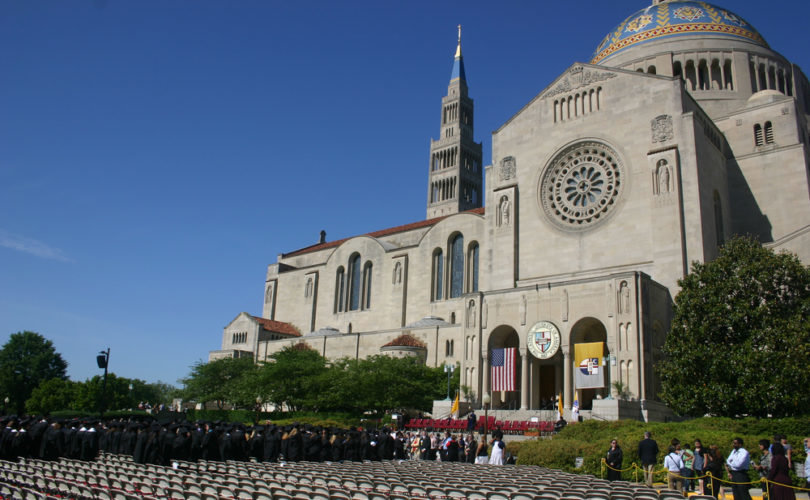 WASHINGTON, D.C., April 8, 2019 (LifeSiteNews) — By the barest possible majority, the Catholic University of America’s Student Government Association resolved to demand that the university shut down access to 200 of the most notorious pornography websites on its Wi-Fi networks.

On April 1, the SGA called on university administrators to effect the ban on the campus Wi-Fi used by faculty and students. Sponsored by student senator Gerard McNair-Lewis, the “Resolution for a Pornography Free Campus Network” called on CUA to “take an outward stance on the use of pornography by prohibiting access to the top 200 pornography sites through the campus network.” The SGA promoted a petition and resolution, signed by the student body president.

Resolution 108 states that the ban would allow the university to “remove itself as a means in accessing such material.” It was passed by the SGA by a vote of 13 to 12 and signed by SGA president Jimmy Harrington.

Harrington declared in a statement subsequent to signing the resolution that he does not believe that CUA students have any inherent right to access pornography on the campus internet.

“I am signing the Resolution not from purely religious or Catholic grounds, but because The Catholic University of America can and should exercise its rights to prohibit the use of pornography on the campus network,” said Harrington.

During Senate debate on the resolution, some opponents of the ban voiced concerns that it would amount to censorship. According to The Tower, CUA’s student newspaper, sophomore Matt Bechtel was alone in publicly opposing Resolution 108.

“I don’t think it’s in the character of this university to start censoring information,” Bechtel said, adding: “For example we don’t generally impose our religion on the students that go here. We’re a relatively tolerant university.”

Some students, however, expressed surprise that pornography had not already been banned on campus, citing the example of public high schools that already have such bans in place.

According to the Catholic News Agency (CNA), resolution co-sponsor Alexandra Kilgore said, “I was honestly shocked to learn that such a ban wasn't already in place. Even my public high school blocked inappropriate content on its wi-fi, so I knew The Catholic University of America could do better.”

Describing pornography as a “grave offense,” the Catechism of the Catholic Church says it  “offends against chastity because it perverts the conjugal act, the intimate giving of spouses to each other.” Moreover, the Catechism says pornography inflicts “grave injury to the dignity of its participants.” The Catholic Church teaches that “[c]ivil authorities should prevent the production and distribution of pornographic materials.”

The SGA’s resolution is non-binding, leaving it unclear how the President John Harvey and CUA’s administration will respond. CUA spokeswoman Karna Loyoza offered hope by praising the resolution’s “convincing argument.” “It is difficult to ignore the firm stance against pornography made by our student body,” Loyoza said, but “[n]o decision has been made on the ban” as of April 5, as reported by CNA.