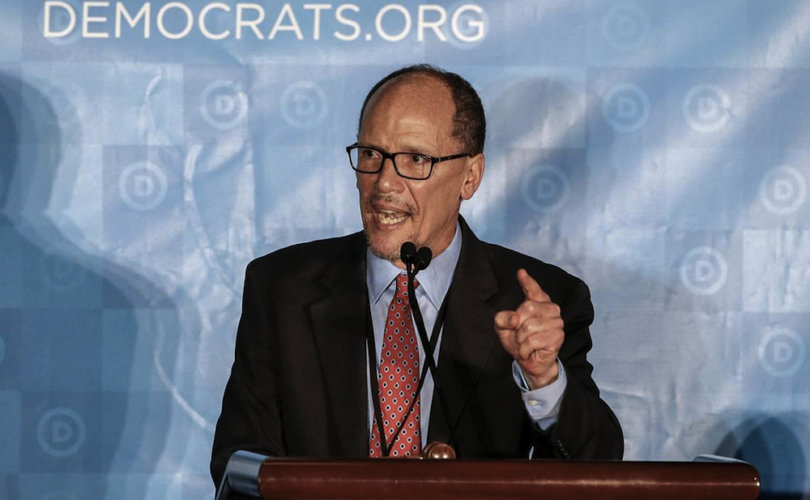 WASHINGTON, D.C., December 10, 2018 (LifeSiteNews) – The head of the Democratic National Committee assailed “the pulpit on Sunday” as a source of partisan indoctrination akin to cable news channels or lobbying group newsletters during a speech to a left-wing organization last week.

DNC Chair Tom Perez was addressing a “Court In Crisis: What’s Next For Progressives After Kavanaugh” summit in the nation’s capital Wednesday, hosted by the “progressive” lobbying group Demand Justice. The clip was released by the Republican National Committee and quickly went viral.

“We all have to make sure that we are fluent in what’s happening across our ecosystem so that we can come to each other’s defense. Because we need to build a bigger orchestra,” Perez told the crowd. “They’ve had a big orchestra for some time and they’ve got the megaphones to amplify it.”

Discussing his party’s difficulty penetrating certain parts of the country with its message, Perez highlighted something he said he was told by a fellow traveler in northwestern Wisconsin: “You know what, for most of the people I know, their principal sources of information are Fox News, their NRA newsletter, and the pulpit on Sunday.”

He went on to complain about “that person on the pulpit” allegedly turning churchgoers into single-issue voters with messages such as “Ignore everything else that this person has done and is doing, we have to focus on one issue of Roe vs. Wade,” the 1973 Supreme Court ruling that forced states to allow abortion-on-demand.

“And people buy it. Because that’s their only source,” Perez lamented.

The Christian Post noted that in a 2016 Pew Research Center report only 14 percent of Americans who attend religious services at least monthly reported hearing about political parties or candidates, and only 5 percent reported being told how to vote by clergy. Further, two percent of such advice was pro-GOP, two percent was pro-Democrat, and the remaining percentage point endorsed third-party or independent candidates.

The 1954 Johnson Amendment states that churches and other religious entities must refrain from advocating “on behalf of (or in opposition to) any candidate for public office” if they want to keep their tax-exempt status.

While important, abortion isn’t the only issue causing tension between Democrats and religious Americans. President Donald Trump has worked to reverse a number of Obama-era policies forcing religious taxpayers to subsidize contraception against their will, and incoming House Speaker Nancy Pelosi raised further concerns last month when she teased that “diversity” would be a priority for next year’s Democrat House majority.

Perez has a history of hostility to pro-lifers, as well. Last year, he caused a stir by suggesting pro-life Democrats within his party were not welcome.

“Every Democrat, like every American, should support a woman’s right to make her own choices about her body and her health. That is not negotiable and should not change city by city or state by state,” he declared. “At a time when women’s rights are under assault from the White House, the Republican Congress, and in states across the country, we must speak up for this principle as loudly as ever and with one voice.”

“This man is from some other universe. When I go to church on Sundays, I rarely hear a priest mention abortion, except in passing,” Catholic League president Bill Donohue responded at CNS News to the DNC chief’s latest. “More important, we Christians are not stupid people who take our political cues from any one source. We actually read and think for ourselves.”

“That we regard the fate of unborn children to be a paramount issue is true,” Donohue continued. “We only wonder why others don't agree. What is more important than the right to live?”