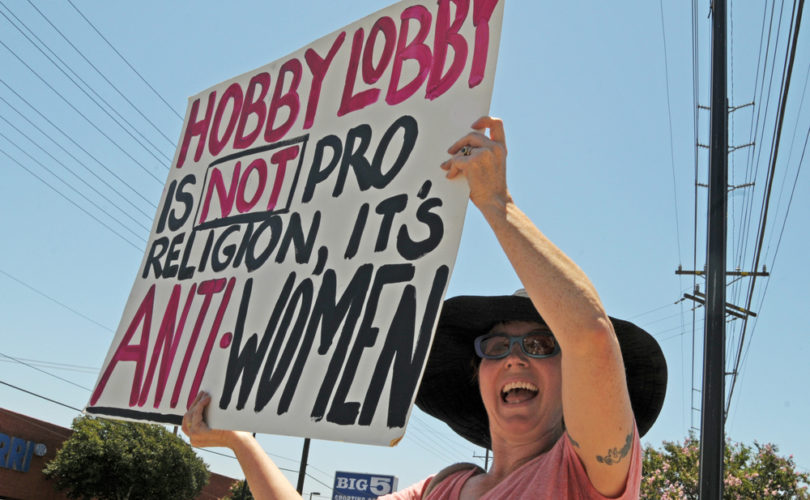 A protester rallies against Hobby Lobby, protesting against the Supreme Court decisionDan Holm/Shutterstock

The Supreme Court's Hobby Lobby decision was nearly two months ago, but the issue as hot as ever, as was demonstrated yesterday when Democratic National Committee chairwoman Debbie Wasserman Schulz, D-FL, urged constituents to boycott a Hobby Lobby store in her district.

In a press conference one lot away from the Hobby Lobby location in Davie, which opened in April, Wasserman-Schultz said that she wanted “people to know that this Hobby Lobby is here and they should vote with their purses and their pocketbooks, and women should not shop here.”

“If you didn’t know this Hobby Lobby was here before, know it now and don’t shop here. They don’t deserve women’s business because they are the ones that all across the country have made it harder for women to get access to birth control,” she said.

She also criticized the Supreme Court's late June decision in favor of Hobby Lobby, which had sued the federal government over the Obama administration's HHS Mandate.

The Green family, which owns Hobby Lobby, say it violates their conscience to pay for coverage for the four abortifacients and potential abortifacients that the mandate required them to cover.

“The Supreme Court’s decision in the Hobby Lobby case was not only disappointing, it was dangerous,” said the Democrat. “No boss should have the right to dictate and employee’s health decisions because [they] don’t belong in the bedrooms, doctor’s offices or pharmacies of their employees.

“A woman and her doctor know what’s best for their body. Not an insurance company. Not a politician. And certainly not a manager at a Hobby Lobby.”

The Supreme Court's decision allowed closely held corporations to not fund coverage of contraception or abortion drugs and devices.

Wasserman-Schultz's office did not respond to multiple requests for comment.

Through a spokesperson, the Green family declined to comment about the Congresswoman's statements.

What the mainstream media got wrong on the Hobby Lobby case