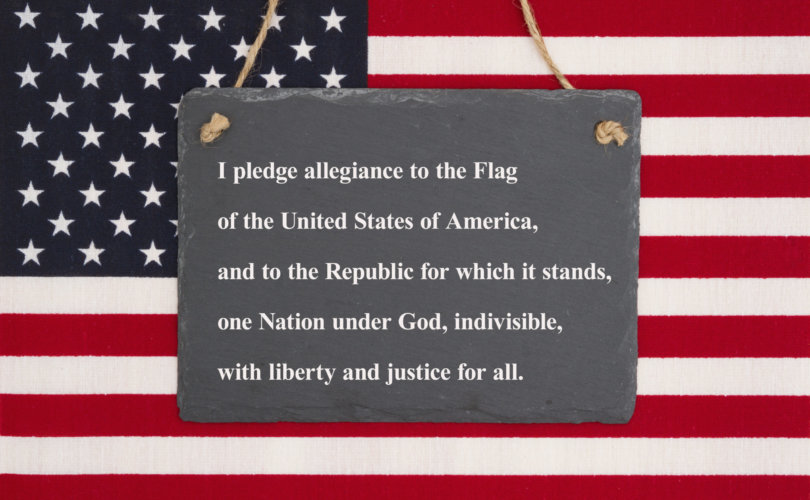 August 20, 2020 (LifeSiteNews) – During the Democratic National Convention this week, at least two meetings omitted the words “under God” from the Pledge of Allegiance. Earlier this month, President Donald Trump was attacked for characterizing Democratic presidential candidate Joe Biden as “against God.”

The pledge, according to the United States Flag Code, reads, “I pledge allegiance to the Flag of the United States of America, and to the Republic for which it stands, one Nation under God, indivisible, with liberty and justice for all.”

The Democrats’ Muslim Caucus began with the God-less pledge recited by one of the delegates. According to Chris Brody, chief political analyst at the Christian Broadcasting Network, both Senator Bernie Sanders and Rep. Rashida Tlaib participated in the meeting.

NEW! Democrats leave out, “Under God” from the Pledge of Allegiance at the #DemocraticNationalConvention Muslim Caucus meeting this week. Watch delegate AJ Durrani skip it. Featured speakers at the event were @BernieSanders @RashidaTlaib & @TomPerez @realDonaldTrump pic.twitter.com/Ra4SX2cqNy

The Democrats’ LGBTQ Caucus also began with a God-less pledge. In this case, the pause was deliberate and pronounced, so viewers and participants would be aware that some words were omitted.

The person reciting the pledge held up several flags, including an American flag and a rainbow flag showing support of homosexuality and gender ideology. Mere seconds into the pledge, the rainbow flag appears to drop and fall.

NEW VIDEO: At the #DemocraticNationalConvention , LGBT Caucus purposely leaves out the words, “under God” from the Pledge of Allegiance. Watch. This now makes twice that two key constituencies of the Democratic Party have done this. See my earlier tweet about DNC Muslim Caucus pic.twitter.com/2GIDcCMq1F

While the words “under God” were most likely intentionally omitted during the caucus meetings to express disagreement with the fact that the United States, at least historically, is a Christian nation, the pledge itself has changed several times over in its less than 130 years of existence.

More convincingly than a butchered pledge of allegiance, Joe Biden’s Agenda for Women shows that the Democrats are “against God,” as President Trump put it, especially by its almost unconditional support for killing unborn babies.

Roe v. Wade is the 1973 Supreme Court ruling essentially legalizing abortion across the country under the guise of a woman’s right to privacy. Since then, many states have passed or tried to pass legislation to limit the widespread killing of unborn babies. One piece of legislation is so-called heartbeat bills, which prohibit abortions as soon as the unborn baby’s heartbeat can be detected after roughly six weeks of pregnancy.

Biden said he wanted to repeal the Hyde Amendment by reissuing “guidance specifying that states cannot refuse Medicaid funding for Planned Parenthood and other providers and reverse the Trump administration’s rule preventing these organizations from obtaining Title X funds.” The Hyde Amendment prevents taxpayer funding of most abortions.

Planned Parenthood commits more than 345,000 abortions annually, according to its most recent annual report. Additionally, the organization handed out more than 593,000 emergency contraception kits, commonly known as the morning-after pill, which can also cause very early abortions in some cases.

Biden supported the Hyde Amendment for many years before reversing his position early during his campaign for president in 2019.

Biden had caused some controversy in June 2019 by saying he still supported the annual budget language that forbids taxpayer dollars from funding abortions except for cases of rape or incest, or to save a mother’s life.

Pro-abortion groups like Planned Parenthood pounced on his remarks, leading him to announce just a day later that he was changing his position. “If I believe healthcare is a right, as I do, I can no longer support an amendment that makes that right dependent on someone's ZIP code,” Biden said at the time.

The Democratic presidential candidate, in his Agenda for Women, also vowed to rescind the Mexico City Policy (now called Protecting Life in Global Health Assistance) requiring foreign non-governmental organizations (NGOs) not to “perform or actively promote abortion as a method of family planning” as a condition for receiving federal money.

In Biden’s Agenda for Women, he also declared his intent to restore Obamacare’s contraception mandate “that existed before the Hobby Lobby ruling: providing an exemption for houses of worship and an accommodation for nonprofit organizations with religious missions. The accommodation will allow women at these organizations to access contraceptive coverage, not through their employer-provided plan, but instead through their insurance company or a third-party administrator.”