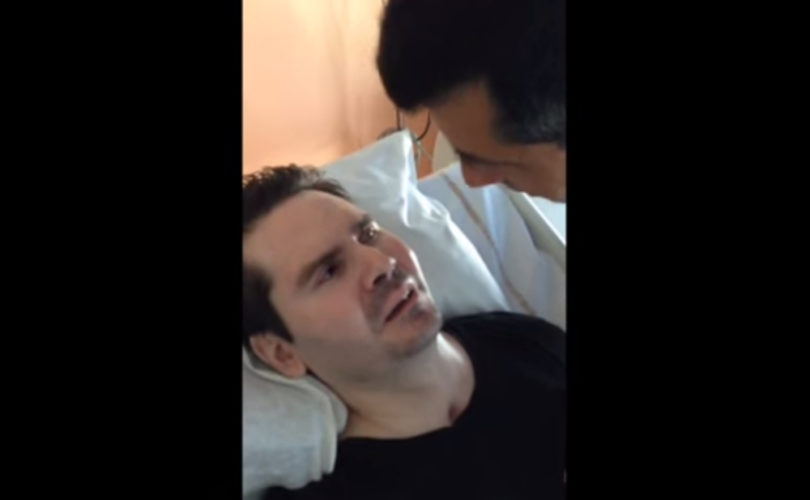 France, April 13, 2018 (LifeSiteNews) – The French “Terri Schiavo” will have his feeding tube pulled within a week if the decision made by a French hospital doctor is put into effect despite opposition from the patient’s parents and two of his siblings.

This is the fourth such decision in five years in the dramatic case of Vincent Lambert, a brain-damaged paraplegic in a minimally conscious state.

Up till now, several court victories, as well as a decision on the part of the University Hospital of Reims North, have allowed him to stay alive. With this latest attack, hope is dwindling. But Pierre and Viviane’s team of lawyers have made it clear that they will use every available means to challenge the decision of the new doctor in charge, Vincent Sanchez.

Vincent Lambert, 41, has been trapped in the same hospital room in Reims, in the north of France, for over six years now. He has been at the center of a bitter fight in which his wife Rachel and other members of his family have worked to obtain an end to all treatments, including administration of food and fluids through a gastric tube, in order to let him “die naturally”, as they say. But Lambert’s condition is not terminal: apart from his severe disability, he is not physically unwell even though his condition is slowly deteriorating. For the last years, he has never been moved from his bed to a chair nor has he received physiotherapy, so that is hardly surprising.

From the start, the “Vincent Lambert case” as it is named by the French media received a good deal of public attention. On the one hand, doctors supported by his wife and also a half nephew, François Lambert, who makes no mystery of favoring euthanasia, have been insisting that Vincent would not have wanted to live in the state he is presently in, although no definite proof of that has been forthcoming. On the other hand, his Catholic parents, as well as one of his sisters and a half-brother, have consistently affirmed his right not to be deliberately killed, even if this takes the form of “allowing” him to die of thirst and starvation. Mainstream liberal media have been nailing the parents’ religious views, accusing them of “fundamentalism.”

At the same time, the affair has been used politically in order to promote more liberal end-of-life laws.

This latest decision to pull Lambert’s food and fluids was triggered, strangely enough, by a request made by the half-nephew, François Lambert, the son of Vincent’s eldest half-sister. At his instigation, Dr Sanchez set “collegial proceedings” in motion that under the latest end-of-life law – the Leonetti-Claeys law of 2016 – provides the setting for active end-of-life decisions. Under this law, the doctor in charge must decide when treatment given to a patient should be deemed “obstinate”, having consulted with his or her medical team, family members and other doctors – but these consultations are not binding and in the end, the doctor decides alone. Should he determine that the care being given to a patient falls under the heading of “therapeutic obstinacy”, then he is by law required to put an end to that care.

That would be acceptable if extraordinary means were involved, so as not to make a patient suffer uselessly from invasive treatments. But under the explicit provisions of the law, ordinary nursing care such as “artificial” hydration and feeding through a feeding tube have been defined as medical treatments that can and should be withdrawn even when they fulfill their own objectives without unnecessary pain or discomfort, as is the case with Lambert.

Sanchez arrived at the conclusion that keeping Lambert alive by continuing to give him nourishment constitutes “therapeutic obstinacy” for two reasons.

The first is that it has not been possible to establish a consistent means of communicating with the patient – even though a video was smuggled out of the hospital in 2015 by friends showing Vincent looking intently at his brother and following him with his eyes. At that point, the whole of France saw that Vincent is alive, for the document was widely shown by the media. It was from that point that Lambert was kept locked in his hospital room and that a shortlist was made of people who could visit him. His own father and mother had strictly limited visiting hours and up till now are forced to leave their identity cards with the nursing staff in order to go in to see him.

Sanchez was cynical enough to say that Lambert would not have liked that situation and gives it as a further reason to “let him die”.

Brushing aside the witness of Lambert’s parents and closest friends that he reacts and obviously has some consciousness and even a relationship to the world, albeit minimal, Sanchez consistently refused to watch a video demonstrating that he has recovered the ability to swallow food. Lambert had lost this ability after the head injuries he suffered in a car accident some 10 years ago.

Jérôme Triomphe, one of the Lambert parent’s lawyers, told LifeSite that 24 experts who had seen that video unanimously agreed that Vincent should receive rehabilitation in a specialized center and that he would probably be able to eat through his mouth. More and more carers working with persistent vegetative state patients are coming to the conclusion that this state simply does not exist, Triomphe said, because given proper care and rehabilitation they all find a means, however tenuous, of making themselves understood.

In an ironic development, in an application of the latest end-of-life law, Sanchez ordered that deep sedation combined with strong painkillers be administered to Lambert when his feeding tube is withdrawn, which means the decision to “let” an unconscious man die takes into account the fact that he could suffer during the process…

Moving Lambert to a specialized unit, several of which are prepared to enroll him, is the major request being made by Lambert’s legal team – a request made many months ago and that is at present awaiting a decision from France’s Court of cassation, in the face of Rachel Lambert’s refusal as the patient’s legal guardian.

The second major reason quoted by Sanchez is the discomfort which he says Lambert plainly shows, particularly when he is receiving certain forms of personal care, due to a history of abuse which he underwent as a young adolescent at a religious boarding school. Several legal decisions in this lengthy affair took pains to say that it is difficult to interpret manifestations of discomfort and that they can certainly not be indicative of a will to die.

While one of the doctors who has worked with Vincent for many years, Ana Oportus, has recently made clear during official consultations that she is now personally opposed to submitting him to an end-of-life process, Sanchez is going forward while at the same time making clear that Lambert’s will is anything but clear-cut.

Speaking with LifeSite, Jérôme Triomphe underscored the fact that the official 17-page decision Dr Sanchez handed over to Lambert’s family last Monday speaks of Vincent’s “possible” will to die. Ultimately, though, the doctor’s “doubts” and “uncertainties” matter not at all as the decision to pull his patient’s feeding tube is ultimately a personal one.

Sanchez even went so far as to say that any appeal made against that decision would not suspend its execution. While this is nonsense from a legal point of view, Viviane and Pierre Lambert were particularly hurt by that statement.

Sanchez repeatedly said that his decision is founded on the fact that Vincent has a “suffering body.” This is the stuff that mandatory euthanasia is made off: France is now clearly in a state where the medical authorities can decide that a human being has lived enough.