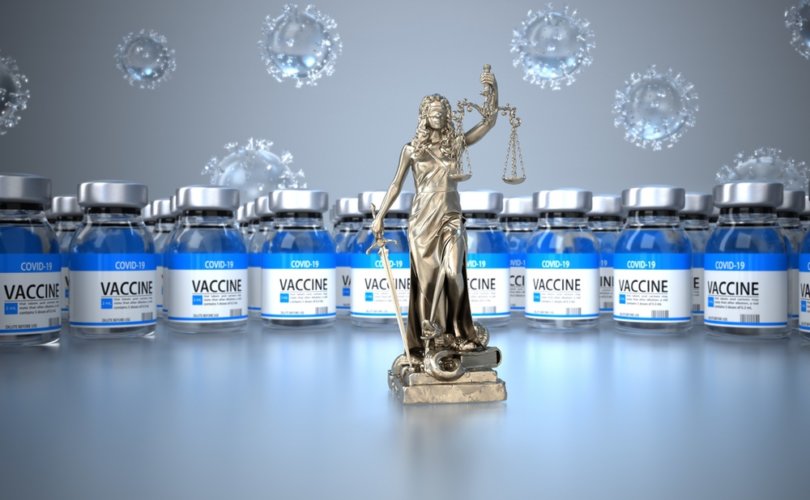 PHILLIPSBURG, New Jersey (LifeSiteNews) — A New Jersey medical doctor who was fired last year for refusing to take the experimental COVID-19 jab says his health network made “false and misleading statements” to encourage employees to get the shots, and “failed to consider compelling evidence that the mainstream COVID narrative was seriously flawed.”

The doctor now plans to sue his former employer for wrongful termination, and also intends to file a lawsuit against a telemedicine credentialing company he believes refused to credential him because of his stance on the increasingly mandated injections.

In August 2021, SLUHN CEO Richard A. Anderson sent out a memo to all hospital employees advising them that they would need to become fully vaccinated by September 25 or lose their jobs.

— Article continues below Petition —
PETITION: No to mandatory vaccination for the coronavirus
Show Petition Text
1082127 have signed the petition.
Let's get to 1100000!
Thank you for signing this petition!
Add your signature:
Show Petition Text

In the email, which Dr. Braun forwarded to LifeSite, Anderson repeated the mainstream view that COVID-19 had become “a pandemic of the unvaccinated,” a claim challenged by studies and public data showing spiking hospitalizations and deaths among the “fully vaccinated,” along with the steadily nosediving real-world efficacy of the experimental COVID-19 drugs.

Months earlier, per another document obtained by LifeSite, Anderson had also asserted that “the vaccine prevents asymptomatic spread” of COVID, a claim walked back by public health experts including Centers for Disease Control and Prevention (CDC) Director Rochelle Walensky and National Institute of Allergy and Infectious Diseases (NIAID) head Dr. Anthony Fauci.

Dr. Braun, who has extensively researched the COVID-19 drugs as well as studies contradicting the mainstream narrative surrounding them, told LifeSiteNews he decided to challenge his employer’s jab mandate.

According to Braun, in an effort to encourage vaccine uptake, SLUHN had made “false and misleading statements” in its “two missives to the employees.”

The email exchange obtained by LifeSite shows Braun responded to the August directive with a series of questions.

Among the doctor’s queries were whether St. Luke’s leadership was aware that public health experts have acknowledged the jabs don’t stop transmission, whether they knew that data from Israel strongly challenged the efficacy of the shots, and whether the health system was aware of the harmful effects of the spike proteins produced by the mRNA drugs.

In addition, Braun asked if the health network was “willing to take financial responsibility for any serious adverse reactions that may befall us” by getting the jab.

The doctor said he “never got a written, comprehensive answer to any of my questions.”

St. Luke’s did not immediately respond to LifeSite’s request for comment.

Anticipating his future termination from his role, Braun nevertheless bolstered his case against the jab mandate by creating and sending a heavily-sourced document providing summaries of studies showing the inefficacy and danger of the injections along with the ethical problems of coercing people to take drugs that are not licensed by the Food and Drug Administration (FDA), and whose clinical trials are not set to wrap up until 2023 at the earliest.

Braun also argued that being fired for refusing an “experimental therapy” violated his rights under the Nuremberg Code, a series of medical ethics crafted at the end of World War II to guard against future atrocities like those committed by the Nazis, which included conducting medical experiments on prisoners in concentration camps.

Meanwhile, Braun is not alone in arguing that the Pfizer jabs currently available in the U.S. are not the same as the drugs which were granted “full approval” by the Food and Drug Administration (FDA) last year.

Earlier this month, The Epoch Times reported that “few, if any” of the FDA-approved COVID-19 Pfizer drugs labeled “Comirnaty” are available in the U.S. Instead, only an unbranded version of the Pfizer drug, which is still under an Emergency Use Authorization (EUA), is being distributed.

The FDA has stated the Comirnaty and unbranded drugs “are legally distinct with certain differences,” which they say “do not impact safety or effectiveness.”

However the distinction has caused concern.

Matthew Staver, founder and chairman of the Liberty Counsel, a legal group, argued in a statement obtained by The Epoch Times that since “[t]here is currently no fully FDA-approved licensed COVID shot available to the population” and “[e]verything that is available remain[s] under the EUA law,” people should “have the option to accept or refuse the shots.”

Rep. Thomas Massie (R-KY) has also made the point that Comirnaty is not available in the U.S.

According to Braun, the CDC, FDA, and other agencies which have forwarded studies to justify universal vaccination “are essentially engaging in propaganda and pseudo statistical hocus pocus.”

“None of the studies that they present show things that real epidemiologists would be interested in, for example, an absolute risk reduction number for an important endpoint like death or ICU admissions whenever they present a study,” Braun argued.

Regardless of his efforts to prove the inefficacy of the COVID drugs, in September 2021 Braun was terminated from his position. He now plans to levy a legal challenge against St. Luke’s for wrongful termination.

According to the health network, Braun was among 155 employees who lost their jobs for refusing to get the experimental shots.

Dr. Braun told LifeSite he also intends to file an additional lawsuit against a credentialing company which refused to certify him for a telemedicine license, since he suspects his application was rejected due to his refusal to get the jab.

A lawsuit would enable him to subpoena the records to determine the reasons his application was rejected.

For now, Dr. Braun, also a licensed acupuncturist, works in private practice. At 67 years old, he said the only reason he’s interested in pursuing a wrongful termination case is “to bring out the greater issue, which is a crime against humanity.”

While noting that many face intense pressure to get the shots, Braun urged people in similar situations to “stand up for the greater good,” noting that it’s “totally wrong” and “outrageous” to coerce people to violate their convictions and take an experimental drug just to keep their jobs.

“You see an obvious malevolent handiwork here,” said Braun, adding that he’s “confident that God’s law is going to prevail.”