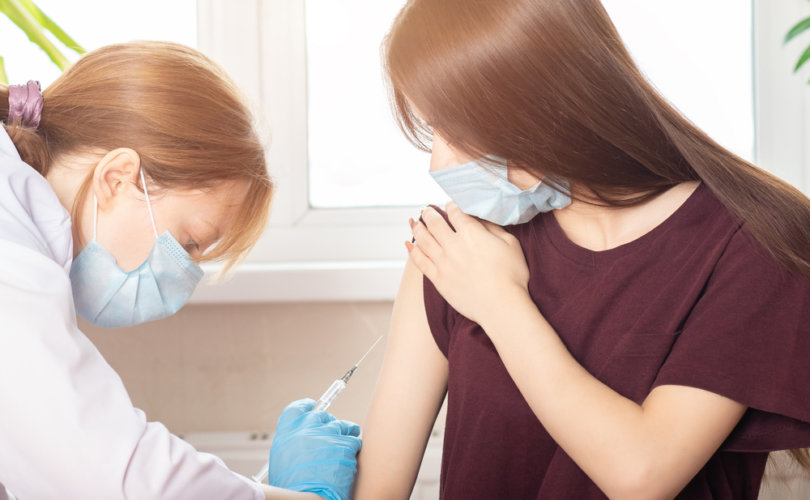 (LifeSiteNews) — A Canadian doctor ousted for giving ivermectin to COVID-19 patients is warning that mRNA COVID jabs can permanently alter DNA and cause cells to churn out “toxic” spike proteins “forever,” especially in children.

Dr. Daniel Nagase explained the mechanisms behind the dangers of the mRNA jabs during a discussion of Pfizer’s released jab trial data that showed at least a 30% adverse reaction rate to the shots “with no recovery,” including deaths, which accounted for 3% of jabbed trial participants, although they “were directly attributable to Pfizer’s COVID-19 injections.

Nagase told Will Dove on his Iron Will Show that even before learning of this “unheard of” 30% rate of side effects, health officials should have known of the dangers of inserting mRNA into cells, which he said have been established “since the 90s.”

Perhaps most alarming is that the inserted mRNA from the shots has the ability to convert to DNA via reverse transcriptase, and Nagase said this is especially a danger for children.

“Once something has been transcribed to DNA, it can get integrated into the nucleus of the cell … so it can permanently change that cell’s DNA,” Nagase continued.

“So this greater preponderance of reverse transcriptase within children would be the explanation for why we’re seeing a higher percentage of adverse reactions in them, is that correct?” Dove asked.

Nagase further explained that because DNA can be altered via the reverse transcriptase, and the DNA will then program cells to create the spike protein, it doesn’t matter what dosage of the jab is given to children. Lower doses, he said, will only slow down the time it takes for the cells to be re-programmed.

“Once something is in the DNA, the only thing that will get rid of it is the death of that cell,” Nagase said.

In response to Dove’s question whether there is “any way that we could term this as anything other than a bioweapon,” Nagase replied, “It’s designed to cause permanent changes to the cell. To trick the cell into producing a non-human protein that has no benefit to that cell’s health. The spike protein itself is toxic. … [and] causes mutation by inhibiting DNA repair.”

“So if you are injecting something into people that causes their body to produce a mutagen, a toxin that prevents DNA repair, that is by definition causing harm to people. And injecting people with something that causes harm to them through a biologic mechanism: Well, that’s pretty much the definition of a bioweapon, right?”

Noting that almost 300 young athletes “have dropped from the playing field,” about “70 percent” of whom died, Dove asked, “What’s going to happen now that they’re injecting this into five-year-olds?”

“I can describe it in no other way than child sacrifice. Dr. Hodgkinson over in Edmonton, he was the first to come out in public and say, this is actually child sacrifice. I have to agree with him 100 percent,” Nagase said.

“This never should have been considered for injection into children because the results from the adults has been so damning, so disastrous,” Nagase continued.

‘Cutting them up from the inside’

To explain the frequent incidents of athletes “dropping” from the field mentioned by Dove, Nagase proposed that athletes may suffer more severe side effects than non-athletes. He said this is because the spike protein produced by the jab acts as an “abrasive” in the body, and the athletes’ hearts are pumping harder as they exert themselves, exacerbating the effect of the abrasive spike protein, which “can cause mechanical damage the inside of blood vessels.”

Nagase highlighted the fact that the Pfizer data showed an alarmingly high rate of serious adverse effects in pregnant women: 75 out of 274 women, or 27%.

“Any pregnant woman who received this injection after April 30th, 2021 should be suing their obstetrician for malpractice,” Nagase said. When Dove noted that this data excluded any effects on children, Nagase went on to note himself, “This is just the damage that they discovered in the first three months between December the 1st and February the 28th. A pregnancy is nine full months. We don’t know how many of the other cases that were non-serious in the first two months might turn into serious events, miscarriages, stillbirths, birth defects, deformities.”

Nagase further pointed out that the protein produced by the mRNA jab interferes with the body’s normal cancer-fighting mechanism of “detect[ing] abnormal proteins in the circulation.”

If “your body is continuously producing an abnormal protein, it’s not going to be able to detect the abnormal proteins coming from a cancerous cell with the same accuracy and sensitivity that it would have if there weren’t abnormal spike proteins circulating all the time,” Nagase said.

He said there are two other ways the spike protein can contribute to cancer: one is that it diverts ribosomes needed to create proteins to protect cells from toxins or stress, and uses those to create the spike proteins instead; the other is that they “lead to mutations by preventing the normal processes a cell uses to repair any damage to the DNA,” Nagase said, noting this was demonstrated in a study published October 13.

Nagase concluded that the dangers of the mRNA jabs are “certainly premeditated.” In previous mRNA experiments on animals with the SARS-CoV-1 virus, he said, “They made an mRNA vaccine. And guess what? All the animals that got the vaccine when they were exposed to SARS COVID one, they died! And the animals that didn’t get the vaccine, they survived.”

Commenting on Nagase’s interview with Dove, Dr. Mark Trozzi concurred. “Pfizer knew what they were doing,” he said. “They skipped the animal trials and went straight to the entire human race. Politicians, bureaucrats, medical licensing bodies, all institutions and all individuals supporting this are guilty of genocide crimes.