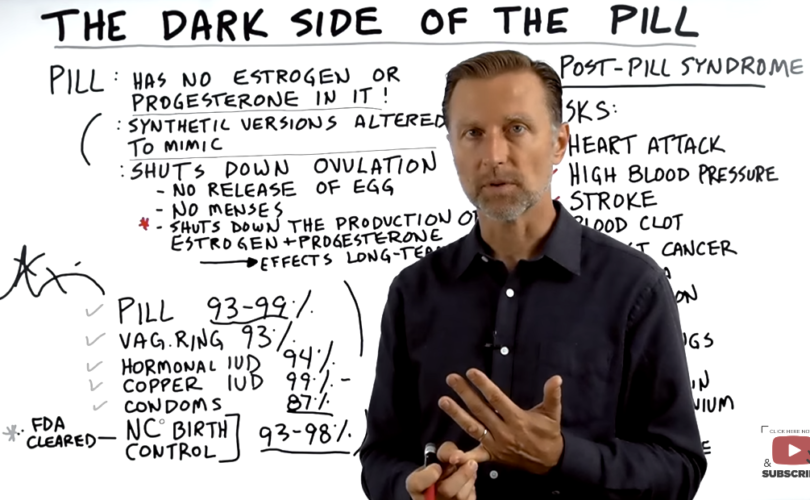 (LifeSiteNews) – A popular dietary expert on YouTube released a new video that explains the dangers of artificial birth control and advocates instead for a natural form of family planning.

Dr. Eric Berg, a chiropractor and dietary expert with over 8 million subscribers on YouTube, posted a YouTube video with a discussion on the “dark side of the birth control pill” while exposing the negative effects the pill has on women and offering a natural alternative.

“There is actually no real estrogen or progesterone in a birth control pill,” Berg said. “What you do have is a synthetic version altered in a way to mimic estrogen and progesterone.”

Berg went on to say that what women do not realize is that replacing naturally produced estrogen and progesterone with an artificial version can lead to various complications.

Among numerous health risks, the birth control pill can “increase your risk of heart attacks, blood pressure, strokes, blood clots, breast cancer, dementia, depression, acne, mood swings, [and] it can even trigger auto-immune diseases.” He went on to describe how birth control also depletes women of many necessary minerals such as zinc, selenium, and magnesium, and vitamins such as B12.

“What a lot of women don’t realize is when you take this pill, you are shutting down the production of estrogen and progesterone,” he said.

Berg went on to explain that this is a dangerous thing to do because women, unlike men who produce testosterone every day, produce their necessary hormones in “two major spikes.” That is, instead of producing the necessary hormones daily, women produce the hormones at two points during their cycle, one where they see an increase in estrogen, and one where they see an increase in progesterone.

Berg says the long-term effects of removing natural hormones from a woman’s body are quite dangerous, negatively affecting menopause, bone function, and even longevity.

Pro-life and pro-family activists have long warned of the dangers of artificial contraception – as has the Catholic Church, which is the only remaining religion to condemn contraception openly and completely. In addition to the many health dangers of the birth control pill, some of which were outlined by Berg, the broader culture of casual sex that contraception (including non-hormonal barrier methods), has enabled and encouraged has led to widespread misery from promiscuity, increased abortion rates (with abortion regarded as a back-up method of birth control), and skyrocketing rates of sexually transmitted diseases. It has also degraded male-female relationships by giving men access to easy sex with little to no commitment or consequences.

And although artificial birth control is frequently peddled to young women as a way to treat acne or menstrual or hormonal disorders, pro-life and pro-family advocates point out that this approach masks symptoms rather than addresses their underlying cause.

Birth control pills and IUDs can also cause very early abortions. If they fail to prevent fertilization – which is when a whole, distinct, living human being begins to exist – these methods of contraception typically weaken the lining of the uterus so that it is hostile to a newly created human, preventing implantation.

‘An offense against the law of God and of nature’

Even non-Catholic Christians largely opposed contraception until the Lambeth Conference of 1930 infamously approved it in some instances. In Casti Connubii, Pope Pius XII refuted the idea that contraception was ever acceptable, warning that those who “deliberately frustrate” the “natural power and purpose” of the marital act “sin against nature and commit a deed which is shameful and intrinsically vicious.”

“Any use whatsoever of matrimony exercised in such a way that the act is deliberately frustrated in its natural power to generate life is an offense against the law of God and of nature,” Pius XII wrote, “and those who indulge in such are branded with the guilt of a grave sin.”

Instead of artificial birth control, Berg recommended Natural Cycles, an app that allows women to track their cycles and accompanying symptoms in order to avoid or achieve pregnancy. Natural Cycles is “the first FDA cleared birth control app,” its website says, and it tells users trying to avoid pregnancy to use non-hormonal contraception (condoms) “or abstain from sex” on fertile days. (There are a number of methods of menstrual/hormonal cycle tracking that couples can use to achieve or avoid pregnancy without degrading the marital act; Pius XII outlined some of the legitimate reasons for intentionally abstaining from intercourse during the fertile window in his famous Address to Midwives on the Nature of Their Profession.)

Bishop Joseph Strickland of Tyler, Texas has previously reminded Catholics of their duty to respect the Church’s teachings on contraception. On July 26, the anniversary of the publication of Humanae Vitae, Strickland tweeted a reminder to all Catholics to heed the truth in regard to this issue.

“Humanae Vitae, issued in July 54 years ago, taught the Truth that contraception is immoral and does harm to marriage & the family,” he said. “We have lived for more than 1/2 a century with humanity rejecting this Truth & this has done great harm to the human family. Let us heed The Truth!”

Humane Vitae, issued in July 54 years ago, taught the Truth that contraception is immoral and does harm to marriage & the family. We have lived for more than 1/2 a century with humanity rejecting this Truth & this has done great harm to the human family. Let us heed The Truth!