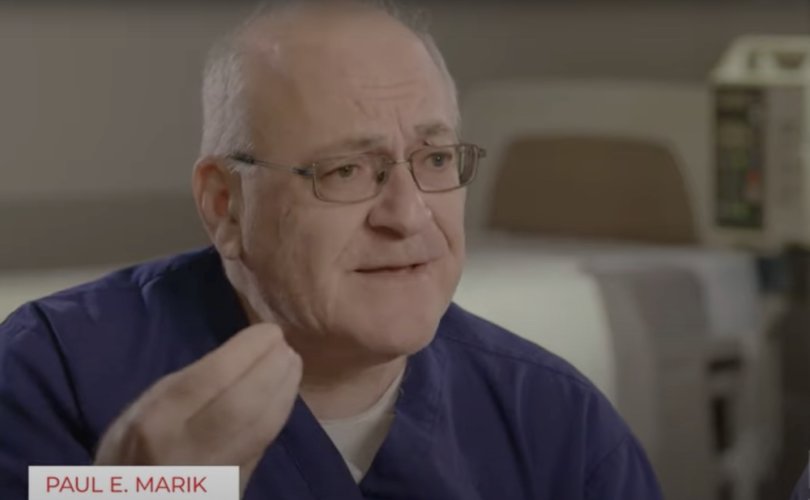 (LifeSiteNews) — A medical doctor was stripped of his ability to treat patients after he pioneered an in-hospital COVID-19 treatment protocol using generic FDA-approved drugs.

The chief of pulmonary and critical care medicine at Eastern Virginia Medical School and practiced at Sentara Norfolk General Hospital, Marik was the first witness to speak at the conference.

Dr. Paul Marik’s address begins at 21:58 on the below video

Marik said his group developed the protocol, called MATH+, in March 2020 at a time when “there was a complete void” of available treatment options.

“The NIH, the CDC, WHO said there’s no treatment. It’s supportive care. Which was completely absurd,” he said. “So patients were admitted to New York hospital, they were put on ventilators. They got no specific treatment. And then that mortality was 90 percent.”

The physician said the protocol he developed last year consisted of regimen of FDA-approved drugs including methylprednisolone, ascorbic acid, and anticoagulant heparin, and has expanded over time “based on the best evolving science” to include anti-androgen therapy, vitamin C, ivermectin, and fluvoxamine.

Though he was never permitted to use ivermectin in his hospital, Marik said he was allowed to use the other medications and enjoyed success with them.

“We did really well compared to national averages,” he said, adding that a Houston-based colleague who was following the protocol told him he saw a hospital mortality rate of less than 10% in COVID patients treated with the multi-drug sequence.

“And then, inexplicably, October the 5th, my hospital system, Sentara Health Care System, sent out a system-wide memorandum basically targeting me personally and banning the use of ivermectin, fluvoxamine, anti-androgen therapy, and discouraging the use of vitamin C,” Marik said.

Instead, Marik said he was pushed to use Remdesivir, a drug which he said “increases your risk of renal failure and liver failure.”

Marik said he “was being forced to use that toxic medication” rather than “the medications I knew that were safe, effective, and cheap,” adding that the week after the memorandum took effect he dealt with seven COVID patients suffering from “COVID pneumonia” and was not permitted to use the drugs he would otherwise have prescribed.

“All seven patients died,” he said. “It was an absolute outrage, including a 32 year old woman and a 40 year old man, and I had to stand by and watch idly as these patients died. It broke my heart and I was broken, so I really had no option. It was either to quit or [file] an injunction against the hospital.”

Marik decided not to quit his position, instead filing suit against the hospital system November 9, arguing that the drugs he was using to treat patients were “safe FDA approved drugs.”

On the same day he filed suit against Sentara, the Journal of Intensive Care Medicine (JICM) retracted an article that Marik had co-authored on his MATH+ Protocol, citing “concerns about the accuracy of COVID-19 hospital mortality data reported in the article pertaining to Sentara.”

The move to retract the article came after Sentara reached out to the JICM having “conducted a careful review of our data for patients with COVID-19 from March 22, 2020 to July 20, 2020” and arriving at the conclusion that the article co-authored by Marik calculated an incorrect mortality rate which it used to back up its claim of risk reduction resulting from the MATH+ protocol.

However, attorney Fred Taylor, a partner at Virginia law firm Bush & Taylor and Marik’s legal representation in the lawsuit, told MedPage Today that the lawsuit is “not about a journal article.”

“This case is about whether a hospital administration can legally prohibit critically ill COVID patients from receiving information—and treatment, if they so decide it is medically appropriate for them—about safe, FDA-approved, and potentially life-saving medicines as determined by their attending physician,” Taylor said.

While Sentara Health System has stated it did not ask JICM to retract Marik’s article, the hospital system moved to strip Marik of his hospital privileges, a decision the physician described as “retaliation.”

“They basically violated the basic patient physician relationship,” he said. “It’s the doctor who decides on the best treatment for his patient. We’re not telling doctors what to do. It’s the doctor we want. Let doctors be doctors, let doctors at the bedside decide on the best treatment for their patients, whatever that may be. And unfortunately, the hospital and the federal government is now interfering with physicians’ ability to treat their patients.”

“We need to let doctors be doctors. They’re the ones caring for patients and taking on the responsibility. They’re the ones who can be sued.” ~Dr. Paul Marik
Read the article on his lawsuit against Sentara Healthcare:#FLCCCNews #LetDoctorsBeDoctors pic.twitter.com/gynbzqVC0Z

Marik said what happened to him is “not an uncommon thing,” but is instead “happening across the country.”

“Doctors are being targeted,” he said. “They’re losing their license[s] because they want to prescribe off-label medications that are safe. And prior to COVID, the FDA promoted the use of FDA-approved off-label drugs. They said it was perfectly fine for physicians to do this based on their clinical judgment.”

Marik described his punishment and that of doctors as “a moral outrage,” adding that he is speaking out “not just for me and my patients” but to start a “dialogue” about treating COVID-19 using methods other than those recommended by “powerful” interests.

“People in this country need to know how we’re being held hostage by these very powerful forces,” the physician said.

The conference was held on the 80th anniversary of the Japanese attack on Pearl Harbor that propelled the United States into World War II.

“Today on this very hallowed remembrance of Pearl Harbor, we’re going to discuss this additional war,” said Dr. Vliet in her introduction to the gathering.

“On the COVID front, there’s a war for your medical freedom and your right to choose what treatments you wish to put into your body.”