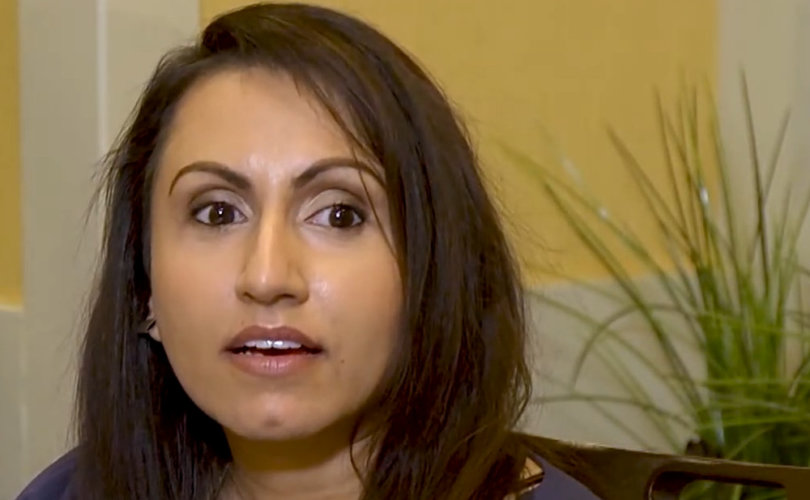 March 9, 2021 (LifeSiteNews) – An Ontario doctor speaking out on social media against COVID lockdowns and vaccines has been warned by her local physicians’ college that her viewpoints are “irresponsible behaviour” spreading “misleading information” about the virus.

The College of Physicians and Surgeons of Ontario (CPSO) lists three areas of concern regarding Dr. Kulvinder Gill on its website, and cautioned her in-person on February 3, 2021.

The CPSO’s Inquiries, Complaints and Reports Committee stated that the complaints against Gill revolve around a number of her tweets voicing her opinions on COVID lockdowns, masks, and vaccines.

The CPSO complained that Gill “appears to be willfully spreading false and misleading information regarding COVID-19 that goes directly against the advice and recommendations of local, provincial and federal medical/science and public health authorities.”

“In her comments on Twitter (tweets), the Respondent claims that: COVID-19 is not a serious health issue; Hydroxychloroquine (HCQ) is a safe and necessary drug that should be used for COVID-19; There is a conspiracy to suppress information from the public; A vaccine is unnecessary; Mitigation strategies such as masks and the and the lockdown are not necessary; There is some vague ‘truth’ to her position,” reads the complaint.

In social media posts, Gill has stated many times over the last few months her views on vaccines and COVID-19 lockdowns. She has been an advocate of using HCQ as a treatment for COVID, saying the “smears against Hydroxychloroquine” as an effective treatment for COVID-19 “need to stop.”

Gill’s legal team is the Constitutional Rights Centre headed by Toronto lawyer Rocco Galati. In a statement regarding Gill, the organization blasted the CSPO’s decision, stating it “knowingly and intentionally” ignored evidence brought forward by Gill.

“The mainstream media, feeding off the College of Physicians and Surgeons of Ontario’s (CPSO) website and the ICRC’s decision with respect to Dr. Kulvinder Gill, continues to spread its addiction to its own misinformation.”

“In its decision to impose a ‘caution’ the CPSO Committee selectively, and in bad faith, throughout its process, selectively takes comments by Dr. Gill out of context,” the statement continues. “It knowingly and intentionally ignored the renowned avalanche of world scientific and medical opinion, cited and submitted by Dr. Gill in support of her statements stemming from, supported by, and agreed upon by peer-reviewed scientific and medical publications, eminent professors and world experts up to, and including, Nobel Prize winners.”

Galati is representing Gill in a $6.8 million libel suit against those who she says have opposed her along with the past president of the Ontario Medical Association (OMA). She is claiming her reputation as a doctor has been maliciously maligned though a “coordinated” attack.

The CPSO said Gill’s comments regarding COVID vaccines were “inappropriate” and a “potential risk to public health.”

“Health Canada has tested vaccines in accordance with national standards and approved several vaccines for use in this country,” wrote the committee.

The CPSO also stated, “While it is possible for a return to ‘normal life’ without vaccinating the public, this is a high-risk strategy and one that could potentially take years to achieve.”

The CPSO said Gill’s views on vaccines and lockdowns, as stated on her Twitter page, were not evidence-based, did not align with their views, and were not accurate. “For the respondent to state otherwise is misinformed and misleading and furthermore an irresponsible statement to make on social media during a pandemic,” wrote the committee.

On August 4, 2020, Gill wrote on Twitter, “If you have not yet figured out that we don’t need a vaccine, you are not paying attention. #FactsNotFear.”

She has also stated that contact tracing and quarantines are “ineffective, naive & counter-productive against COVID-19.”

In May of 2020, Gill said a now-dead Canadian government deal with China to produce a coronavirus vaccine is a “dangerous endeavour” and that Canada should instead fund vaccine trials with allied nations.

For her part, Gill appealed the CPSO rulings to its Health Professions Appeal and Review Board, claiming that her tweets were taken out of context and published only on her personal account.

The CPSO argued that Gill’s tweets “by their very nature have minimal context.” Accordingly, the CPSO “did not accept the Respondent’s position that her tweets come from a personal Twitter account that has no affiliation to her practice.”

Many have come out to support Gill, notably Dr. Neda Amani, who took to Twitter to thank Gill.

“You Dr. Kulvinder Kaur are to be celebrated as a living example of the power & potential of every human being. You have upheld your Oath as a physician with courage because of your love for humanity & integrity. Your light will shine for all time. Love, admiration & gratitude,” wrote Amani.

Gill took to Twitter this past Sunday to state her thanks to those who have supported her.

“My heartfelt thank you for your outpouring of support, kind messages and encouragement. ‘My humanity is bound up in yours, for we can only be human together,” tweeted Gill.

Despite the CPSO’s warning, Gill has remained active on Twitter.

On March 2, she tweeted about freedom and one’s own sovereignty. “You, and you alone, hold the power to your own freedom & sovereignty. No one else has ever had that power unless you willingly give it to them. The power has always been within each and every one of us. It is only by asserting your rights and freedoms, that they remain protected.”

COVID-19 vaccines approved for use in Canada are the abortion-tained AstraZeneca product, as well as the Pfizer, Moderna, and Johnson & Johnson vaccines, which are all connected to some extent to abortion.

In December of 2020, Health Canada warned Canadians they should avoid the Pfizer jab if they are allergic to any of its listed ingredients.

Recently, Canada’s National Advisory Committee on Immunization (NACI) said that the AstraZeneca vaccine should not be given to those over 65 due to “lack of information” about how the vaccine performs in the older age group.

VCC is suing the Canadian government under Prime Minister Justin Trudeau to hold it “accountable” for its “overreach and the draconian and unjustifiable measures taken in response to COVID-19.”

Ted Kuntz, president of VCC, recently told LifeSiteNews that any immunity a vaccine would give would be “temporary” compared to natural immunity.

“Unless individuals are regularly tested for antibody levels, there is no way to determine whether a vaccinated individual is actually immune. Further, up to 10 percent of the population does not respond to vaccination and fails to generate significant antibody levels to produce immunity. This is especially true with the elderly and those with compromised immune systems,” Kuntz told LifeSiteNews.

Kuntz also blasted the idea of so-called “vaccine passports” after Trudeau appeared to be open to the idea.