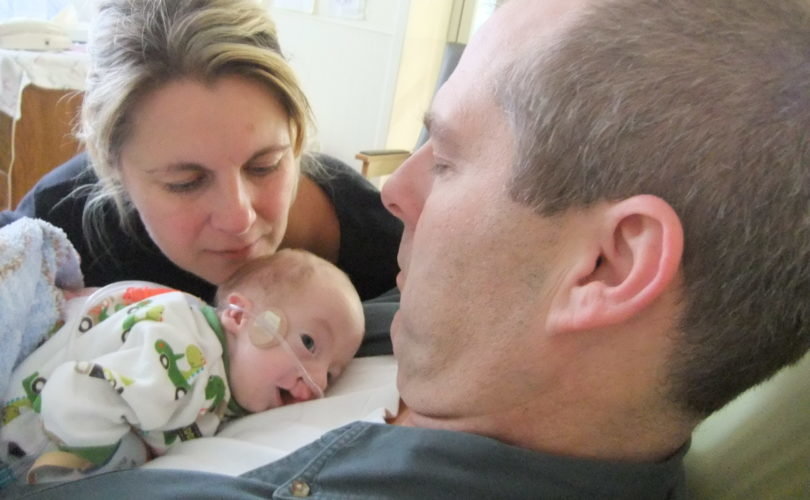 Imagine being in a hospital watching your recently born child gasp for air as his or her oxygen levels plummet. Imagine watching in horror as medical professionals stand by doing absolutely nothing, indicating to you through body language and inaction that your son or daughter is not worth saving.

This is exactly what befell Sheryl and Scott Crosier, of St. Louis, Missouri, in December 2010 when they lost their three-month-old son Simon who had the chromosomal abnormality Trisomy 18 that left him with serious physical problems. Weeks after his death, the parents discovered that the hospital had a “futility policy” in effect that allowed doctors to actually place a “Do Not Resuscitate” order on Simon’s medical chart without his parents permission or consultation.

It turns out that the medical staff were following orders as they stood by watching Simon die.

“[With a futility policy] doctors can basically do whatever to expedite — I hate to use the words — the demise of your loved one,” Sheryl told LifeSiteNews in a telephone interview. “Any doctor can do this to your child. You won’t be asked to sign anything. And it is totally fine [legally] if the hospital has this kind of policy.”

The parents were also shocked to discover that doctors had approved the insertion of a nasal feeding tube at the mother’s urgent requests, but had written in the charts “for comfort feeds only,” not for nourishment. They were outraged to learn that the so-called nourishment consisted of drops of sucrose, otherwise known as sugar water. The parents were utterly confounded when they learned their son had been administered drugs that were specifically contraindicated for someone with his condition.

“Every which way we turned, we were blind-sided,” Sheryl said. “We knew that morally and ethically what they were doing was wrong. They violated my rights as a parent.”

Sheryl, now in her mid-forties, has made it her mission to raise awareness about how Trisomy babies are discriminated against by the medical profession. She wrote a book about her experience titled “I’m not a Syndrome: My name is Simon” and has become fearless in telling her son’s story at medical conferences, nursing schools, faith-based communities, and on radio shows. LifeSiteNews covered Simon’s story in 2013.

While speaking at a Right To Life banquet in Kansas City, Missouri, three months ago, she met then Representative-elect Bill Kidd. The pro-life Republican was so moved by Simon’s story that he promised if he was elected his first bill would be to strengthen the rights of parents to be involved in the life-or-death medical treatment received by their children.

Kidd, a grandfather of six, told LifeSiteNews that after hearing Sheryl tell of Simon’s ordeal he “couldn’t believe” this was happening in hospitals across the country. Most people are not aware that a hospital may have a futility policy that could determine the fate of their loved one, he said, adding that the issue was especially pertinent to him since he had suffered the loss of his wife just three weeks prior to hearing Sheryl’s testimony.

“As a parent, you should be the one that has the final say about what happens to your child, not a detached third party, not a doctor, not a clinician, not a nurse, not a hospital administrator, not an insurance company,” he said.

Kidd, a Christian minister, defeated Democrat incumbent John Mayfield on a pro-life, pro-religious-freedom ticket November 4. He honored his word to Sheryl one month later, on December 3, when he filed House Bill #113, titled “Simon’s law,” with the Missouri House of Representatives to amend the state’s health and welfare statues (RSMo).

The bill also states that doctors cannot withhold or place any restrictions on “life-sustaining procedures including, but not limited to, food, medication, or nutrition” from any minor patient without the written permission of the minor’s parent or legal guardian.

The bill was filed on the exact anniversary of Simon’s death four years prior.

Kidd said the bill is not only aimed at involving parents in the welfare of minors with chromosomal abnormalities, but involving them in the outcome of any minor who enters the medical system.

“Theoretically, your child could be six years old and riding down the street on their bicycle, have a wreck, have a brain injury, and [doctors] could do this. There is no law that says a doctor cannot put a Do Not Resuscitate (DNR) in the child’s file,” he said.

Kidd criticized futility policies in hospitals that make doctors the arbiters of life and death as “morally and ethically incorrect,” adding that they “should be illegal.”

“The doctor should not be the determining factor when it comes to [the life or death of] your child,” he said.

Sheryl said the bill is for every parent.

The bill is expected to appear before committee in the coming months. Kidd is asking Missouri parents to contact their state representative and senator to ask them to support House Bill #113.

Editor’s note: Simon’s story is set to appear in a new documentary titled “Labeled” which brings to light the stories of parents across America who have watched their children — diagnosed with one syndrome or another — suffer from the denial of even the most basic medical care by professionals.

Trisomy Angel: The boy with a ‘divine purpose’ who taught his family the meaning of love