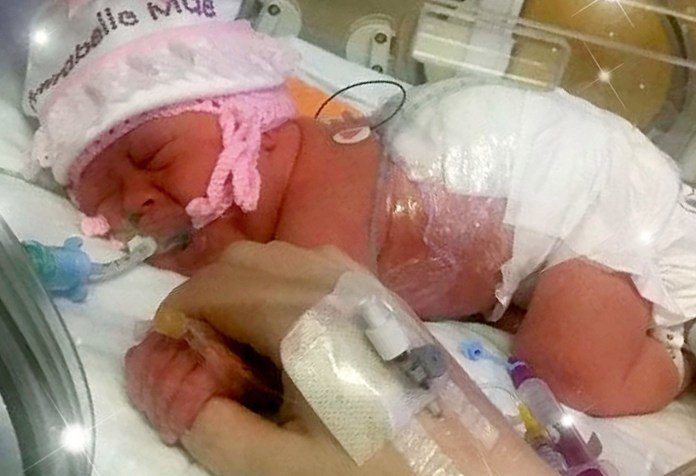 MANCHESTER, England, June 6, 2019 (LifeSiteNews) ― Baby Mirabelle has spina bifida and a mother willing to fight doctors for her life.

Yesterday, the UK’s Sun reported that Natalie Halson, 29, was repeatedly pressured by doctors to abort her unborn baby when a 22-week scan showed the child’s spine and spinal cord weren’t developing properly.

They told the young mum over the phone that her baby was doomed to a poor “quality of life,” but Halson didn’t believe them. After she hung up, she began to research spina bifida and found out that “there were options for (her) little girl.”

“I felt suddenly really angry that they'd made out I had none,” Halson told the Sun.

“If I’d not had that time to do my research I might have even agreed to the termination,” she continued.

Sadly, she was forced to fight for her right not to have the child killed.

“The medics just wouldn't take no for an answer,” Halson stated.

“It was so insistent even after I'd repeatedly said no, but it was getting offered a termination just weeks before she was born that really upset me.”

Halson described her unborn daughter as being “a proper little person at that point.”

“It was vile to think they just wanted me to get rid of her,” she added.

Halson said she was offered an abortion at every appointment she had up until the day the daughter was born ― “about 10 times in all.”

“But I am so glad I refused,” she concluded. “Mirabelle really is a miracle.”

Halson, who is an assistant radiographer, demanded that she have her 23- and 26-week scan at the world-famous Great Ormond Street Children’s Hospital in London, where a spina bifida specialist was based.

“Mirabelle wasn’t eligible for fetal surgery because her angulation of her spine was over the cutoff point,” she told the Sun, “but there was still the option for an operation to fuse the nerves in her spine once she was born.”

Mirabelle was born in December by emergency Caesarean at 38 weeks and taken to Alder Hey Children’s Hospital, where her spinal cord and spine were repaired.

“They operated on Mirabelle’s spine the day after she was born,” Halson reported.

“it was a horrible anxious wait as it lasted about 12 hours, but the doctors were really happy with her progress afterwards,” she added.

“They told me that they’d reattached all the nerves in her back like a zip. I was so emotional, I couldn’t stop crying.”

Spina bifida can cause total paralysis of the legs, but Mirabelle already responds to touch on her legs. Her mother takes her swimming twice a week and says her daughter will reach her developmental milestones “in her own time.”

Halson told parents of disabled children never to think that abortion is their “only option.”

“I would recommend to any parents who are advised to abort that it isn’t the only option, no matter what the hospitals try and tell them,” she said.

“And always go with your gut instinct, something inside told me that my baby was going to be OK – and look at her now, she’s perfect.”

Last October, the UK’s Society for the Protection of the Unborn Child (SPUC) published the harrowing story of a child with spina bifida who was born alive after his parents were pressured by doctors to have an abortion. He survived for an hour.