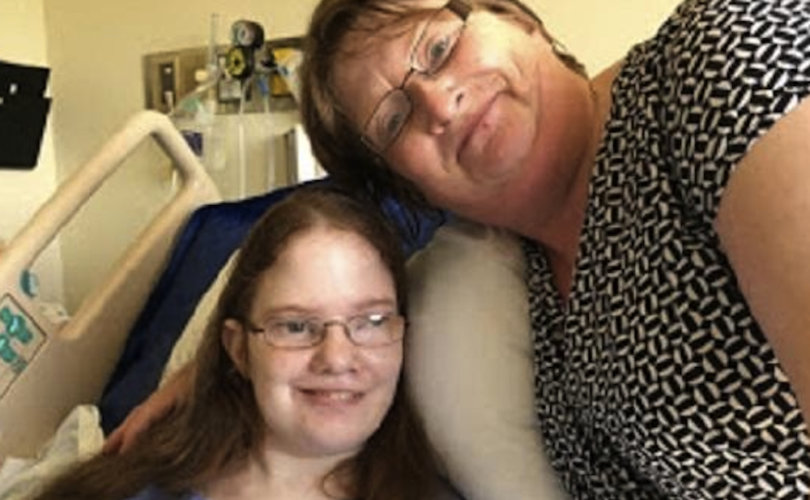 ST. ANTHONY, Newfoundland, July 26, 2017 (LifeSiteNews) — A Newfoundland mother wants an apology from the hospital where, she says, a doctor suggested her daughter should be euthanized.

Sheila Elson says she’s particularly upset because her 25-year-old daughter, Candice Lewis, overheard the conversation and has been traumatized, reports the Northern Pen.

Lewis has suffered since birth from a number of medical conditions, including spina bifida, cerebral palsy and chronic seizure disorder.

She was admitted to Labrador-Grenfell Health hospital at St. Anthony’s in September 2016, the Northern Pen reported.

Elson alleged that Dr. Aaron Heroux told her at that time assisted suicide was legal and her daughter qualified.

“This left me dumbfounded and I told him it was something I did not want to consider,” Elson told the Northern Pen.

She reiterated this to the CBC.

“The doctor wanted me to do assisted suicide death on her, told me that it was legal in Canada now and that he would like to help me with it,” she says in a CBC video. “To me it was, O my God, you’re going to kill your daughter.”

Elson told CBC: “I was shocked, and said, ‘Well, I’m not really interested,’ and he told me I was being selfish.”

When the CBC reporter asked Lewis what she felt about it, she replied, “I didn’t want to go, either.”

Elson told the CBC and Northern Pen that her daughter overheard the conversation in the hallway and has been distressed by it.

She wrote about the encounter in a November 21 letter to Barbara Molgaard-Blake, chief operating officer south region for Labrador-Grenfell Health, reports the Northern Pen.

“I am still very concerned about this, it is always on my mind,” Elson wrote.

“I am emotionally exhausted. I see that it has been also very stressful for Candice and one of my main reasons for writing this letter is that I don’t want any other family to have to go through this.”

Elson told the CBC that there were other troubling incidents, such as a nurse referring to Lewis as a “frequent flyer,” which she says was unfeeling.

Lewis, who has had 62 operations and requires 24-hour care, is capable of  communicating, reports the Northern Pen, but Elson expressed doubt in her letter that her daughter fully understands what assisted suicide is.

“She can make decisions like if she’s hungry, but when it comes to medical decisions, she’s not capable of making those decisions,” Elson wrote.

Molgaard-Blake did not respond to Elson until June 6, when she wrote the doctors involved didn’t intend any disrespect, the Northern Pen reported.

Elson described the letter as a joke, it reported.

Molgaard-Blake did not return a call from LifeSiteNews, but Allan Bock, chief communication officer for Labrador-Grenfell Health, sent the following statement:

Labrador-Grenfell Health is not permitted through privacy legislation to publicly discuss the details of individuals in its care. The Health Authority has been in contact with Sheila Elson and has offered her the opportunity to meet with members of her daughter’s care team at a time that is suitable to her.

The Liberal government’s Bill C-14, which legalized euthanasia in June 2016, “actually gave the power to the physician over life and death,” he said.

And once euthanasia is legal, “it’s natural” situations will come up “where some doctor thinks he’s helping someone by killing their daughter or by urging them to have their daughter die,” he told LifeSiteNews.

“I’m very pleased is that here is a mother who loves her daughter,” he added.

“Her daughter’s sick and she’s with her, she cares about her, and she’s shocked when somebody actually think that her daughter should be dead.”