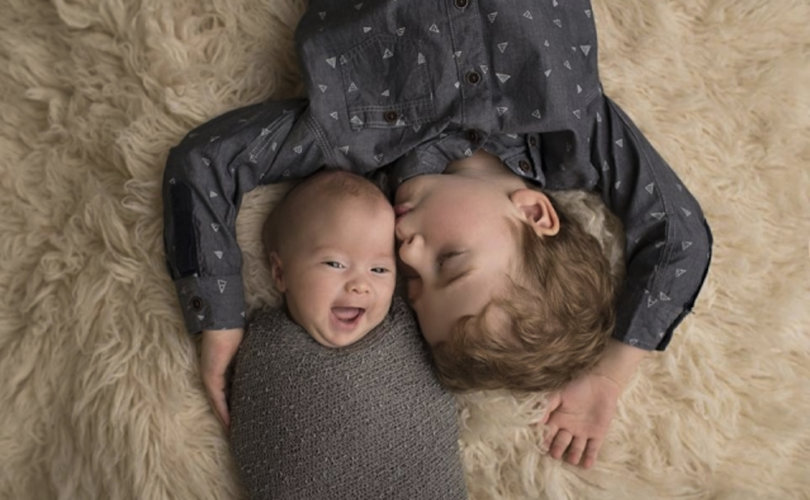 Benjamin and his big brother Jackson

August 7, 2017 (LifeSiteNews) — Catherine and Paul Harper had the most socially acceptable reason to abort their 20-week preborn baby.

Doctors diagnosed him with severe spina bifida, where his spinal nerves are uncovered, permanently damaging his brain, internal organs, and joints. Plus, the little guy had a malformed cerebellum where balance is controlled.

The experts said he probably would never walk, may not ever be able to control his bladder and bowel, and may be born with his head deformed to twice its normal size. Countless other handicaps would only be known after birth.

Catherine's doctor advised her to abort. “He didn't want us to suffer,” she empathized.

The Harpers were heartbroken but unfazed. “We thought, 'OK, well, he has this,'” the mother told Seven Sharp. “Does that change how much we're going to love him?  No.”

The couple dismissed the suggestion of abortion. Instead, they named him Benjamin.

The usual plan of action for those afflicted with spina bifida is major brain surgery and major spinal surgery right after birth, along with a battery of orthopedic interventions.  But through social media, Catherine found experts in Australia who suggested prenatal fetal repair, which had never been tried on a “Kiwi” (New Zealander) baby.

The odds were against Benjamin because the procedure had never been attempted in New Zealand — and had only been done twice before in Australia. On top of that, the window of opportunity was only open a moment. The operation could not be done after 25 weeks.

Catherine went into action to save her son. The Harpers worked out innumerable details with the Australian surgical team. They appealed to the New Zealand government to cover the high cost of the surgery. Their family launched a major fundraising campaign for travel costs. Catherine underwent a series of preliminary tests in Australia.

Then came the wait to hear back from specialists in the United States, who analyzed the data to decide if the Australian doctors should go ahead. The call came on Christmas Eve. Dr. Glenn Gardener of Mater Hospital in Brisbane simply said, “He's an angel!”

The Harpers were given a green light, and the delicate surgery was scheduled for December 29.

But it was the Christmas holidays and spina bifida surgery requires a large team of medical experts.

“Nearly all his staff were on leave, but they all came back for it,” Catherine exclaimed.  “They were fantastic.”

Thanks to many fervent prayers, the delicate prenatal surgery was a success. But Benjamin and his selfless mother were not out of the woods yet. Both went into a kind of intensive care, with Catherine on constant bed rest for nearly three months.

Initial tests were encouraging. The first scan after surgery showed — to the amazement of doctors — the fluid buildup on Benjamin’s cerebellum had gone significantly down.

Little Benjamin did not wait the hoped-for 37 weeks. Amniotic fluid began leaking at 33 weeks and tiny Benjamin entered the world on March 1.

Doctors had given the baby steroids to strengthen him, and he came out a loudly screaming, kicking bundle of joy. He didn't even need oxygen.

Tests continue to show positive results. Benjamin has undergone three operations since birth, including one to drain fluid from his brain stem. But his cognitive function is high, and his bladder and bowels function normally.

Catherine and Paul say their handicapped son has proved a life-changing blessing. They call tiny Benjamin their “teacher,” as he has already instructed all who cross his path about selfless love, sacrifice, redemptive suffering, and personal empathy.

Big brother Jackson “is always kissing him,” Catherine said. “He tells Benjamin, 'I am going to teach you how walk, and how to run!’ His little brother has taught him empathy.”

Catherine’s sacrifice to save her baby left her physically weakened but spiritually stronger.

“People have said to me that they couldn’t handle the challenges, the suffering,” Catherine confided, “but I would say that you can’t tell until the situation is right in front of you. Don’t underestimate yourself.”

And the busy mother of two has become a pro-life advocate for spina bifida babies.

“Eighty percent of these babies are aborted” in New Zealand, she lamented. “I can understand why: the professional attitude is that you are vulnerable, and it costs a lot.”

Nevertheless, Catherine encourages prospective mothers to give life. Medical breakthroughs like laparoscopic fetal surgery are making recovery easier. Plus, Catherine reasoned, the more mothers give birth to spina bifida babies, the more the medical community will work for even greater breakthroughs.