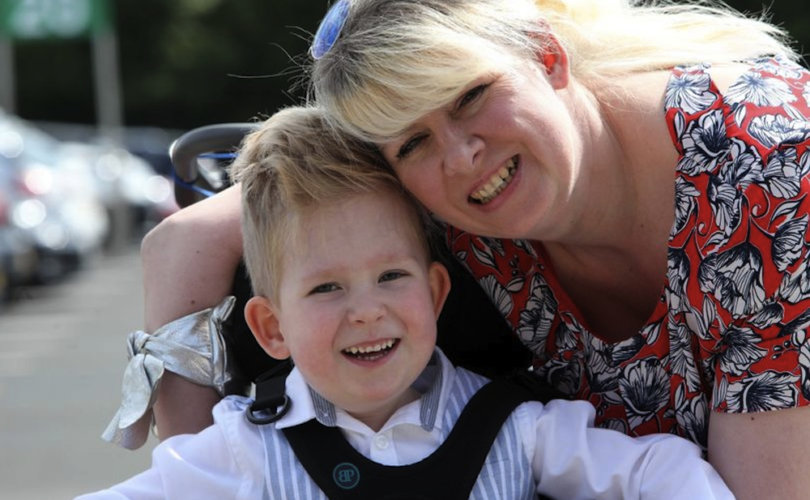 ABBEYTOWN, England, February 20, 2017 (LifeSiteNews) — Shelly Wall received the news that no pregnant woman should hear: Her baby would not survive.

Doctors told Shelly that the baby inside her — a boy — not only had Spina bifida but also had developed a rare complication of the defect. Hydrocephalus caused his skull to fill with fluid, stopping his brain from growing.

Physicians told Shelly and husband Rob that the baby would not live and urged them to abort him. They refused. Experts told the Walls that even if their baby survived birth, he would die soon after. They still would not consider aborting him. Surgeons told Shelly that even if he lived, he would be severely physically and mentally handicapped.

The couple, who already had a teenage daughter, was advised by professionals five times to abort their child. Each time they refused.

But the Walls did follow their doctor's advice and plan for the worst while praying for the best. Shelly and Rob planned their little boy's funeral before he was even born. “I'd never seen a baby's coffin before,” Shelly said.

The Hydrocephalus prognosis was, tragically, correct. When tiny Noah was born, he had less than two percent of a brain.

Little Noah was rushed into emergency surgery immediately after birth to close the opening at the bottom of his spine and to drain fluid from his empty brain cavity.

The surgery was successful beyond anyone's hopes. As time went on, Noah's brain began to grow into its cavity.

Today, Noah is a “chatty” little four-year-old, always smiling and very happy. He can count to 10 and hold a pen, is learning to read and write, and interacts socially with others at his local primary school.

He asks his mother, “You alright?” in reaction to Shelly's tears as she latches his leg braces.

The Mirror reported that Noah's brain “is developing beyond all expectation.” In fact, brain scans dramatically showed Noah's empty cranial cavity at birth and then at three years old, when his brain had expanded to 80 percent of normal.

One key to Noah's miraculous mental advancement is his family. Shelly, Rob, and sister Steph (23) “work hard to always be around him. They continually keep his brain stimulated to aid its growth.”

Spina bifida caused Noah to be paralyzed in the lower half of his body, but several hip surgeries are giving the Walls hope that Noah may one day walk.

“We're determined that Noah will be able to walk” either with or without mechanical aids, his proud and heroic father Rob declared.

Noah's life-saving neurosurgeon, Dr. Claire Nicholson of Newcastle’s Great North Children’s Hospital, summed up the lesson from Noah's story. “He teaches the medical profession,” she said, “that you can't ever know.”