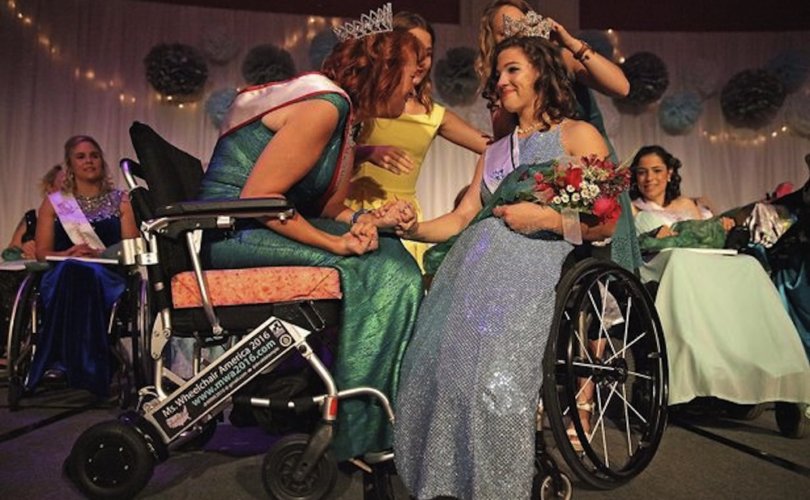 GRAND RAPIDS, Michigan, August 22, 2016 (LifeSiteNews) – A young woman whose parents were told to abort her because of an adverse prenatal diagnosis has gone on to defy the odds in more ways than one, competing in the U.S. Paralympics, breaking a Guinness world record and just last week being crowned Ms. Wheelchair America.

Doctors told Eliza McIntosh’s parents that she would be in a vegetative state, need a breathing tube and have no quality of life, and so they should abort.

“But my parents are very religious, so are against abortions regardless,” McIntosh said, “and their attitude was, 'This is the hand we've been dealt with, so we'll play it as well as we can'.”

The 21-year-old Salt Lake City, Utah, woman was born with spinal dysgenesis, leaving her paralyzed from the waist down, the Mirror Online reports, but her parents went forward, meeting their child’s needs as best they could, imparting to her the fortitude to succeed.

“They weren't going to let me die,” McIntosh said. “They decided to modify our home to make it more accessible and have never treated me any differently.”

“Both of my parents have always been a great inspiration,” she said. “They never told me I couldn't do anything; we've always found a way around any difficulties I've had.”

And it has not stopped McIntosh. She began playing wheelchair basketball at age 8 and went on to achieve other notable athletic feats, using her 2011 Guinness World Record attempt at the longest distance traveled while doing a wheelie as a fundraiser.

After being crowned Ms. Wheelchair America 2017 on August 13, McIntosh said she wanted to use her title to show people — in particular the men and women who use wheelchairs — that no matter what their goal is there is a way to achieve it.