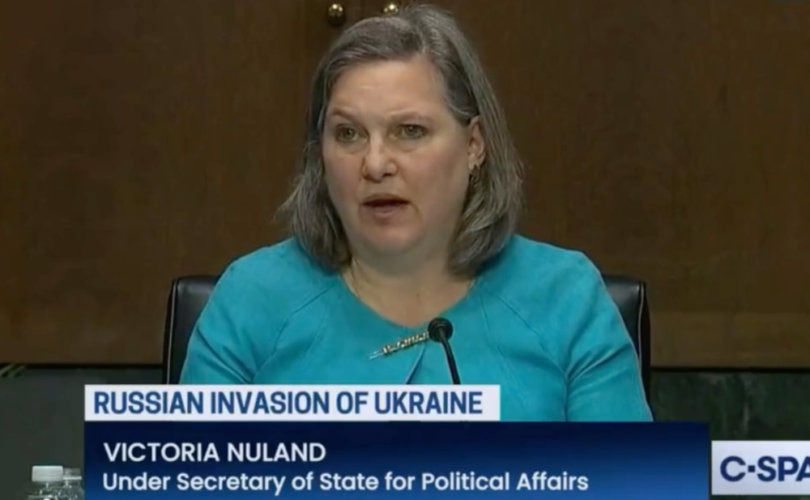 The National Pulse reported March 8 it had unearthed a since-deleted 2010 article showing that then-Sen. Barack Obama had been involved in setting up a laboratory since 2005 — the Interim Central Reference Laboratory in Odessa.

“The level-3 bio-safety lab, which is the first built under the expanded authority of the Nunn-Lugar Cooperative Threat Reduction program, will be used to study anthrax, tularemia and Q fever as well as other dangerous pathogens,” read the article.

As noted by The National Pulse, the Odessa-based bio-lab was referenced in a 2011 report (from the U.S. National Academy of Sciences’ Committee on Anticipating Biosecurity Challenges of the Global Expansion of High-Containment Biological Laboratories), explaining how the laboratory “is responsible for the identification of especially dangerous biological pathogens.”

The lab was “reconstructed and technically updated up to the BSL-3 level through a cooperative agreement between the United States Department of Defense and the Ministry of Health of Ukraine,” noted the Committee’s report. “The collaboration focuses on preventing the spread of technologies, pathogens, and knowledge that can be used in the development of biological weapons.”

Another document outlines the pathogens studied in the bio-lab, including Ebola, Marburg virus, as well as “viruses of pathogencity group II by using virology, molecular, serologica and express methods.”

The presence of such U.S.-assisted bio-labs in Ukraine has been cause of debate since Russia’s invasion. A March 2 fact check article strongly denied the existence of any U.S. owned bio-weapons labs in Ukraine, but did not deny a U.S. collaboration with Ukraine in running and funding “public health, animal health, and food safety labs.”

Additional fact check articles stated that “there are no US-run biolabs in Ukraine,” while not rejecting wider U.S. collaboration with Ukraine in such laboratories.

However, at a Senate hearing March 8, Undersecretary of State Victoria Nuland confirmed the existence of bio-labs in the country, appearing uncomfortable while answering if Ukraine “has biological or chemical weapons.”

“Ukraine has biological research facilities which in fact we are now quite concerned Russian troops may be seeking to gain control of,” Nuland said. “So we are working with the Ukrainians on how they can prevent any of those research materials from falling into the hands of Russian forces should they approach.”

Ukraine has “biological research facilities,” says Undersecretary of State Victoria Nuland, when asked by Sen Rubio if Ukraine has biological or chemical weapons, and says she’s worried Russia may get them. But she says she’s 100% sure if there’s a biological attack, it’s Russia. pic.twitter.com/uo3dHDMfAS

A number of commentators have questioned why Nuland would be “so concerned Russia would seize such a benign ‘biological research facility,’” suggesting that her testimony in the Senate was not an honest appraisal of the U.S. involvement in the laboratories, or the content of the labs themselves.

It literally took a week to go from there are no biolabs in Ukraine to “oh shit we’ve got caught, let’s pretend we have to protect them from Russia” pic.twitter.com/gU9X9P4Zrf

U.S. officials, including Sen. Marco Rubio (R-FL) who questioned Nuland, have described any such speculation about the labs as being part of “Russian propaganda.”

But in response, Russia’s Foreign Ministry Spokeswoman Maria Zakharova claimed March 8 that “the Kiev regime was found to have been concealing traces of a military biological programme implemented with funding from the United States Department of Defence.”

She said that “documentation” had been discovered ordering the “urgent eradication of highly hazardous pathogens of plague, anthrax, rabbit-fever, cholera and other lethal diseases.”

Zakharova also claimed that “components of biological weapons were being developed in Ukrainian laboratories,” and accused the U.S. and Ukraine of violating Article I of the Biological and Toxin Weapons Convention, which forbids the development, production, or retention of “biological weapons.”

While further details about the evidence regarding the bio-labs in Ukraine continues to be unraveled, attention will likely be drawn once again to U.S. funding of such facilities across the world. An increasing amount of documents have now been revealed, noting the U.S. — particularly Dr. Anthony Fauci’s — involvement in funding gain-of-function research in the Wuhan laboratory in China, from which COVID-19 is thought to have come.