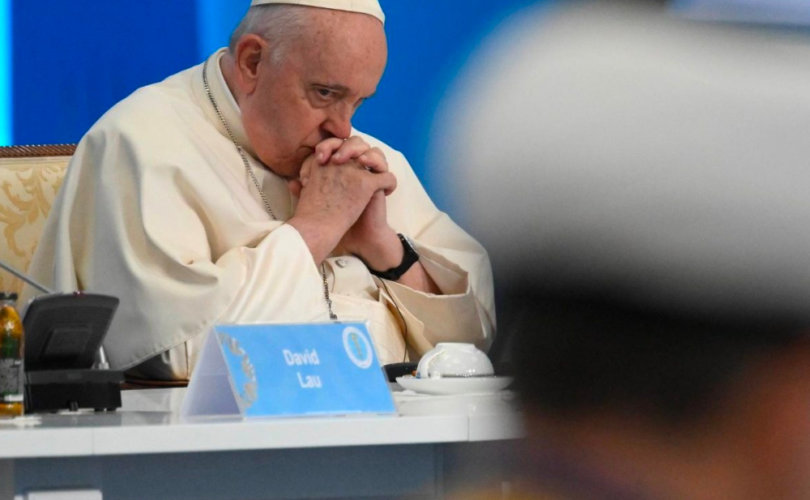 NUR-SULTAN, Kazakhstan (LifeSiteNews) – In a peculiar turn of events, the ecumenical Declaration read out and signed by Pope Francis at the 7th Congress of Leaders of World and Traditional Religions held in Kazakhstan, has since been changed. The original version appeared to go against Catholic teaching, and it is not known if Pope Francis agreed to the updated version.

The original version of the Declaration was read aloud by Anglican prelate Dr. Jo Bailey Wells in front of assembled leaders of the Congress, including the Pope. It was also live-streamed by media outlets, including Vatican News and EWTN.

Paragraph 10 of the document originally read: “We note that pluralism and differences in religion, skin color, gender, race and language are expressions of the wisdom of God’s will in creation. Thus any incident of coercion to a particular religion and religious doctrine is unacceptable.” (Emphasis in original)

As LifeSiteNews noted earlier today, this passage echoed Pope Francis’s Abu Dhabi document word for word – a document which faithful Catholics expressed strong concerns about. It was even described at the time of publication as seeming to “overturn the doctrine of the Gospel.”

A recording of the pronouncement can be found below.

However, following the live-streaming of the document’s pronouncement, and its subsequent publication on the Congress’s website, the document was updated some hours later.

The new passage now reads: “We note that pluralism in terms of differences in skin color, gender, race, language and culture are expressions of the wisdom of God in creation. Religious diversity is permitted by God and, therefore, any coercion to a particular religion and religious doctrine is unacceptable.” (Emphasis in original)

The new text represents a significant change in the theology of the document.

.@Pontifex please can you explain why changes were made to Point 10 of the Final Declaration?

There is a significant difference between the text of Point 10 read out to the Congress by Dr Jo Bailey Wells & that published on the Congress’ website pic.twitter.com/LL63n4Ej6p

Local auxiliary bishop of Astana, Bishop Athanasius Schneider had previously expressed his concerns about the wording of the Abu Dhabi document to Pope Francis, wording which was almost exactly repeated in the Kazakhstan declaration. Bishop Schneider was later told in a private meeting with Pope Francis in 2019 that the text only referred to “the permissive will of God,” not the positive will.

Yet the auxiliary bishop noted that by implementing the Abu Dhabi document without correcting its erroneous affirmation on the diversity of religions, “men in the Church not only betray Jesus Christ as the only Savior of mankind and the necessity of His Church for eternal salvation, but also commit a great injustice and sin against love of neighbor.”

With the change of the Kazakhstan text it seems that the published version is now more in line with that which Pope Francis confided to Bishop Schneider privately in 2019.

However, it remains unclear whether Pope Francis gave his agreement to the updated version or just the original. The updated Declaration was only published by the Congress after the papal flight was well on its way back to Rome.

— Article continues below Petition —
PETITION: We won't give any money to liberal bishops who attack the Faith
Show Petition Text
11460 have signed the petition.
Let's get to 12500!
Thank you for signing this petition!
Add your signature:
Show Petition Text

While it is possible that Francis may have agreed to the updated version in private, the only public record of the Declaration being read aloud is of the original version.

Media reports note that the Pope signed the original version of the document, but make no mention of his assent to the updated text.