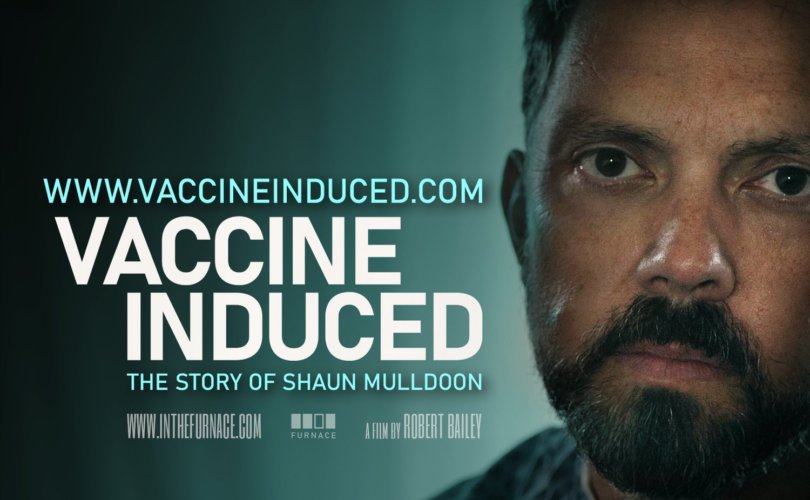 (LifeSiteNews) — A short documentary telling the story of a Canadian man’s jab-induced life-threatening illness has been released in hopes of protecting children from a similar fate.

The film “Vaccine Induced” tells how Shaun Mulldoon’s life and unquestioning view of “vaccines” were turned upside down after an AstraZeneca shot led to a brush with death, and a now-constant battle with potentially life-threatening blood clots.

“It’s the worst mistake I’ve ever made in my life,” Mulldoon shared in the film. He explained that he took the AstraZeneca shot with trust that the medical establishment had families’ “best interests at heart” when they declared its safety.

Mulldoon said that for him the jab was not so much about protecting himself as it was about doing his “part” to help end the COVID-19 outbreak. He alluded to the public message that it was not until the “vast majority of the population” got both their shots that they would “get through” the virus.

“It was like I thought I was going in for a vitamin B12 shot. I absolutely never for a second thought that they’d inject me with something that might potentially kill me, which is exactly what they did,” Mulldoon shared.

What started as a feeling like his stomach was “in a knot” about a week after his COVID shot evolved into an excruciating pain. “It felt like my insides were just being ripped apart inside my body,” Mulldoon said.

After exploratory surgery at the hospital, doctors “immediately found a bunch of dead intestine” and removed about two meters of intestine to save his life. The culprit was blood clotting, eventually determined by doctors to have been caused by his AstraZeneca “vaccine.”

Mulldoon was diagnosed with vaccine-induced immune thrombotic thrombocytopenia (VITT), in which the immune system develops antibodies to blood platelets, producing blood clots all over the body.

“VITT is phenomenally dangerous. It’s devastating. It kills you very quickly,” Mulldoon explained. He added that his body is still producing antibodies a year later, forcing him to fight the resulting blood clots with short-term remedies like blood thinners.

Despite the admitted risk of life-threatening and debilitating illness and numerous reports of jab-induced death, Canadians and others across the world — including Mulldoon’s own wife — continue to be threatened with an ultimatum: Get the jab or lose your job.

After he spent weeks in the ICU due to VITT, Mulldoon’s wife received a letter ordering her “to go get a jab or you’re fired,” Mulldoon recalled.

While Canada paused the rollout of AstraZeneca shots in 2021 due to reports linking them to blood clots, Canada’s most populous province soon after resumed their distribution, citing U.K. data allegedly showing a “much-reduced risk” of blood clots in second doses.

Officials also said they didn’t want to “waste” the more than 50,000 doses of AstraZeneca that were set to expire at the time, according to the Associated Press (AP).

In fact, reports of potentially and actually lethal blood clots associated with the AstraZeneca “vaccine” were numerous enough that at least nine countries, including France, Italy, and Germany, halted the distribution of these shots.

Despite such widespread recognition of the dangers of the AstraZeneca jab, Health Canada issued a public advisory in March 2021 denying there was any evidence that the shot caused adverse side effects.

“Health Canada is aware of reports of serious adverse events in Europe following immunization with the AstraZeneca vaccine but wants to reassure Canadians that the benefits of the vaccine continue to outweigh its risks. There is currently no indication that the vaccine caused the observed events,” the advisory declared.

The timing of the “Vaccine Induced” documentary, according to filmmaker Robert Bailey, was motivated by the promotion of the COVID shots for young children. Bailey says he felt “morally compelled” to create the film with “the clock … ticking” and “babies’ injections [on] the way,” his film site explains.