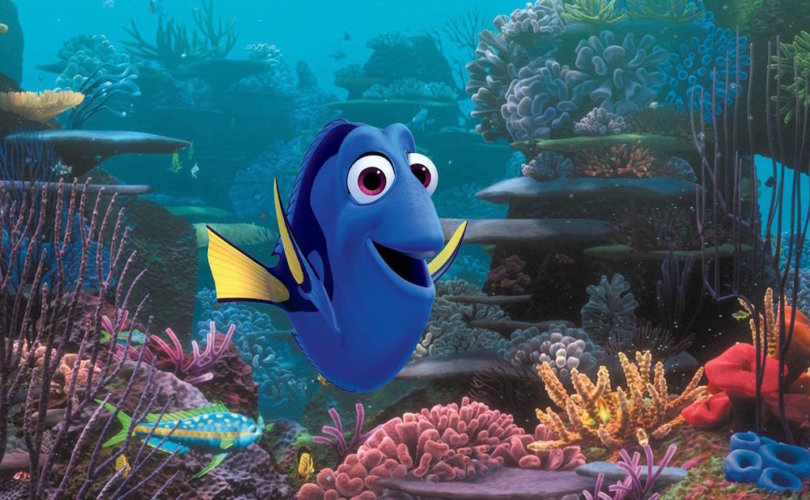 HOLLYWOOD, May 30, 2016 (LifeSiteNews) – The LGBT movement is all atwitter at the prospect that the much anticipated, much-promoted animated family film Finding Dory will include a lesbian couple when it hits America’s theatres June 17.

Billed as a sequel to the 2003 hit Finding Nemo, in which Dory had a supporting role, and set in the same bright, world of wisecracking tropical aquatic life, Finding Dory is produced by Pixar Animation Studios, a subsidiary of Walt Disney Pictures. The title fish, a young Blue Tang that has forgotten where its parents are but knows terms such as “short-term memory loss” and “date night,” is voiced by talk show hostess Ellen Degeneres.

The fact that Degeneres came out as a lesbian in 1997 perhaps attracted extra LGBT attention to the second promotional trailer for Finding Dory which aired for the first time on her own show, Ellen, earlier in May.

The two-and-a-half minute preview appears to reveal the whole plot including the happy ending but at the 1:08 point shows an octopus jumping into a baby carriage to the consternation of two young women nearby. Are they best female friends or a lesbian couple whose child has been displaced from the carriage? Given the movie’s frenetic pace, their appearance could be fleeting and their relationship undeveloped. The trailer does not reveal the answer.

“If this is a lesbian couple, Great. Way to move forward into the 21st Century,” said one blogger, Lonnie Gleason. And  @Skyleigh_Ann echoed,  “If the rumors are true and the first lesbian couple in a disney movie ever is in #FindingDory YAY for a big important step to acceptance!!!!”

Salon’s Nico Lang commented, “If audiences are perhaps jumping the gun in anticipation of this possible milestone, it’s because queer people are desperate and hungry for more than we’ve been given in the past.”

The hope in some quarters that homosexual characters will feature prominently in Hollywood movies has been enlivened by the appearance of two male leads in Star Wars: The Force Awakens, Poe and Finn, who develop a close bond in the film and lack obvious female love interests. The series’ current director coyly indicate his openness to the homosexual idea.

Promoters of LGBT interests started a Twitter campaign a few weeks ago lobbying Disney to give Elsa, the lead character from the animated film Frozen, a same-sex partner in Frozen II. Last week a second Twitter effort began urging Disney to do the same for Captain America. The writers of Captain America have also made encouraging noises.

Matthew Philbin, managing editor of the Virginia-based, conservative-minded Culture and Media Institute, told TheChristians.com recently that putting homosexuals in movies for general release is risky, since “the values they have in Hollywood and New York City [are] not [those]of the people in between, who are a big part of people they want to buy their show.”

The money at risk in a movie, moreover, is far bigger than in an ongoing TV show, whose unpopular characters, moreover, can be removed.

There are bigger risks than those, Philbin warns. “Hollywood is willing to insert characters and storylines to absolutely advance their worldview. And while most people manage to sit through shows whose values they disagree with, if they keep doing that, gradually they end up accepting those values.”