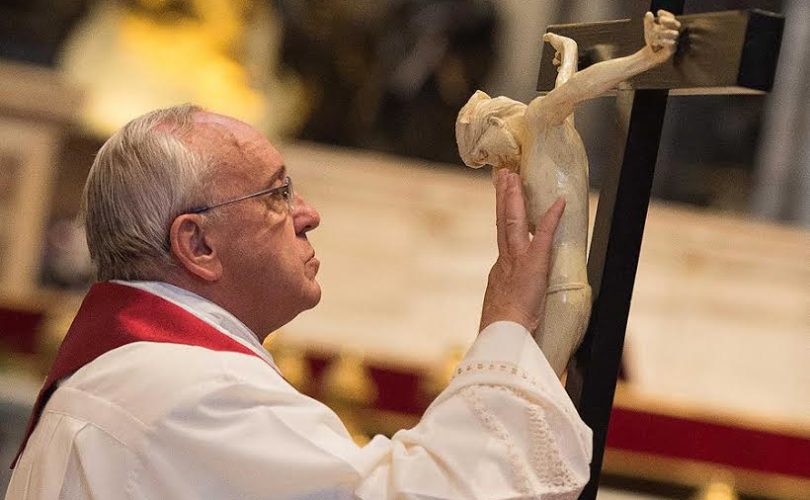 ROME, December 23, 2019 (LifeSiteNews) — In an apparent repudiation of the Great Commission to baptize and teach all nations (Matthew 28:16-20), Pope Francis has recently told a group of high school students in Rome that speech should never be used in order to convince a non-believer of the truths of the Catholic Faith.

Citing a fictional 11th century account of an episode of forced conversion, attributed to the eighth century emperor Charlemagne, Pope Francis implied that the belief that positive efforts should be made to convert non-Christians to the Gospel through argument entails coercion to the faith.

The Pope’s remarks came during a visit with students of Rome’s Pilo Albertelli classical secondary school on Friday, December 20. According to Avvenire, the official newspaper of the Italian Bishops’ Conference, school administrators have sought to help students understand the many issues involved in the inclusion of the thousands of those arriving in Italy who are reportedly fleeing war, poverty, and famine. The Pope’s visit preceded a December 21 daylong series at the school on migration.

Describing the fictional passage that recounts the forced conversion of Muslims in the Song of Roland, he said, “This happened in history! … What happened here to me is shameful because it is a story of forced conversion, of disrespect for the dignity of the person.”

A theologian whom LifeSite consulted said that “although Charlemagne was guilty of attempting forced conversion, this occurred in Saxony and not in Islamic Spain, and he was rebuked for this by leading Churchmen of the day, including his adviser Alcuin.”

Nor has the Church, as Pope Francis seems to imply, ever permitted forced conversion. The Second Vatican Council concedes that some individual Christians have behaved in an unacceptable manner, but “the doctrine of the Church that no one is to be coerced into faith has always stood firm” (Dignitatis Humanae, 12).

Pope Francis is strident in his opposition to the verbal communication of Christianity.

“I have to live in accordance with my faith. And it will be my testimony that will awaken the curiosity of the other who says: ‘But why do you do this?’ And that’s where I can talk. But listen, never, ever advance the Gospel through proselytism. If someone says he is a disciple of Jesus and comes to you with proselytism, he is not a disciple of Jesus. We shouldn’t proselytize, the Church does not grow from proselytizing.”

Commenting on the Pope’s exchange with Roman high schoolers, the theologian consulted by LifeSite said, “Instead of converting non-believers, Pope Francis insists that our message to the non-believer should be: ‘Be consistent in your faith and that consistency is what will make you mature.’ Pope Francis seems to see the various confessions as a variety of cultural patrimonies, not as competing claims concerning the truth about God,” he observed. “Insofar as passage from one religion to another is permissible, it will come only because one person’s patrimony, lived well, becomes for another person an interesting lifestyle choice.”

“It would be as inappropriate for a Catholic to try to convert a Muslim to Christianity as it would for a German to try to convince a Frenchmen to repudiate his nationality and become German,” he added. “Whereas for Benedict Christianity is precisely the religion of the Logos, the Word or Reason, because it is in accordance with reason and so communicable through speech instead of violence. The way you turn bits of France into Germany is by invading France, but the way you convert Pagans to Christianity is by preaching the Gospel.”

Ironically, although Pope Francis cites Pope Benedict in defense of his position to the high schoolers, it was Pope Benedict who famously pointed out in his Regensburg address that the denial of absolute truth inherent to Islam and liberalism makes reason and argumentation impossible, and persuasion indistinguishable from violence.

In his December 20 remarks to students in Rome, Pope Francis said he was deeply affected by his experience of multiculturalism in the Argentina of his youth.

“‘There is a Jew, ah Russian … Come on, come on! I’m the friend of the Russian!’ They said Russian because the majority of Jews came from Odessa, some from Poland but the majority from Odessa. Then there were some Arabs, Lebanese, Syrian … ‘Ah, Turkish! Come on, come on!’ This one was Mohammedan; this one was Jewish … But we all played football together. We were all friends. This taught me so much, that we are all the same, all children of God, and this purifies your gaze, it humanizes it.”

Pope Francis has often mentioned his hostility to proselytism but on this occasion, he seems to have clarified that for him “proselytism” consists in any kind of communication of the Gospel using speech.

His words to high schoolers take on added significance in light of the Global Education Pact that Pope Francis plans to sign with political and religious leaders in May 2020. A Vatican-backed website launched to promote the pact states: “Educating young people in fraternity, in learning to overcome divisions and conflicts, promote hospitality, justice and peace: Pope Francis has invited everyone who cares about the education of the young generation to sign a Global Pact, to create a global change of mentality through education.”

During his visit to the Roman high school, the Pope was also asked about a new book titled “The Solitude of Pope Francis.” The Pontiff said he hadn’t heard of it, but one needed to distinguish between two kinds of solitude: loneliness that leads one into “melancholy” or “thoughts about how to hurt others,” which is bad, and spending a bit of time with yourself, which is a good thing.

“A little solitude with myself, everyone must have it, with himself. What happens in my interior life. A little, but too much is not good.”

What place God’s presence has in such self-reflection was not explained to the students.

Asked why world security is defended by means of the military, and if in a just world there would be no armies, Pope Francis told students that his “clearest answer” on the matter could be found in his December 20 video-message with United Nations Secretary-General António Guterres in which he denounces war and poverty and says we need to live as “a single human family and to care for our earth.”