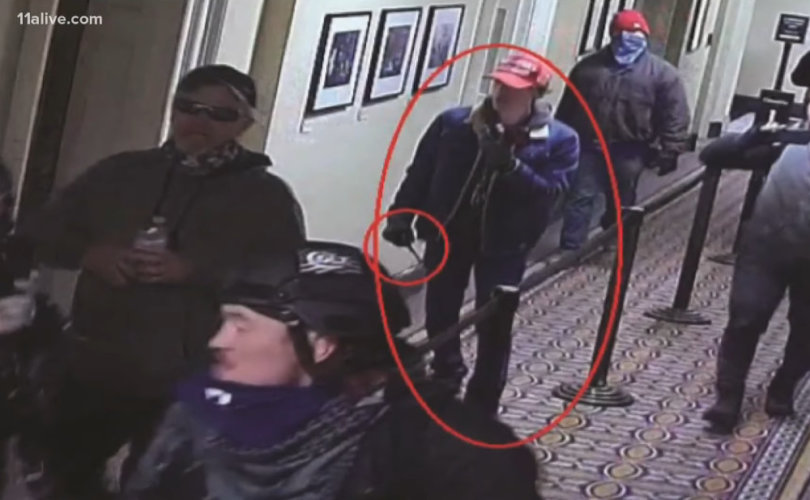 MILTON, Georgia, March 10, 2021 (LifeSiteNews) — An 18-year-old homeschool student has languished in prison since February 5, for his participation in the U.S. Capitol breach of January 6, and, as suggested by prosecutors, for his disbelief in the outcome of the 2020 presidential election.

Bruno Joseph Cua, who remains the youngest of around 300 people arrested thus far under the U.S. Department of Justice’s “unprecedented” investigation into the events of that day, by all accounts is not unlike other adolescents. According to an American Greatness (AG) report, “neighbors, family friends, and classmates describe him as hard-working, kind, respectful, and patriotic.”

He likes to fish, build tree houses, and is “not into drugs or alcohol — his biggest high last year was organizing Trump truck rallies in his community.” As AG’s Julie Kelly describes, similar to “many teenagers interested in politics, Bruno is a bit of a rabble-rouser and social media loudmouth.”

Prior to his travels to Washington with his mother and father to attend President Donald Trump’s rally, Bruno was completing his high school diploma in an online school program. His mother left her veterinary practice years ago to homeschool Bruno and his two younger siblings.

Following Trump’s speech, the Cuas walked with the crowd to Capitol Hill, and Bruno, having asked permission of his parents to see what was happening closer to the Capitol building, made his way in.

Several videos of the day’s events show Capitol police removing barricades, functionally inviting crowds into the building. Thus, many such protestors thought they were allowed to be on the premises, and, as one expert stated, security “knew it was going to be [an] enormous [crowd] but they didn’t do any preparation to control [it].”

Under such conditions, sociologists will explain that principles of crowd psychology are predictable and begin to influence personal conduct due to the perception of a “universality of behavior” resulting in a perceived loss of individual responsibility.

An adolescent like Bruno Cua would be considered far from immune to such influence. And thus, as explained by Kelly, he certainly did act badly. “He climbed on scaffolding outside the Capitol building and went into areas he should not have entered.”

He also sent out some “alarming” social media posts. Following the Capitol breach, the teen posted on Parler that he “stormed the capital [sic] with hundreds of thousands of patriots. Yes we physically fought our way in.”

After his arrest by the FBI, the high school student was indicted by a grand jury on 12 charges “including assaulting a police officer and possessing a ‘dangerous or deadly’ weapon.” After languishing for three weeks in solitary confinement, he was transferred to Oklahoma City, where he shared a cell with 30 other inmates, and “like the families of dozens of January 6 defendants, has been denied the opportunity to post bail.”

With his trial scheduled for May 10, there is a chance Bruno may have to remain behind bars until that time, unless Obama-appointed U.S. district court judge Randy Moss decides to release him to his parents.

According to Kelly, “Moss seems inclined to side with government lawyers who insist Bruno is a danger to the community based on social media posts expressing outrage at the election, mocking Democrats including Joe Biden, and encouraging protestors to bring ‘pepper spray, tasers, baseball bats’ to the capital — big talk for a kid traveling with his mom and dad.”

These federal prosecutors believe that his rants on social media make him a threat to the nation. “This small sample of public social media posts on the platform Parler by the defendant in this case evinces a full picture of who this defendant really is: a radicalized man with violent tendencies and no remorse for his participation in the violent insurrection that occurred at the U.S. Capitol,” wrote assistant U.S. Attorney Kimberly Paschall, objecting to Bruno’s pretrial release.

In addition, the teenager’s refusal to accept that Joe Biden was duly elected to the presidency, provides further proof in the view of prosecutors that he should remain in jail: “The offenses committed by the defendant illuminate characteristics inconsistent with a person who could follow orders given by this Court, or indeed, any branch of the federal government. The defendant has espoused disbelief in the outcome of the 2020 Presidential election, and violently acted on that world view,” they wrote.

Kelly affirms that the “government, both judges and lawyers, routinely cite a defendant’s doubt about last year’s election as evidence of wrongdoing.”

However, even though some of Bruno’s social media posts can be reasonably classified as alarming, they do not violate the law.

Further, given his three weapons charges, including his carrying a short baton into the building which he did not use against persons or property, along with several trespassing misdemeanors, Kelly writes “evidence presented in charging documents is shockingly thin, considering he’s been incarcerated for one month.”

“Does his conduct merit the necessity of a first-time offender spending months in jail even before he has a chance to defend himself? Absolutely not,” she writes.

Though investigators accuse Bruno of shoving a police officer in a hallway, the officer in question cannot recall what the perpetrators looked like.

In their petition for pretrial release, Bruno’s attorneys argue that the adolescent “is not alleged to have participated in the violent breach of police lines, breaking windows, or otherwise forcefully entering the Capitol … He is not accused of using the baton or engaging in any other physical violence, property damage, or theft.”

Besides considering Bruno a threat, prosecutors have also targeted his homeschooling parents Joseph and Alise Cua, suggesting they brainwashed their son since he did not attend school outside the home.

“I don’t believe that home incarceration will work because he is an 18-year-old who’s homeschooled,” assistant U.S. Attorney Ryan Buchanan told a magistrate judge last month. “And so this case did not arise out of him traveling or going different places. It’s simply these things that he has ingested, not just from the Internet.”

Thus, Buchanan continued, “they are not suitable custodians in part because they may have participated in some of this activity as well.”

“It has everything to do with punishing a family who dared to show up in support of Donald Trump and dared to question the legitimacy of the 2020 election.”

“The Justice Department, which acts more like a consigliere for the Democratic Party than an impartial enforcer of the rule of law, wants to ruin the Cua family and send a message to others,” she wrote.

In 2012, an Obama administration official, Al Armendariz, was forced to resign after proposing that his agency, the Environmental Protection Agency (EPA), should adopt a policy of “crucifying” random citizens in order to terrorize the population into compliance with harsh regulations.

Armendariz said, “The Romans used to conquer little villages in the Mediterranean. They’d go into a little Turkish town somewhere, they’d find the first five guys they saw and they would crucify them. And then you know that town was really easy to manage for the next few years.”

As one commentator observed, this “official’s rant confirms what many of us already knew about the Obama Administration: they imagine themselves to be the rulers of conquered territories populated by restless barbarians who must be subjugated at any cost, complete with indiscriminate and severe exemplary punishments.”

While thought crimes against election fraud continue to be pursued by the Biden Administration’s Justice Department, the evidence for such crimes remains quite significant.

In a recent plea for mercy, the 18-year-old Bruno submitted a letter to Moss conceding, “I was wrong. If you find it in your heart to … release me, I will dillegently [sic] abide by any and all conditions the court places on me. All I ask is that you please allow me to be reunited with my loving family so we can figure out the next steps before I stand trial. I promise I will not step one foot out of line, I miss my family more than anything in the world, I have never been away from them like this … I just want to go home to my Mom and Dad, I am truly sorry. Thank you for your time and for considering my words, your Honor.”

Though Bruno has no criminal record and nearly 50 letters testifying to his good character have been submitted to the court, he remains in prison with his family wondering if he will be released on bond (with the family’s home as collateral).

Alise Cua tearfully told Judge Moss last week, “Since he has been arrested, everything has changed for us … We are completely broken.”

Evidence seems to indicate ‘algorithm manipulation’ in the 2020 election