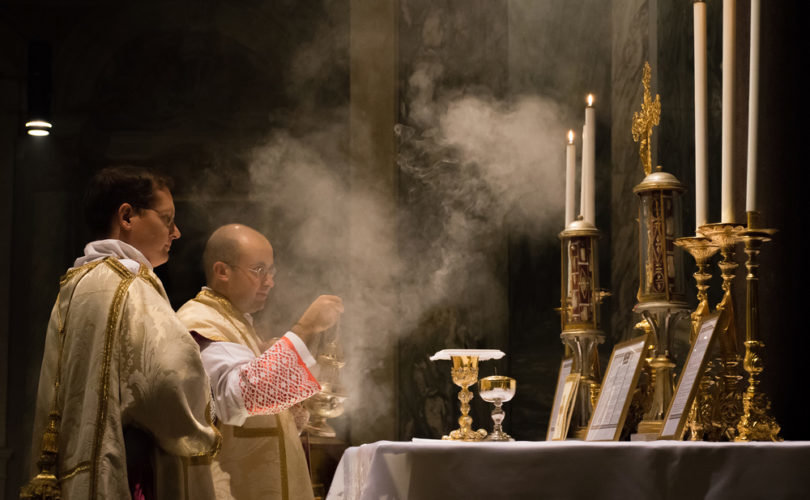 (LifeSiteNews) — A Polish Dominican priest said that Traditionis Custodes is “contrary to the Faith” and that attempts to restrict the Latin Mass “will fail” in an open letter he addressed to Pope Francis.

The letter, originally written in Polish, is dated August 17, but an English version was first released yesterday and can be found below.

It was written by Fr. Wojciech Gołaski, a Dominican priest from Poland who recently joined the priestly Fraternity of Saint Pius X (SSPX) because of Pope Francis’ July 16 decree Traditionis Custodes that severely restricted the celebration of the Traditional Latin Mass throughout the world.

Gołaski wrote to Francis to express his disapproval of the decree and argued that his attempt to suppress the Latin Mass is not founded on Catholic principles or on legitimate papal authority and will therefore ultimately fail.

“This attempt will not succeed. Nothing which is in conflict with Catholicism will be accepted in God’s Church,” he wrote.

Fr. Gołaski joined the Dominican Order 35 years ago and has been a priest for 28 years. He only discovered the Traditional Latin Mass 16 years after his ordination when two lay friends urged him to celebrate it.

Gołaski explained that discovering the Latin Mass was a life-changing experience for him, and that his experience was radically different from some of the widely spread preconceived notions of the old Mass.

“From the beginning it had struck me that this rite is the opposite of the stereotype,” he said.

He then rejected some common accusations against traditionalists and the Traditional Latin Mass often heard from the mouths of fellow Catholics and sometimes from the mouth of Pope Francis himself.

Gołaski was alluding here to the many occasions where Pope Francis has described conservative or traditional Catholics as “rigid.”

The Polish priest soon realized that his devotion to the Traditional Latin Mass was such that he would not miss the Mass of Paul VI.

“Very soon a complete certainty matured within me, that, were I to celebrate Mass only in its traditional form till the end of my days, I would not miss the post-conciliar form in the least,” he said, adding that his discovery of the old Mass was like a relief to him.

“Had someone asked me to express with a single word my feelings about the traditional celebration in the context of the reformed rite, I would have replied ‘relief,’” he wrote.

Gołaski accused Pope Francis of attempting to rob the faithful of what has been declared rightfully theirs by the Church before the publication of Traditionis Custodes.

“From your documents, Holy Father, I learnt that the path I had been walking on for 12 years had ceased to exist,” he lamented.

He argued that the Traditional Mass could never be lawfully suppressed and referred to past papal decrees and documents backing that claim, including pope Benedict’s 2007 Motu Proprio Summorum Pontificum (which he cited) and reminded Pope Francis that “the foundation and source for all these documents remains the Bull of Saint Pius V, Quo primum tempore .”

Gołaski then pointed out that Traditionis Custodes appears to be in direct contradiction with these past documents, including a document promulgated by Francis’ own living predecessor.

“His Holiness Pope Francis says that ‘the liturgical books promulgated by Popes St. Paul VI and St. John Paul II (…) are the only expression of the lex orandi of the Roman Rite.’  The affirmation of the successor thus denies that of his still-living predecessor,” he said in reference to the fact that Pope Benedict, in Summorum Pontificum described the Traditional Mass as the “extraordinary” expression or form of the Roman Rite.

The Dominican priest also noted the irony contained in the name of the document issued by Pope Francis, which calls the diocesan bishops the “guardians” of Tradition. He compared these bishops to prison guards, using an image already contained in an article published by the SSPX in July in reaction to the decree.

Gołaski seemed confident that Pope Francis will not succeed in restricting the old Mass.

“Allow me to express my conviction […] that the operation will fail,” he said.

He opined that the principles on which the document is founded are not Catholic, a sentiment shared by several Catholic essayists in reaction to or anticipation of Traditionis Custodes.

Gołaski argued that as the attempt to suppress the old Mass is not founded on Catholic principles, it is doomed to fail.

Hegelianism
Gołaski described Hegelianism as “an understanding of history” derived from the system of German philosopher Hegel and which defines history as “a good, rational, and inevitable process of continuous changes.” According to Gołaski, Hegelianism assumes that “the Holy Spirit communicates to the next generation something that He has not spoken of to the preceding one, or even that He imparts something that contradicts what He has said before,” which he says is contrary to Church doctrine, as is, according to him, its understanding of Tradition, which “is no longer one message that is continuously studied; it consists rather in receiving again and again new things from the Holy Spirit.”Gołaski argued that “such views are contrary to the faith.”“Holy Scripture, the norm of Catholic faith, provides no grounds for such an understanding of history,” he said.

Gołaski mentioned nominalism next, which he said is a flawed notion of unity. He explained that nominalism seeks to achieve unity through tyrannical decrees applied from the top. “Unity does not result from the withdrawal of faculties, the revocation of consent, and the imposition of limitations,” he said.

The Polish priest also criticized Francis’s concept of the papacy and of his own Pontificate, arguing that papal authority does not provide license to suppress the traditions of the Church.
Can this authority, though, however great it may be, prevent ancient liturgical customs from being an expression of the lex orandi of the Roman Church?” he asked.

Gołaski also pointed out that pope Francis’s approach of Tradition and the church’s liturgy contradicts that of previous Popes, including St Pius V.“You write, Holy Father, that you find support in the decisions of St. Pius V, but he applied criteria which are exactly the opposite of your own,” he said. “According to him, what had existed and lasted for centuries would continue undisturbed; only what was newer was abrogated.”

The last non-Catholic principle listed by Gołaski was what he called “collective responsibility,” that is, punishing the majority for the alleged offenses of a minority.

Gołaski noted that Pope Francis made serious allegations in Traditionis Custodes without ever naming the culprits and applying severe sanctions to the whole flock.

“There are certainly people who misuse knives. Should the production and distribution of knives therefore be banned?” he asked.

“Your decision, Holy Father, is far more grievous than would be the hypothetical absurdity of a universal prohibition against making knives,” he added.

Gołaski also pointed out the irony in Francis’s discourse, when the pontiff stresses the gravity of the extinction of a culture or a species and at the same time ushers in the suppression of the traditional rites of the Catholic Church.

“How can one teach with authority that ‘the disappearance of a culture can be just as serious, or even more serious, than the disappearance of a species of plant or animal’ (Laudato si 145), and then a few years later, with a single act, destine a great part of the Church’s own spiritual and cultural heritage to extinction?” he asked.

The Polish priest concluded his letter by asserting his Faith in the living Tradition of the Church and his desire to “bear witness” to it.

“I see with complete clarity that the treasure of the holy rites of the Church, the ground under the feet of those who practice them, and the mother of their piety, continues to exist,” he said. “It has become equally clear to me that I must bear witness to it.”

He then gave his reasons for joining the SSPX, praising them for their decades long work in the defense of Tradition.

“I have been left no choice now but to turn to those who from the very beginning of the radical changes have defended the Tradition of the Church […] and who continue to pass on the unchangeable deposit of Catholic faith to the faithful,” he said.

He also thanked the SSPX for allowing him to keep his Dominican identity and to give him the opportunity to oppose ideas contrary to the Truth, thereby allowing him to fulfill his vocation more fully.

The SSPX has shown a readiness to accept me, whilst fully respecting my Dominican identity,” he said. “It is providing me not only with a life of service to God and the Church […] but also with an opportunity to oppose those contradictions which are an enemy to Truth, and which have attacked the Church so vigorously.”

The following is the full English translation of Gołaski’s letter to the Pope: