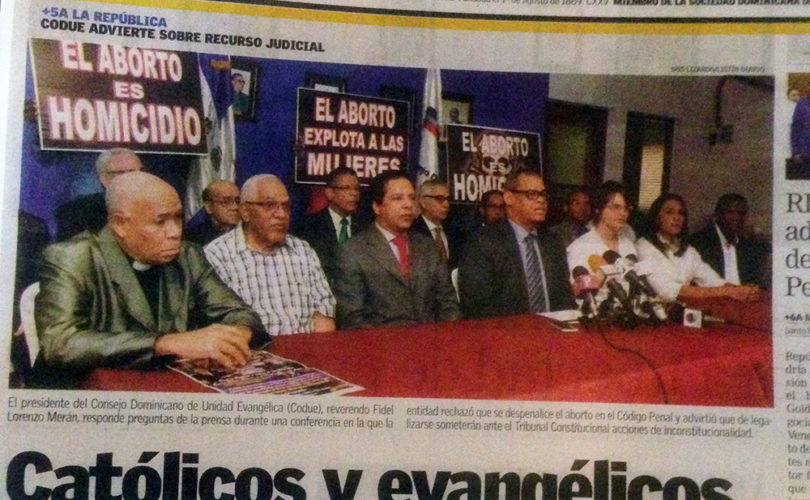 Pro-life forces in the Dominican Republic are not giving up the fight after the House of Deputies approved exceptions to the Penal Code recommended by President Danilo Medina that decriminalized abortion in special cases.

There were 93 deputies in favour of Medina’s exceptions, 69 opposed, and 12 who abstained.

If that happens, Flaquer said the Dominican Council of United Evangelicals, with some 5,000 churches representing a million believers, would challenge the changes to the country’s constitutional tribunal. “It is clearly a violation of the spirit of Section 37 [of the constitution], Flaquer said. This recognizes the sanctity of life from conception to natural death. He was sure the Catholic Church, which has opposed decriminalization as well, will join the Evangelicals in their legal challenge.

As well, the Evangelical leadership has made it clear it will oppose the re-election of deputies who supported Medina’s recommendations. “We will be very, very busy campaigning in 2016,” Flaquer said. “We wonder why he has done something that will have such political cost.”

But for now there is disappointment in the Christian camp. Both the Evangelicals and Catholics, who claim titular allegiance of 95 percent of the DR’s 10.6 million people, were caught totally off guard early this month when President Medina vetoed an ambitious revision of the Penal Code which had been in the works for more than a year, and which significantly toughened the laws against abortion.

But once he vetoed the proposed code, Congress would either have to agree to his recommendations to decriminalize abortion in special cases, or muster a two thirds majority in both houses to override his veto.

“Our opponents had an easier time of it from the start,” admitted Flaquer. “To ratify the president’s changes only needed a simple majority. To override them we needed two-thirds.” Medina’s Dominican Revolutionary Party and its left-wing allies already commanded a majority in the House of Deputies. “Though some in his party did not support these changes,” said Flaquer, “the president has been working very hard to persuade them.” Because the constitution assigns the presidency the power to fill many lucrative government posts, Medina could be very persuasive.

While Evangelicals have been united against decriminalization, the Catholic Church, which helped elect Medina, and believed him until this month to be a staunch pro-lifer, has been ambivalent. Catholic laity have rallied in front of Congress several times, led by priests and a bishop. But several prominent priests have appeared on TV talk shows supporting Medina.

When the Catholic Church’s high profile liaison with the president, Father Manuel Ruiz de la Rosa, suddenly resigned his post over Medina’s actions, The Dominican Republic’s Bishops Conference wasted no time cutting the rug out from under his feet. His reasons were “personal” and “did not correspond… to the position of the Church,” their formal statement asserted. They promised Medina’s government their “cooperation and contribution in social works, especially in the areas of education, health, human development and charity.”

Fr. De la Rosa also claimed that Medina had wanted the abortion revisions because he knew they were unconstitutional. This would force a reopening of the constitution which he wanted because it prevents him from holding office for two consecutive terms.

But in justifying his veto Medina had told the Chamber of Deputies the legislation Penal Code revision did not recognize the “fundamental rights” of pregnant women to life, health, human dignity and physical and moral integrity.

Supporters of Medina argue that the Dominican Republic’s laws against abortions endanger women by forcing them to secure more than 90,000 illegal abortions annually.

Christian leaders have insisted that no doctors and nurses were ever prosecuted for performing abortions to save the life of mothers. As well, they argue that Medina’s exceptions for a few “special cases,” are actually designed to open the door to abortion on demand. Would-be abortion doctors will be happy, they warned, to agree that every woman who wants an abortion is at risk, or that her unborn baby is deformed.