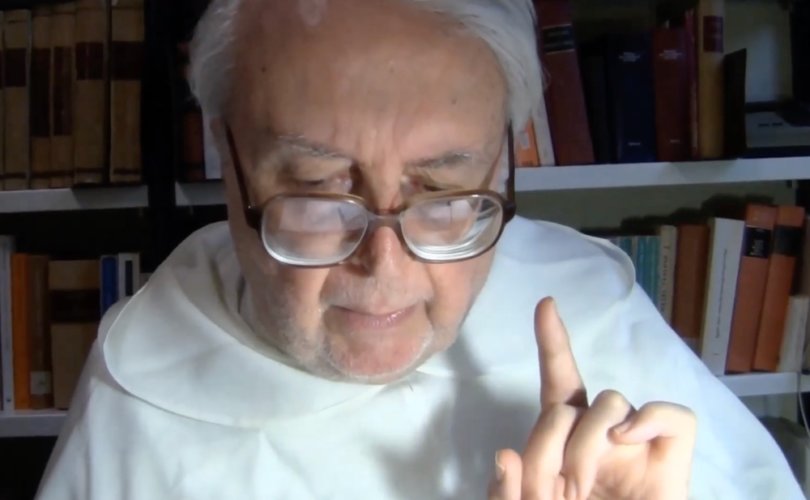 ROME, February 8, 2020 (LifeSiteNews) ― A respected Italian theologian has signaled that Pope Francis is failing in his duty to protect the doctrine of the Catholic faith

In a January interview with Italian Catholic online newspaper La Fede Quotidiano, Fr. Giovanni Cavalcoli, O.P. said that Benedict XVI could be an excellent theological resource for Francis, but the pontiff doesn’t seem to consult him.

“My impression is that Francis doesn’t listen much to Benedict who, in my estimation, had undertaken a line of reform more balanced than that of Francis, more in accordance with … the interpretation that sees the doctrine of the [Second Vatican] Council in continuity, even if more advanced, with the preceding Magisterium,” Cavalcoli stated.

“It seems to me that instead Francis indulges in an interpretation that concedes too much to the progressives […] which is same as saying that he is conceding too much to the Protestants, to the Marxists and to freemasonry, while struggling to dialogue with the traditionalists and followers of Archbishop Lefebvre [i.e. the Society of St. Pius X], something which Benedict managed to do.”

The prolific author and professor, 78, told his interviewer that Benedict was a much better defender of the Catholic faith than Francis is.

“As for the safekeeping of sound doctrine, Benedict was certainly more zealous and diligent than Francis, who is too absorbed by his need for contact with the masses,” Cavalcoli said.

The Dominican theologian contrasted the German pontiff’s approach to regimes hostile towards Christianity to that of the Argentinian.

“In terms of the relationship with the Islamic world and the communists, while Benedict was more concerned with doctrinal clarity, urging Catholics to patience and to bear persecution, Francis, in order to obtain peaceful co-existence, seems to compromise too much with the enemies of Christianity,” Cavalcoli said.

The Catholic Church is in a time of unprecedented crisis, he added, saying that the “Church is living in a moment of serious difficulty and doctrinal and moral decadence, under the semblance of a false modernity, which it has never experienced in all her history.”

“As has been diagnosed for 40 years now, beginning with St. Paul VI, while the Council offered hope of theological progress, moral and spiritual, there was an unexpected massive return of modernism … a modernism worse and more dangerous than that of St. Pius X’s day, as [Jacques] Maritain realized in 1966.”

Cavalcoli said that while Francis has talked of the New Evangelization “starting processes” instead of “occupying spaces”, in reality modernist theologians are occupying “all the spaces, suffocating the freedom of the few normal Catholics remaining, without starting any true reform, but rolling back theology to the heresies before the Councils of Nicaea [325 AD] and Calcedon [451 AD] and philosophy to the pre-Socratic naturalists and myths of the Amazon.”

The Dominican theologian sees the Holy Spirit more at work in the laity than in the clergy today, but says that Francis is the “guide” of the Church, and he must be supported and saved from his “false friends and flatterers.”

“I see the acuity of diagnosis, energy and spiritual freedom, wisdom, the sensus Ecclesiae, presence and parresia of the Holy Spirit more in the laity than in the shepherds,” Cavalcoli told La Fede Quotidiano.

“Pope Francis is like a helmsman on the barque of St. Peter in a mighty tempest,” he continued.

“He struggles to hold the rudder. However, he is the guide. We must stay near him, accept him, support him, pray for him, help him, advise him, free him from false friends and flatterers, call him back to his duties, [and] welcome everything that he does well.”

This is not the first time an influential cleric has voiced concern about the pontiff’s “false friends and flatterers.” Cardinal Gerhard Müller, former Prefect of the Congregation for the Doctrine of the Faith, told EWTN’s Raymond Arroyo in a 2018 interview and in a statement to LifeSiteNews in 2019 that Francis is overly influenced by such people.