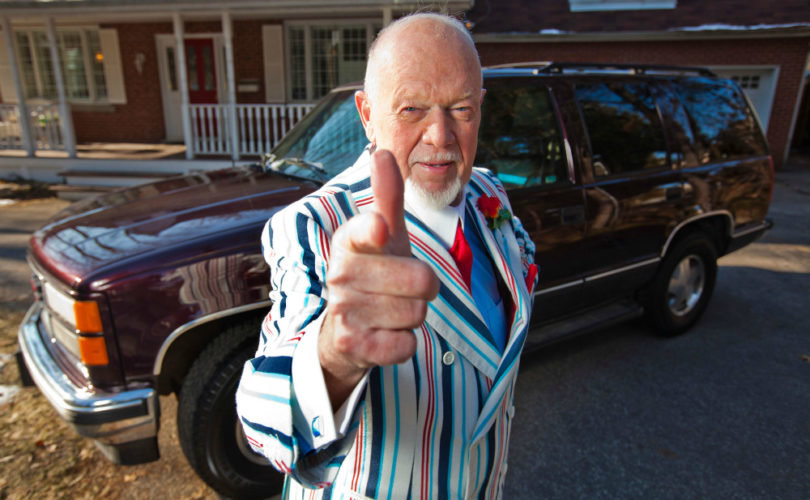 November 26, 2015 (LifeSiteNews) – Don Cherry, the flamboyant sports broadcaster known for his bizarre sartorial style, love of roughhouse hockey and blunt putdowns, recently tweeted his disgust at the Seth Rogen movie that opened November 20, which he saw as evidence that “It’s open season on Christianity.”

The 81-year-old ex-NHL hockey player, coach and star of Coaches Corner for over three decades, is a devout Anglican.

According to a 2013 profile in the Anglican Journal, Cherry reveres the language of his church’s original Book of Common Prayer as “almost Shakespearian,” can recite its Confession by heart, and tells people in public life, “Don’t be afraid to say you are Christian. Be proud of it.”

As for Rogen’s “The Night Before,” it is, by all accounts, a modern buddy movie, replete with the non-stop profanity, sex, drugs and alcohol references, ribald scenes and flashes of nudity requisite for that genre.

But what drew Cherry’s ire was, he observed, a darker dimension.

In a tweetalogue deriding the movie, Cherry noted that: “…the actor vomited in the aisle of the church. Great fun.”

“It showed Jesus crucified on the cross with nails driven into his hands and feet, obviously dead. The actor said something like ‘hey who’s the guy hanging there?’ Really clever.”

8) uproar. Like I said earlier, in this day and age, Christianity is open season but we will survive.

“You see you must realize that this day and age you can ridicule say anything you want as long as it’s about Christians or Christianity,” tweeted Cherry.

“But woe betide… the person if he makes fun or ridicules any other religion. Editorials to the papers, tv news, radio, the left wingers would be in an… uproar.”

“Grapes,” a.k.a. Cherry, did end on an upbeat note: “Like I said earlier, in this day and age, Christianity is open season but we will survive.”

Cherry is well known for controversial comments, one of the more recent of which occurred in 2013, after a Chicago Blackhawks player apparently made a sexist remark to a woman reporter during a post-game interview in the mens’ locker room. “I don’t believe women should be in the male dressing room,” Cherry said.