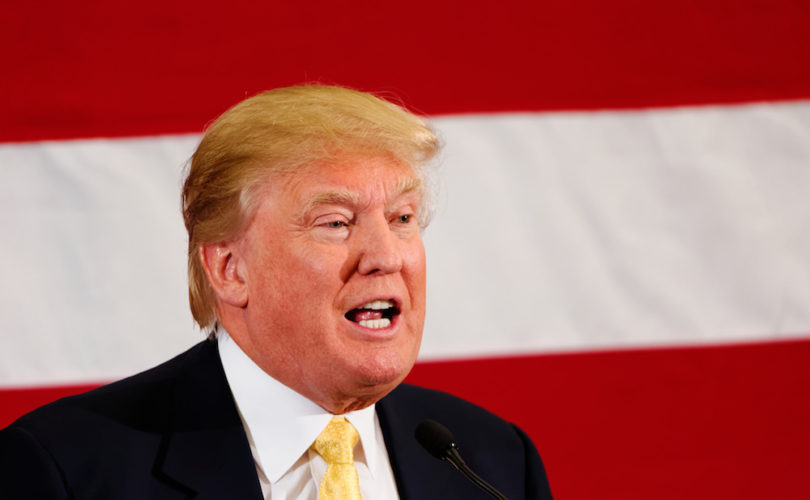 WASHINGTON, D.C., March 31, 2016 (LifeSiteNews) – Donald Trump would “absolutely” support overturning the 1973 Roe v. Wade decision that legalized abortion nationwide – because he believes states should settle the issue for themselves.

However, a Trump campaign spokeswoman appeared to get into an extended bout of word-parsing over whether Trump would “call for” or merely “support” a ban on most abortions.

Katrina Pierson, Mr. Trump's spokeswoman, appeared on CNN's “New Day” program this morning to face fallout from Trump's remarks on Wednesday that women who have had an abortion should incur “some form of punishment.”

Pierson began by correcting host Alisyn Camerota's statement that the candidate backed a ban on abortion.

“He never called for a ban on abortion,” Pierson said. “This was a discussion with Chris Matthews over a hypothetical ban.”

That led Camerota to ask, “Does he think abortion should be banned?”

“”He does not support abortion,” Pierson responded.

“No, does he think that Roe v. Wade should be overturned, and abortion should be illegal?” Camerota pressed.

“Absolutely, because this is a states issue,” Pierson said.“These are states issues, not a federal overreach making decisions for everybody in the whole country.”

That comment gave the most detailed view of Mr. Trump's view on abortion. While he has long said he opposes abortion except for the cases of rape, incest, or to save the life of the mother, he has said the issue of abortion is not one he spent a lot of time thinking about before entering the presidential election.

He has criticized Roe v. Wade, telling CBN's David Brody the landmark case was “wrongly decided,” and he has promised to appoint only pro-life judges to the Supreme Court. But he has largely kept his views of the decision under wraps.

However, legal experts say if Roe v. Wade were overturned, abortion in the United States would not end. The decision would merely revert to the states, where power over the subject resided before the Supreme Court endowed abortion with the status of a constitutional right.

“If Roe was overturned today, abortion would be legal in at least 42-43 states tomorrow, and likely all 50 states,” wrote Clarke Forsythe, senior counselor and acting president of Americans United for Life, in 2010. “Nearly all of the state abortion prohibitions have been either repealed or are blocked by state versions of Roe adopted by state courts. The issue is entirely academic.”

Many of those states would chose to continue abortion in one form or another.

Following a Roe reversal, “The legislatures of the states would have to enact new abortion laws – and these would almost certainly continue the uniform state policy before Roe that abortion laws targeted abortionists and treated women as the second victim of abortion.”

After the revelation that the Trump campaign believes the case should be overturned, Pierson had an extended dispute over whether Trump supported such bans.

The idea of banning abortion originated in a hypothetical situation posed by Chris Matthews, she said.

“He asked him, 'Would you support it?' He said yes, but he did not call for a ban,” Pierson said.