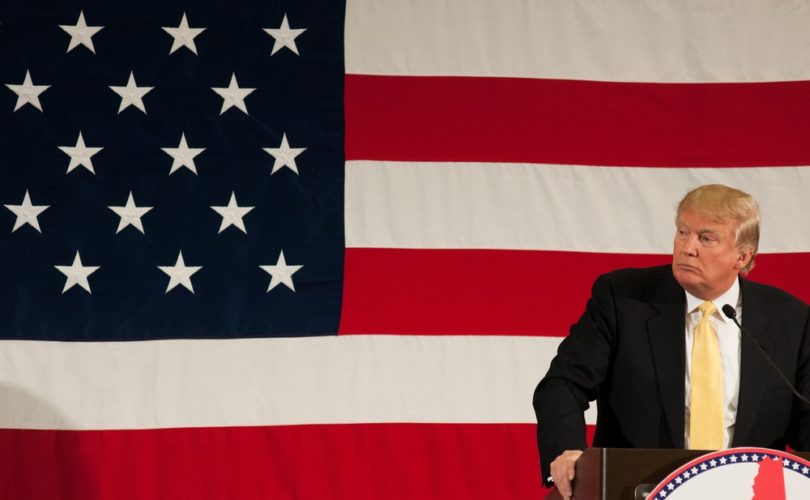 On the record, Trump opposes the inclusion of same-sex couples in the state's definition of marriage, but in 2005, on his “Trump University” blog, he championed the homosexual “marriage” of Elton John and David Furnish.

Appealing to a conservative base, Trump has said he is against redefining marriage, but he also believes we should “move on from the gay marriage battle,” implying acceptance of the Supreme Court's attempt to redefine the institution.

Trump has said he disagreed with the Supreme Court's Obergefell v. Hodges ruling, but he did not support a constitutional amendment allowing states to define marriage. Later, he said he would “consider” appointing justices who would overturn the ruling.

He has said he would appoint conservative justices, yet he suggested that his pro-abortion sister would make a “phenomenal” Supreme Court judge.

Trump wrote in 2005 that the “marriage” of Elton John and his homosexual partner David Furnish was something “to celebrate[.] … It's a marriage that's going to work[.] … I'm very happy for them.”

Dr. Jennifer Roback Morse of the Ruth Institute told LifeSiteNews, “Donald Trump is not a deep thinker. He is, however, shrewd. He is appealing to a particular group of voters.”

“Let's look at the scorecard and see if we can discern his calculation,” Morse said. “He celebrates a friend's celebrity gay 'wedding.' He brags about serial adultery. He has been married three times. He praises Planned Parenthood. Now he tells his followers that he is against gay marriage and will appoint Supreme Court justices who will overturn it.”

“I think his message is, with a not so subtle stage wink, 'You can count on me to go after the people you don't like, and to never challenge any of your own sexual practices,'” Morse said.

Addressing the curious support evangelicals are giving Trump, Morse said, “He is the ideal candidate for the post-Christian voter. Trump is an alpha male who wants what he wants sexually and will not threaten anyone else's right to do whatever they can get away with.”