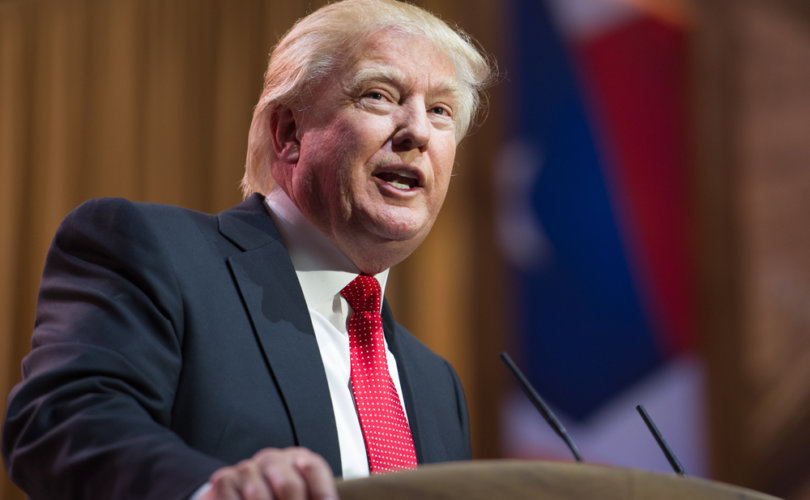 WASHINGTON, D.C., September 16, 2016 (LifeSiteNews) – Donald Trump has pledged to end taxpayer funding of abortion in the United States and to defund the nation’s leading abortion provider.

In a new, personally signed letter, Mr. Trump attacked “Hillary Clinton’s unwavering commitment to advancing taxpayer-funded abortion on-demand,” which “stands in stark contrast to the commitments I’ve made to advance the rights of unborn children and their mothers when elected president.”

The letter then says the Republican is committed to (in his words):

The Hyde Amendment, signed into law in 1977 by Democratic President Jimmy Carter, bars federal funding for most abortions, with the exception of rape, incest, or to save the life of the mother. It is credited with saving a million babies.

Hillary Clinton has vowed to repeal both the Hyde Amendment and its counterpart, which protects U.S. taxpayers from funding abortion-on-demand overseas – a politically unpopular decision pro-life strategists see as an electoral weakness. Polls show the public overwhelming opposed to using tax funds for abortion: 62 percent of Americans, including 45 percent of people who describe themselves as “pro-choice,” opposed the notion in a KofC/Marist poll taken in July.

The letter also highlights Clinton’s most extreme statements in favor of abortion, such as saying that “religious beliefs” that condemn abortion “have to be changed” and her belief that “the unborn person doesn’t have constitutional rights.”

Mr. Trump’s apparently new commitment to maintaining the Hyde Act, and reiterating three past pro-life promises, turned a one-time critic into a conductor on the Trump Train.

“Not only has Mr. Trump doubled down on his three existing commitments to the pro-life movement, he has gone a step further in pledging to protect the Hyde Amendment and the conscience rights of millions of pro-life taxpayers. For a candidate to make additional commitments during a general election is almost unheard of,” said Marjorie Dannenfelser, the president of the Susan B. Anthony List, who will play a leading role in attracting pro-life voters to vote for the candidate on November 8.

The action marks a stark change for Dannenfelser, one of 10 pro-life women who signed a letter in January asking GOP primary voters to “support anyone but Donald Trump.” Since then the billionaire political outsider has repeatedly positioned himself as friendly toward the pro-life cause, embraced a wider vista of its policies, and named several of its stalwarts to his campaign – led by vice presidential nominee Mike Pence.

“After examining Trump's position on life issues and his assurances that he will appoint conservative, pro-life justices to the U.S. Supreme Court, I am convinced that Trump offers our best hope of pushing back the Culture of Death in America,” said Newman. “We know all too well what we will get with Hillary Clinton, and that is more abortion, more tax funding of abortion, and favors for her campaign contributors at Planned Parenthood. A Clinton presidency will result in more dead babies, and this we cannot allow.”

“The contrast could not be clearer between the two tickets,” Dannenfelser agreed.

That welcome news comes as Clinton has plummeted in the polls after her campaign released a conflicting series of statements about her health. A new analysis from Politico shows Donald Trump rising in key battleground states and on a path to win the 270 electoral votes needed to secure the presidency.

“I am proud to serve as national chairwoman for Donald Trump’s Pro-Life Coalition,” Dannenfelser said on Friday.