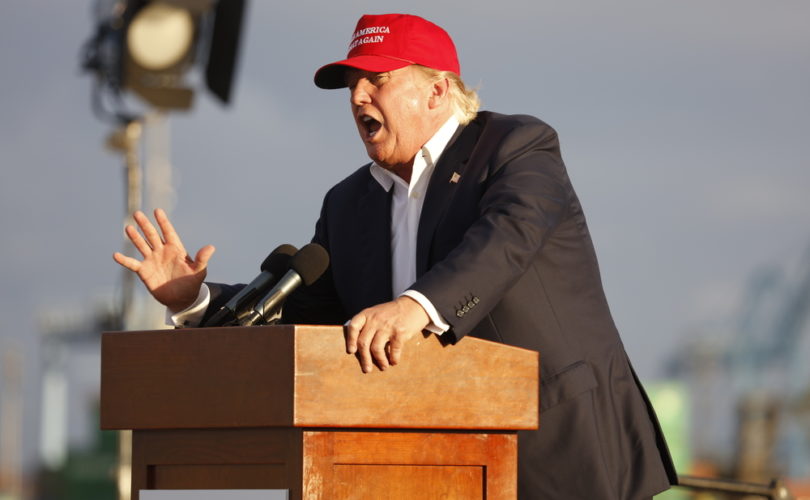 Editor's note: Please see our follow-up article which notes that the Trump Foundation grant was given as part of Trump's reality show rather than on his own personal initiative.

Kevin Jennings founded GLSEN (originally the Gay and Lesbian School Teachers Network) in 1990. He and other homosexual teachers formed Gay-Straight Alliances (GSAs) nationwide and drew up curricula that began shaping children's values in accordance with the LGBT perspective from the age of five.

Kindergarten should be the “saturation period” for LGBT views

GLSEN has been upfront about its goals and desire for mainstream respectability. In 1997, Jennings said, “I can envision a day when straight people say, 'So what if you’re promoting homosexuality?'”

GLSEN recommends children face “saturation” in its viewpoint beginning in kindergarten. GLSEN activist Jaki Williams taught a workshop on “Inclusive Kindergartens” at a 1997 regional conference. “Children in the kindergarten age are ‘developing their superego’…That’s when the saturation process needs to begin,” Williams, a New York teacher, said.

A kindergarten gym teacher described her preferred method to a 1999 GLSEN conference in Atlanta. According to an eyewitness, Geraldine Burke asked girls in her Connecticut class, “Do you ever kiss your sister to show her that you love her?” She reportedly correlated that with same-sex physical passion, adding, “Some people will tell you that you shouldn’t love some people [but] … your hearts tells you who to love.”

GLSEN's materials guide teachers in undermining the children's (and their parents') moral objections to homosexuality and leading children into accepting alternative ideas of families.

A publication written in consultation with UNESCO asks teachers to “decodify and rename” traditional family structures, a process to “include as of kindergarten (games and songs).”

In another “toolkit” entitled “Ready, Set, Respect!” GLSEN advises “elementary school educators” to “challenge the stereotypes that may impair healthy development.” Among other things, they should “make sure the analogies you use when teaching don’t rely on hetero-normative or gender-normative images or viewpoints.” (Emphasis in original.) Teachers should, for instance, casually use word problems including two dads or two moms rather than a mother a father.

A Massachusetts curriculum instructs teachers, “When discussing this issue, help students to move past preoccupations with the ‘rightness’ or ‘wrongness’ of same-sex coupling or homosexuality in general. Place the debate over marriage within the context of human rights, thereby expanding the dialogue beyond the realm of morality.”

It asks teachers to distribute a story to students that says, “Being gay is just one more kind of love. And love is the best kind of happiness.”

“And I'm happy too!” the child concludes.

As the children mature, so does GLSEN's subject matter.

In Queer 13: Lesbian and Gay Writers Recall Seventh Grade, author Justin Chin describes how, as the titular 13-year-old child, he “really did enjoy” the “near-rapes” he experienced from gay adult males.

In Passages of Pride, Kurt Chandler writes about a 15-year-old who is subjected to statutory rape by a “troll” who was “almost twice Dan's age.” Nonetheless, Chandler wrote, “everything was consensual.”

That dovetails with Jennings' statement that he was “inspired” by Harry Hay, a socialist who publicly stated that homosexual statutory rape is “precisely what 13-, 14-, and 15-year-old kids need more than anything else in the world. And they would be welcoming this, and welcoming the opportunity for young gay kids to have the kind of experience that they would need.”

That outlook shaped Jennings' interactions with his students. He wrote in his autobiography that in 1988, a 15-year-old boy named “Robertson” told him of having repeated sexual intercourse with an older man in a bus stop restroom. His response was only to say, “I hope you knew to use a condom.”

Surprisingly, turning a blind eye to pedophilia – or worse – is not the incident that most sullied GLSEN's reputation.

“Fistgate” – and teaming with Planned Parenthood

GLSEN came under the greatest scrutiny in 2000 when an undercover recording exposed the sexual advice it gives minors. GLSEN's tenth annual conference, held at Tufts University on March 25, was recorded by then-MassResistance Executive Director Scott Whiteman.

It isn't usually about inflicting pain to its recipient, “not that we're putting that down,” Abels said.

Concerned parents will find these two grants alarming. However, it bears noting that Trump has not directed a significant percentage of his tax-exempt philanthropy to political causes, as other political figures have. The majority of his grants are to causes such as the American Cancer Society, American Heart Association, American Red Cross, American Diabetes Association, multiple grants to Ronald McDonald House of New York, and numerous grants to veterans causes.

He also donated in the same year $100,000 to each of Operation Smile and Children's Hospital. As well, he donated to the American Conservative Union.

However, the political donations he made have not shown a clear pattern, even on this issue. He gave three-times as much money to an organization that fought against same-sex “marriage” as he did to GLSEN. He has also made numerous grants to conservative political organizations and Christian ministries. $100,000 went to Billy Graham. Jerry Falwell Jr. cited those donations in his laudatory introduction of Trump at Liberty University shortly before he endorsed the business tycoon.

The Donald J. Trump Foundation and campaign did not immediately return LifeSiteNews' request for comment.

Donald Trump wins Nevada caucus, dominating every group of voters except one

Donald Trump to Planned Parenthood: Stop all abortions or I’ll defund you