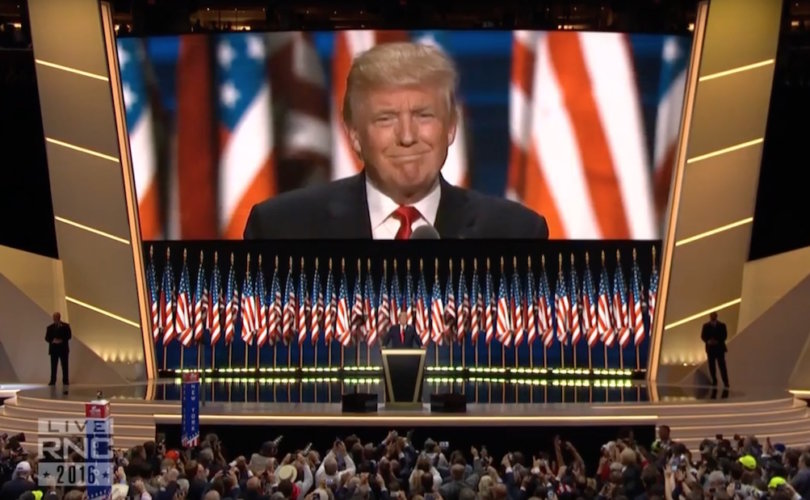 CLEVELAND, July 22, 2016 (LifeSiteNews) – Donald Trump’s acceptance speech at the Republican National Convention last night was the first in 36 years not to mention abortion in any way.

His 75-minute speech concentrated heavily on his campaign themes of trade, immigration, and support for police officers and the military. However, it made no reference to the subject of abortion, the sanctity of life, or protecting the unalienable rights of the unborn.

That makes his address the first time since the GOP adopted its pro-life plank in 1980 that the nominee has not made such a reference.

Four years ago Mitt Romney, who had a long and complicated history of positions on the subject of abortion, promised delegates during his acceptance speech, “As president, I will protect the sanctity of life. I will honor the institution of marriage, and I will guarantee America's first liberty: the freedom of religion.”

In 2008, John McCain made one reference to the “culture of life,” saying, “We believe in a strong defense, work, faith, service, a culture of life, personal responsibility, the rule of law, and judges who dispense justice impartially and don't legislate from the bench.”

George W. Bush mentioned abortion in both of his acceptance speeches to the RNC, as did his father.

In 2000, he specifically promised to sign the partial birth abortion bill then-President Bill Clinton repeatedly vetoed. “I will lead our nation toward a culture that values life — the life of the elderly and the sick, the life of the young, and the life of the unborn,” he said. “I know good people disagree on this issue, but surely we can agree on ways to value life by promoting adoption and parental notification, and when Congress sends me a bill against partial-birth abortion, I will sign it into law.”

Before winning re-election four years later, he said, “Because a caring society will value its weakest members, we must make a place for the unborn child.”

Bob Dole – who won the GOP nomination 20 years ago, 20 years after serving as Gerald Ford’s vice presidential nominee (but not as vice president) – made one perfunctory reference to abortion in his acceptance speech. In 1996, he asked voters, after Clinton-era America had jettisoned “supposedly obsolete values, what have we reaped? What have we created? What do we have?”

“What we have – in the opinions of millions of Americans – is crime and drugs, illegitimacy, abortion, the abdication of duty, and the abandonment of children.”

Senator Dole, who turns 93 today and is now confined to a wheelchair, was in attendance at this year’s GOP convention.

The 41st president, George Herbert Walker Bush, mentioned abortion in both his acceptance speeches, although he ran for president as a “pro-choice” Republican in 1980 and strongly supported international family planning programs in the Nixon administration. He credited Ronald Reagan with helping him change his views on abortion.

Facing Michael Dukakis in 1988, he asked, “Is it right to believe in the sanctity of life and protect the lives of innocent children? My opponent says no – but I say yes. We must change from abortion to adoption. I have an adopted granddaughter. The day of her christening, we wept with joy. I thank God her parents chose life.”

Four years later, he was more reserved. “Some values are timeless,” he said. “I happen to believe very deeply in the worth of each individual human being, born or unborn.”

However, the 1992 Republican Convention in Houston dedicated an entire night of its televised proceedings to values issues, and numerous speakers throughout the convention touched on issues of life and family including primary challenger Pat Buchanan, Vice President Dan Quayle and his wife Marilyn, and 1988 presidential hopeful Pat Robertson.

The most outspoken pro-life presidential candidate in Republican history, President Ronald Reagan, strongly upheld the rights of the unborn in 1984.

“We believe in the sacredness of human life,” he said, at first contrasting the United States with the Soviet Union. Then he turned to abortion. “We celebrate the right of each individual to be recognized as unique, possessed of dignity and the sacred right to life, liberty, and the pursuit of happiness.”

Ironically, it was Reagan who did not address abortion in his 1980 acceptance speech. That year’s Republican National Convention in Detroit became the first in the party’s history to take a strong pro-life stance on abortion, as both parties were internally divided in 1976. That year’s nominee, Gerald Ford, opposed right to life laws and called GOP pro-life resolutions the “devastating” handiwork of “zealots.”

Despite Reagan’s silence at the RNC, he strongly supported the right to life during the 1980 campaign, and before, and spoke about fetal pain and “personhood” throughout his presidency. In his debate against independent presidential candidate John Anderson, he quipped, “I've noticed that everybody that is for abortion has already been born.”

Turning more serious, he said, “I do believe that maybe we could find the answer through medical evidence, if we would determine once and for all, is an unborn child a human being? I happen to believe it is.”

Trump’s silence came despite the fact that this year’s GOP delegates adopted what some call the most pro-life platform in history, calling for a constitutional amendment protecting unborn children from abortion and for the first time advocating the defunding of Planned Parenthood by name.

Social issues in general have gotten less emphasis in Donald Trump’s GOP. Even rock-ribbed values voters, such as “Duck Dynasty” star Willie Robertson and Rep. Marsha Blackburn, did not mention the issue directly.

However, a few Republicans mentioned abortion during the four-day event, which culminated in the nominee’s acceptance last night.

Vice Presidential nominee Mike Pence said voters should support the Republican ticket “for the sake of the sanctity of life,” especially on judicial appointments.

“We are one in our belief that every life is precious, regardless of race or class – including the lives of the unborn children,” said Gov. Mary Fallin of Oklahoma to applause.

“Now, as a party, we don’t agree 100 percent on everything,” she continued. “As Ronald Reagan once said, the person who agrees with you 80 percent of the time is a friend and an ally.”

On Tuesday night, talk show host Laura Ingraham America’s breakdown came in part because people lack respect. “Many don't respect the life of the infant in the womb, or the elderly who languish alone,” she said.

Liberty University President Jerry Falwell Jr. said, “A vote for Trump is a vote to appoint conservative, pro-life justices to the Supreme Court.”

This year's Republican National Convention was also the first to feature a speech from an openly gay man, Paypal co-founder Peter Thiel.

2016 Republican Party platform hailed as most pro-life, pro-family ever