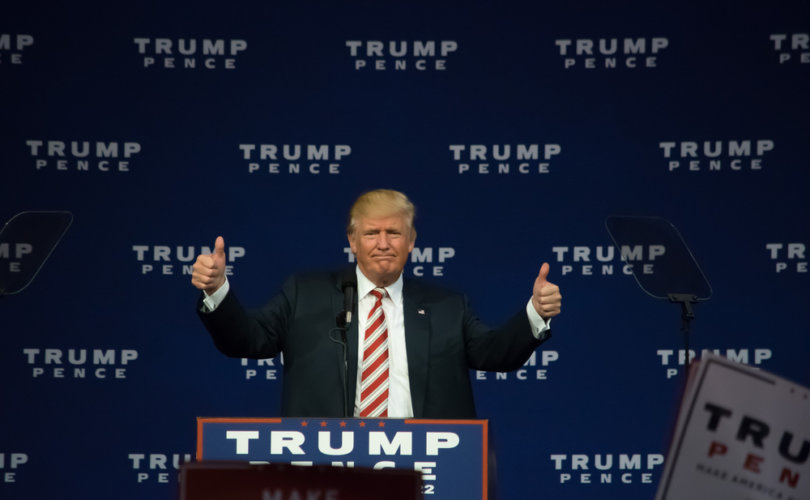 WASHINGTON, D.C., September 29, 2016 (LifeSiteNews) – Donald Trump has assembled a team of pro-life heavyweights to act as his presidential campaign’s brain trust on the issue of life.

Just two weeks ago, the Republican nominee announced that his Pro-Life Coalition would be chaired by Marjorie Dannenfelser, president of the Susan B. Anthony List.

At the same time, he released a letter committing to nominate only pro-life justices to the Supreme Court, sign the Pain Capable Unborn Child Protection Act, defund Planned Parenthood as long as it performs abortion, and making the Hyde Amendment denying federal funds for most abortions permanent.

“National co-chairs of the coalition will communicate Mr. Trump’s pro-life commitments to people in their sphere of influence, speak out in support of the Trump-Pence ticket and, most importantly, recruit state co-chairs for the coalition who will in turn drive the campaign’s pro-life message out to each individual voter,” Dannenfelser said on Thursday. “The policies outlined by Mr. Trump are not only important to pro-life base voters, but they appeal to a majority of Americans who oppose Hillary Clinton’s plan to make taxpayers pay for even late-term abortion-on-demand.”

“Every vote counts,” she said.

It was quite a transition for Dannenfelser, who once encouraged Republican primary voters to “support anyone but Donald Trump.” After getting to know the GOP nominee, she now says she trusts Mr. Trump “immeasurably.”

“It you’re pro-life, even marginally, you have to ask yourself: who do I trust to handle the lives of these people the most?” she told the Telegraph.

The other side of the issue seems to agree. Planned Parenthood has committed at least $18 million to the 2016 election. Just this week, NARAL Pro-Choice America announced a $300,000 digital ad campaign targeting Trump and a handful of Republican senators on the issue of abortion.

Marge Baker, executive vice president of the Soros-funded People for the American Way, said, “Trump is making it exceptionally clear that he would be a horrifically anti-choice president.”