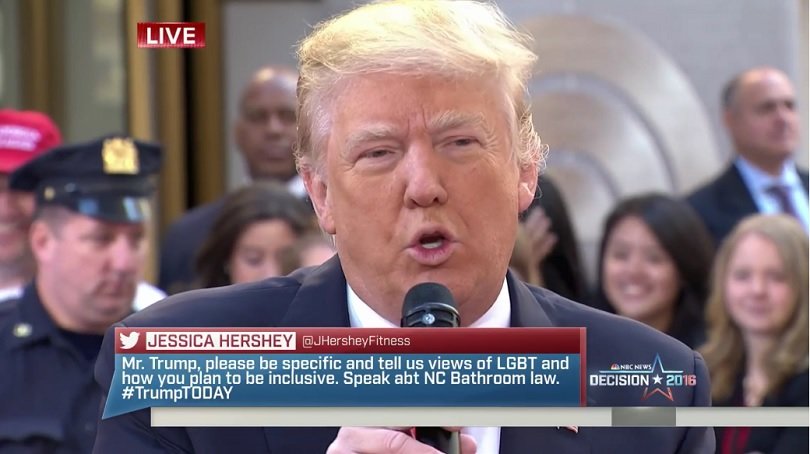 NEW YORK CITY, April 21, 2016 (LifeSiteNews) – North Carolina should not have passed a law to prevent biological males from using the restrooms, showers, and changing facilities of the opposite sex, Republican presidential frontrunner Donald Trump said this morning.

Efforts to create new restrooms specifically for transgender people “would be discriminatory,” he said.

When asked about North Carolina's H.B. 2, enacted by Republican moderate Gov. Pat McCrory, which restricts all such facilities to members of the same biological sex, Trump grimaced.

“Oh, I had a feeling that question was going to come up,” he said.

The state should have decided to “leave it the way it is,” he said.

“People go, they use the bathroom that they feel is appropriate,” Trump continued. “There have been very few complaints the way it is.”

Speaking during a nationally televised town hall meeting on NBC's “Today” show, Mr. Trump cited the economic backlash against North Carolina – more than 160 businesses, including some of the most powerful corporations in the nation – as part of the reason the new law should have been scuttled.

“North Carolina did something that was very strong, and they're paying a big price,” he said, “with all of the businesses that's leaving and with all of the strife – and that's on both sides.”

That response is a stark contrast to his closest rival, Senator Ted Cruz, who called the law “reasonable” during an MSNBC town hall in Buffalo last week. “As the father of daughters, I'm not terribly excited about men being able to go alone into a bathroom with my daughters,” he said.

Common sense: grown men shouldn't be in bathrooms w/ little girls. @realDonaldTrump told us he could be PC, but wow. https://t.co/WB93ATZYy4

The business mogul's answer puts him more in line with Ohio Governor John Kasich, who said he “probably” wouldn't have signed H.B. 2, telling both sides of the controversy to “chill out” and “get over it.”

This morning, Mr. Trump raised the issue of having businesses create new restrooms specifically designated as unisex or for transgender use, before deciding against it on fiscal grounds.

“First of all, I think that would be discriminatory, in a certain way,” he said. Also, “it would be unbelievably expensive for businesses and the country,” as every public accommodation in the nation added a new restroom facility.

Host Matt Lauer asked Trump if Bruce Jenner, who legally changed his name to Caitlyn, would be welcome to use “any bathroom she chooses” if he visits Trump Tower.

“That is correct,” Trump replied.

He did not specifically indicate that he supported laws requiring businesses to allow biological males to use the intimate facilities of the opposite sex, and did not comment on the rest of the viewer's question about what concrete measures he would take to advance LGBT political goals.

Ted Cruz backs NC law: ‘Men should not be going to the bathroom with little girls’