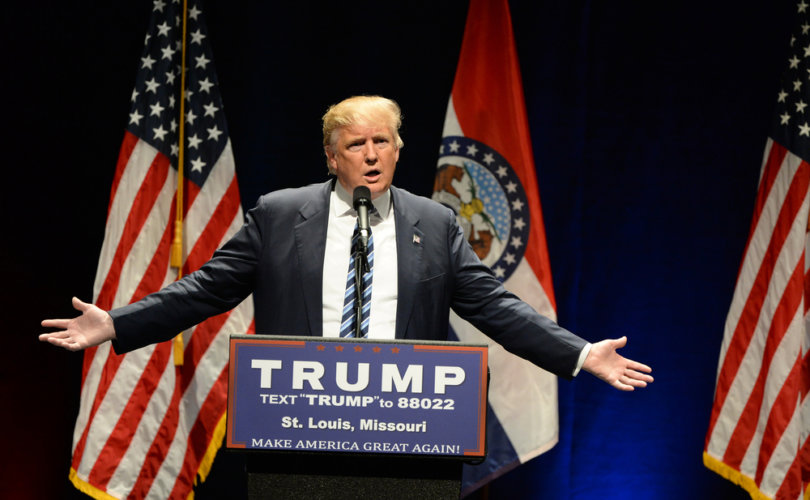 WASHINGTON, D.C., April 4, 2016 (LifeSiteNews) – Donald Trump has again roiled the pro-life movement with statements on abortion that seemed to imply he would not change abortion law, a notion his campaign quickly walked back.

On “Face the Nation” this Sunday, Trump said, “The laws are set now on abortion and that’s the way they're going to remain until they’re changed.”

“I would’ve preferred states’ rights,” leaving each state the right to regulate abortion. But “at this moment, the laws are set. And I think we have to leave it that way.”

Pro-life leaders immediately objected to any impression that a Republican presidential candidate could accept the status quo.

“He has completely contradicted himself,” said Susan B. Anthony List President Marjorie Dannenfelser. “If this is his position, he has just disqualified himself as the GOP nominee.”

The Trump campaign rushed out a statement to defend his remarks as consistent. “Mr. Trump gave an accurate account of the law as it is today and made clear it must stay that way now — until he is president,” the campaign said. “Then he will change the law through his judicial appointments and allow the states to protect the unborn.”

Mr. Trump told Pat Robertson that he would make a pro-life stance a litmus test for his Supreme Court nominees and has asked the conservative Heritage Foundation to compile a shortlist of judges he could name to the High Court, if he is elected.

Although still the frontrunner, his campaign has been on the ropes since he responded to a hypothetical question from MSNBC's Chris Matthews that, if abortion were made illegal, women who have an abortion should face “some form of punishment.”

His campaign quickly released a statement saying Trump would only support punishing the abortionist.

But on Sunday, Mr. Trump said his initial response on MSNBC “was an answer that was given on the basis of an older line from years ago,” made “on a very conservative basis.”

Trump attempted to clarify his remarks during a town hall meeting that Greta Van Susteren conducted in Milwaukee, which aired Sunday evening on Fox News. Post-abortive “women go through a lot,” he said. “They go through a tremendous punishment of themselves.”

“It seems each pronouncement Mr. Trump makes that comes from his gut must be corrected by someone 15 minutes later,” Dannenfelser said.

She noted that Trump had previously said he would sign the Pain Capable Unborn Child Protection Act. He has also said he would defund Planned Parenthood if it continued to perform abortions.

The latest flap and sustained opposition from two of the state's most influential leaders – Gov. Scott Walker and House Speaker Paul Ryan – have set back Trump's hopes of winning the Wisconsin primary, which will be held on Tuesday. Mr. Trump trails Sen. Ted Cruz by six points, according to a CBS News-YouGov poll released on Sunday.

In the face of plunging poll numbers – including a precipitous negative rating among women – some consultants have advised Trump to avoid speaking about abortion.

“Trump is in panic mode after his unwise abortion comments [last] week, which were extremely alienating to women and millennial voters,” said Kristin Tate, a conservative political columnist. “Trump would be wise to shift his focus on the issue that initially made him the GOP front runner and the issue that Republican voters care most about: Immigration.”

But Dannenfelser said candidate Trump must instead learn to articulate his position on the right to life clearly and consistently.

“At some point, the candidate's words must stand on their own,” she said. “What do you believe, Mr. Trump? No one knows.”