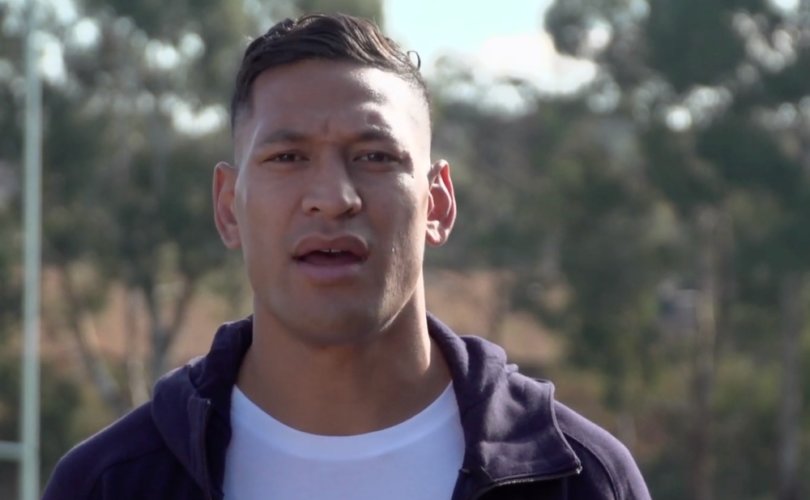 DEAKIN, Australia, June 25, 2019 (LifeSiteNews) ― The crowdfunding website that cancelled a Christian athlete’s appeal has inadvertently done him a favor.

Donations for fired Australian rugby star Israel Folau have more than doubled since GoFundMe took down his page. Now made through the Australian Christian Lobby’s website, pledges had reached $1,564,870 Australian ($1,088,802 US) before this article went to press. Before GoFundMe pulled the plug, donations through their site totalled $760,000 Australian ($530,000 US).

Folau is suing Rugby Australia for his dismissal from the organization, arguing that his former employer discriminated against him for his religious faith. Folau, a member of the Pentecostal tradition, was fired after quoting from St. Paul on Instagram.

Martyn Iles, the Managing Director of the Australian Christian Lobby, explained why they are supporting the rugby player.

“On behalf of the Australian Christian Lobby, I have spoken to Israel Folau to let him know that ACL will be donating $100,000 to his legal defence, because it’s right and it sets an important legal precedent,” Iles wrote.

“I have also offered to host his online appeal for funds here on our website and he has accepted our offer,” he continued.

Folau, a Tongan-Australian, first offended LGBT activists during the run-up to Australia’s 2017 referendum on same-sex “marriage.” Rugby Australia officially supported the campaign for the change in the legal definition of the institution, but player Folau announced on Twitter that he did not.

“I love and respect all people for who they are and their opinions. But personally, I will not support gay marriage,” he wrote.

In April 2018, Folau posted a humorous cartoon illustrating the difference between life as one plans it and life as God plans it. When a commentator asked him what was God’s plan for gay people, Folau replied “HELL … Unless they repent of their sins and turn to God.”

In the ensuing furor, Folau wrote a blog post entitled “I’m a Sinner Too” to explain his Christian beliefs.

This May, Rugby Australia cancelled Folau’s contract weeks after he published a poster on Instagram reading, “Warning: Drunks, Homosexuals, Adulterers, Liars, Fornicators, Thieves, Atheists, Idolators, Hell Awaits You. Repent! Only Jesus Saves.” Beside the image, he added, “Those that are living in Sin will end up in hell unless you repent. Jesus Christ loves you and is giving you time to turn away from your sin and come to him.”

Folau then quoted Paul’s Letter to the Galatians, 5:19–21, writing, “Now the works of the flesh are manifest, which are these, adultery, fornication, uncleanness, lasciviousness, idolatry, witchcraft, hatred, variance, emulations, wrath, strife, seditions, heresies, Envyings, murders, drunkenness, revellings, and such like: of the which I tell you before, as I have also told you in time past, that they which do such things shall not inherit the kingdom of God.”

In the wake of Folau’s dismissal, Australians elected a conservative government that has pledged to work to strengthen religious freedom in the country. However, Folau’s wife Maria, who is also an athlete, a Christian, and a person of color, is coming under fire for having shared a link to her husband’s fundraising page. Most recently, ANZ Bank, a major sponsor for her professional netball team, condemned her in a statement to her employer. However, Maria Folau has not made any statement about the lawsuit.