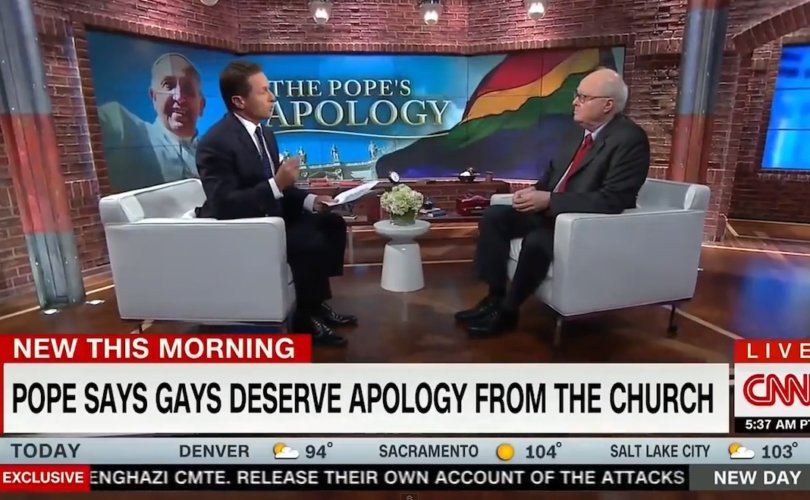 But Donohue stood his ground and said gays are the ones who should apologize.

“Not everybody in the Catholic Church is going along with the leader of the Church” and his call for Christians to apologize to gays, charged Cuomo.

“As a matter of fact, I want an apology from gays,” Donohue fired back. “I’ve been assaulted by gays. I’ve never assaulted a gay person in my entire life.”

Donohue cited a time when lesbians at a parade assaulted him for taking their photo. Later during the interview, Donohue told Cuomo that during his time in the U.S. Air Force, he intervened when gay men were being bullied.

“CNN is factually wrong, and so it today’s New York Times,” Donohue continued. “Because they said that the pope said that the Church said that we have to apologize. He said Christians. He said — this is a direct quote on the plane with Cindy Wooden. He said, ‘The Church is holy, and we are sinners.’ Christians are sinners. Now, if a Catholic or Protestant or Jew or Muslim has offended a gay person or anybody, of course they should apologize.”

The CNN anchor then suggested he and Donohue “discuss why you are resistant to it.”

Cuomo continued attacking Donohue after Donohue explained some of the work he does on behalf of poor communities.

“You don’t wanna be educated,” Cuomo said to Donohue’s inquiry about the “Q” in “LGBTQ.” “You wanna judge. And the pope is telling you don’t judge.”

Watch the the New Day clip:

Many anti-Catholic Catholics and supporters of the LGBT agenda have rejoiced at the pope’s recent remarks on homosexuality. The executive director of the dissident group DignityUSA hailed Pope Francis’ remarks as potentially “a very important step in healing the relationship between the Catholic Church and LGBTQ people,” and called for a change to the Catechism of the Catholic Church.

And the Human Rights Campaign, one of America’s most influential gay rights lobbying groups, said Pope Francis’ words “are a welcome step.” The group also praised St. Petersburg Bishop Robert Lynch and Chicago Archbishop Blase Cupich for “their recent statements of support and inclusion” in the wake of the Orlando terrorist attack on a gay nightclub.