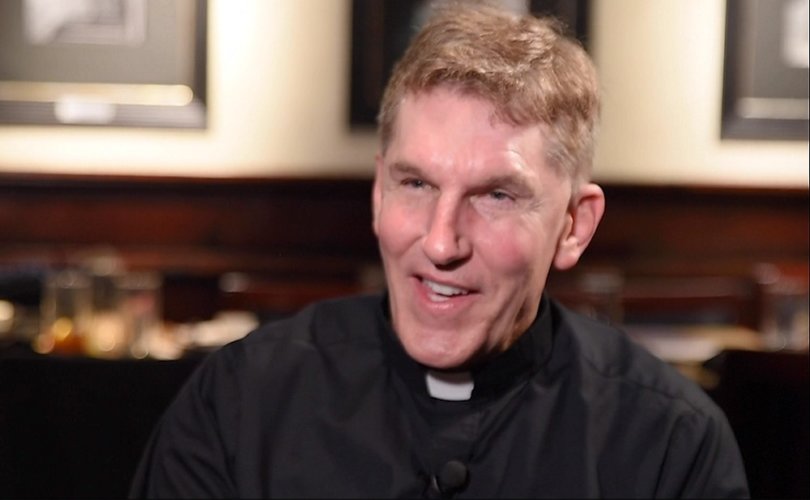 June 7, 2021 (LifeSiteNews) — Within just two weeks of launching a fundraising campaign for Fr. James Altman, who is known for fearlessly attacking Catholicism lite, LifeSite’s LifeFunder platform has raised more than $332,000 thanks to the generous contributions of almost 4,000 donors, all in support of Altman’s work.

Altman’s critique of the Catholic hierarchy in America, including the decision of countless bishops to shut their church doors and withhold Mass and the sacraments from the faithful in a time of great need, has earned him the ire of the secular media and many prelates.

The Wisconsin pastor has faced much backlash from the political Left since first exploding into the public sphere in the fall of 2020 with his now-famous video speech “You cannot be Catholic and a Democrat.” At its release, the video went viral, racking up over 1 million views and bringing Altman from simply ministering to the modest parish of St. James the Less in La Crosse, Wisconsin, to the attention of the world.

Following the release of his speech, Altman quickly faced attacks from enemies both inside the Church and out, with his office receiving numerous messages in opposition to his bold stance for the truth: “[We] got the most vile, despicable phone calls, letters. I got some terrible, really foul messages,” Altman told LifeSite’s editor-in-chief John-Henry Westen in September.

The latest attempt to silence Altman has come from his own Bishop William P. Callahan of the diocese of La Crosse, Wisconsin. Callahan asked for Altman to prematurely resign his post at the parish of St. James the Less at the end of May, after months of threatening “canonical penalties.” Previously, he had asked Altman to halt live-streaming his Masses following his scorching of the Democratic Party platform.

With confidence in his convictions, however, Altman refused to abandon his parish by leaving before the end of his tenure, leading Callahan to begin the canonical process of his removal. This process brings with it many expenses, not least of which will be attorney fees, prompting LifeSiteNews to run a fundraising campaign through its LifeFunder platform.

Within the first 24 hours, the campaign had already exceeded its target by almost double the $100,000 goal. Now, just under two weeks later, that sum has broken $300,000 and continues to grow with 25 days left to donate.

Though this sum likely exceeds the costs associated with Altman’s legal battle, the priest has pledged to donate some of the extra money to charities of his choosing, as well as to be able to “feed his sheep” by continuing to broadcast during this time of uncertainty.

Altman spoke to LifeSiteNews correspondent Jim Hale just days after he was asked to resign, and after hundreds of thousands of dollars had already poured in from generous supporters.

He expressed a deep gratitude for the “extraordinary” support from LifeSite readers, describing their generosity as “a testament to me of the witness of touching people around the world with the depth of our faith, with the truths of our faith.”

In addition to laymen around the world, Altman’s unwavering fidelity to the truth gained him the open support of Bishop Joseph Strickland of Tyler, Texas.

Indeed, it is precisely Altman’s firm preaching that has caused him so much trouble with Church authorities. In a Pentecost Sunday homily, Altman told his parish that “they want my head on a platter. They want my head now for speaking the truth. I apparently have created enemies in the hierarchy.”

Instead, Altman has held firm to the truths he has consistently preached, and which have won him the admiration of countless faithful Catholics the world over. For this, Bishop Callahan has accused Altman of being “divisive and ineffective.”

“Jesus warned the Apostles and us that if the world hated him, it would hate us, just because we are trying to be faithful. In other words, the world will be divided by the truth,” he continued. “There will be we who are faithful, who follow the truth, divided from those who are not faithful and who oppose the truth.”