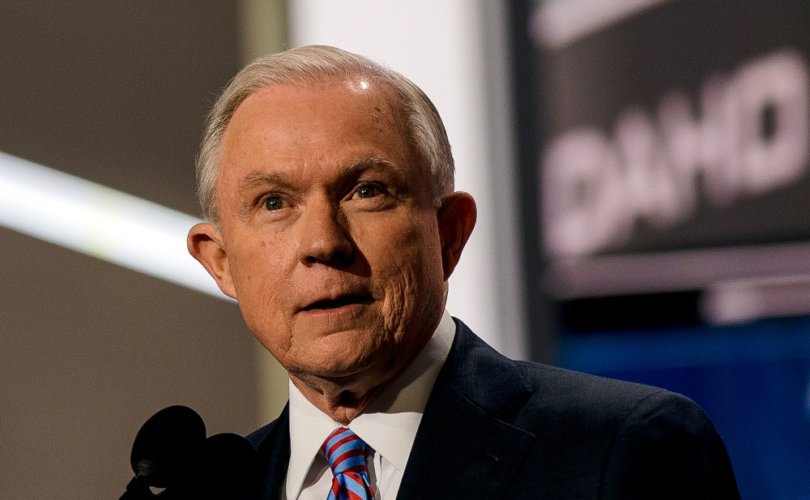 Sessions was addressing Turning Point USA’s annual High School Leadership Summit, hosted at George Washington University. The Daily Signal reports that the attorney general’s remarks focused on encouraging the crowd of roughly 700 students to prepare themselves for the challenge not only to conservative ideals they can expect upon entering college, but to their right to express them.

“[The left] want to stop you from speaking, they want you to quit, they want you to abandon your values,” Sessions said. America’s Founding Fathers anticipated “that those in power would look for ways to contain criticism,” which is why they “took care to enshrine the robust protections of the First Amendment in our Constitution.”

Yet today many colleges and universities are working to circumvent those protections, he continued, detailing how his Justice Department was responding to such efforts, such as a suit against the University of California-Berkeley.

“Under the school’s policy, administrators appeared to have almost complete discretion over the times, places, and conditions of hosting campus guest speakers. That discretion allowed them to apply different rules to different people in an arbitrary and capricious way,” Sessions explained. “A group of students argue that that’s precisely what administrators did. They allege that by placing unrealistically burdensome requirements on conservative speakers—but not on other speakers—the school effectively discriminated against them and made it impossible for them to speak.”

“Under President Trump’s strong leadership, this Department of Justice is doing its part to protect our republic by protecting this right,” the attorney general promised. “We are going to court to protect students across America, and we’re winning.”

At the event, the Daily Signal’s Rob Bluey took the opportunity to interview Sessions, as well.

Sessions lamented the state of speech in academia, specifically highlighting “university presidents [who] would support groups who go in deliberately to intimidate, threaten, and block a person’s right to freely discuss an issue.” He also explained that universities’ key role in shaping the values of young people meant that states have a role to play in ensuring they remain fair.

“So, I do think that state legislators and administrators have a right to be concerned if a university is only having one side of the issue promoted,” Sessions said. “And in fact, what it can often in reality amount to is that the state is funding a group of people to advocate for a certain political position, which isn’t appropriate.”

The Founders “believed that out of the cauldron of debate that truth emerged,” he noted.

Bluey cited an April survey by the American Council on Education, which found that 15% of university presidents feel it’s “sometimes acceptable” to shout down speakers or otherwise prevent them from speaking.

Last year, a group of pro-speech American and Canadian professors compiled data concluding that liberals were far more likely than conservatives to attempt to disinvite and disrupt controversial speakers. Pro-life students have long been targets of harassment and intimidation on college campuses, and the University of Minnesota is currently considering whether to expel students who “misgender” anyone on campus.

“There is no more important time to be in the trenches than when on defense—when the enemy is charging at you,” Sessions concluded in his remarks. “It is especially important when you’re defending a position that may be unfashionable to maintain the highest degree of accuracy.  This is the way you establish credibility and respect.”

“And frankly it is easier to tell the truth,” he said. “Clear and consistent pounding away at the truth usually produces victory.”