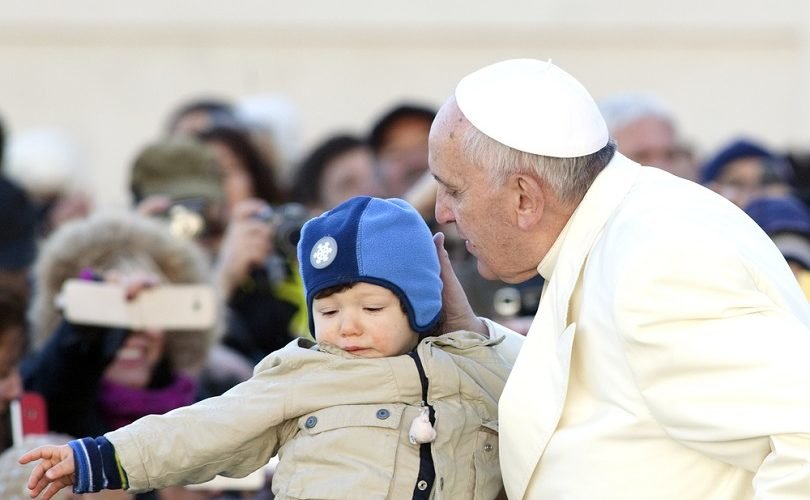 ROME, February 11, 2015 (LifeSiteNews.com) – People should not be afraid to have children, Pope Francis said today at his weekly general audience, since they are the “joy” of their parents and families, create “harmony” between generations and help carry forward hope.

“If a generous family of children is viewed as if it were a burden, there is something wrong!” he said.

The pope quoted the 1968 encyclical on contraception, Humanae Vitae, saying, “having more children cannot be automatically viewed as an irresponsible choice.”

“The choice to not have children is selfish. Life rejuvenates and acquires energy when it multiplies: It is enriched, not impoverished!”

Pope Francis highlighted the low birth rates that are the norm in western societies, saying, “A society with a greedy generation, that doesn’t want to surround itself with children, that considers them above all worrisome, a weight, a risk, is a depressed society.”

The growing demographic crisis in Italy, paralleling that of all Western countries, continues unabated with the total average fertility rate standing at 1.42 children born per woman. The Italian birth rate has for decades been below minimum replacement level of 2.1 children per woman, but the newer development is the falling marriage rate. The Italian statistical agency ISTAT says that in 2013, there were 194,057 marriages in Italy, 13,081 fewer than in 2012. At the same time contraceptive use in this putatively Catholic country remains high.

“Being a son or daughter, according to God’s plan, means carrying within the memory and the hope of a love that has realized itself in lighting up another original and new human being,” the pope continued.

“There is a close bond between a people’s hope and the harmony between generations,” the pope said. “The joy of children makes their parents hearts throb and reopens the future.”