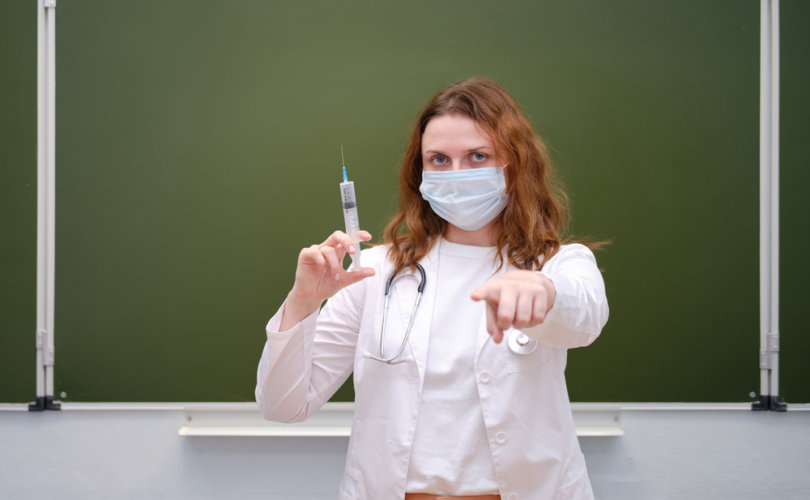 (LifeSiteNews) — A public high school teacher in Washington is under investigation after being caught on video going on a rant against students who have not gotten inoculated.

Puyallup High School is investigating its biology teacher, according to MyNorthwest.com, after she told students that “you’re not allowed to come to public school” if they choose not to get jabbed. There is currently no state law in Washington mandating that all students get the COVID shot, though school staff and volunteers must.

“My body, my choice,” one student can be heard saying in response, echoing a common pro-abortion talking point that has been used by medical freedom activists to voice objection to jab mandates.

“Yep, don’t come here,” the teacher says in return. Another student said that while she has taken the COVID shot, it should be a personal choice.

The biology teacher then goes on to say that “It’s not your choice… because you could create a variant that could kill millions of people,” the teacher said. She said it is “very likely” that people who are “not vaccinated” could infect people and create variants. This is why it is “so selfish” for people to choose not to get jabbed.

“You are killing people,” the biology teacher said.

LifeSiteNews emailed Principal David Sunich and Mark Barnes on Tuesday to ask for an update on the investigation, but did not receive a response.

“With regards to your inquiry, as soon as we became aware of the incident, we took immediate steps to launch an investigation with staff and students,” a school spokesperson told KTTH’s Jason Rantz. “The teacher is currently on paid leave.”

Are “unvaccinated people” causing the virus to mutate?

The biology teacher said in her comments that unvaccinated people are causing the virus to mutate and could be causing people to get infected and die. President Joe Biden and his team repeatedly referred to a “pandemic of the unvaccinated.”

But the science is not so clear.

National Public Radio (NPR) reported that “the vaccines themselves could drive the evolution of more mutants.” While the taxpayer-funded radio station said it is not a “cause for alarm,” it did say that vaccinated individuals could be responsible for the virus mutations.

Paul Bieniasz, a retrovirologist at Rockefeller University, told NPR in February that individuals who have received only one shot “might serve as sort of a breeding ground for the virus to acquire new mutations.”

“That’s because the virus is always mutating,” the interviewer said. “And if one happens to produce a mutation that makes it less vulnerable to the vaccine, that virus could simply multiply in a vaccinated individual,” Harris said. “But even if that happens, that’s only one step in the process.”

Mutations are not necessarily even dangerous, according to a geneticist.

“Viruses mutate,” Nels Elde, a professor at the University of Utah, told ABC News in May 2020. “That’s one of the things that makes them such a successful entity.”