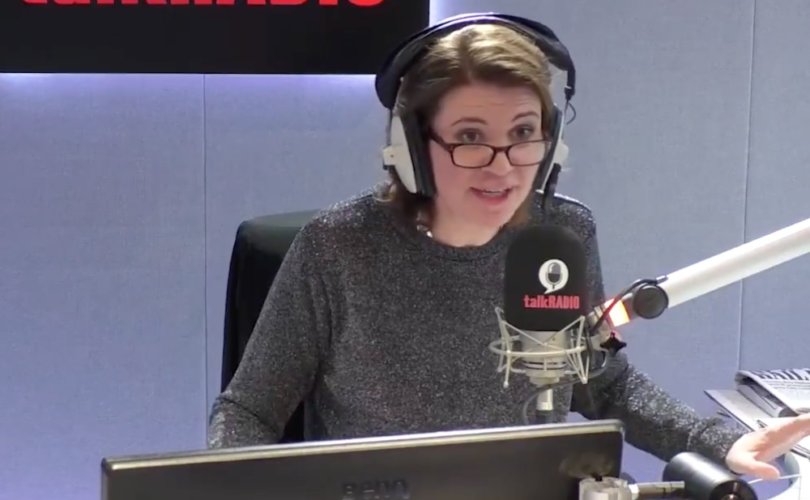 UNITED KINGDOM, November 30, 2018 (LifeSiteNews) – The simple words “man” and “woman” have become lightning rods as transgender ideology permeates every level of society, but one radio host in the United Kingdom just took a forceful stand against redefining terms that have been universally understood for centuries.

This week, talkRADIO Breakfast Show presenter Julia Hartley-Brewer held a segment on the issue of men who “identify” as women being held in women’s prisons. A record number of male inmates in England and Wales claim to be female, a subject that’s garnered controversy in no small part due to cases like that of Stephen Wood, who assaulted four female inmates after being housed in a women’s facility because he “identifies” as “Karen White.”

According to the Ministry of Justice, there is at least one “trans” inmate in every prison in the UK. There are 42 “trans” inmates in women’s prisons, 22 of whom claim to be female. The total number of gender-confused inmates is double that of two years ago. The statistics do not include prisoners who “have already transitioned and have a full Gender Recognition Certificate,” the Telegraph reports.

Safety remains “an absolute priority,” the Ministry claims, and male inmates claiming to be female can be kept in male facilities if they present risks that “cannot be managed within the women’s prison estate.” The Stephen Wood scandal was considered a major black eye for the prison system.

Julia: “I'm not a CIS woman, I'm a woman. I'm not going to have that BBC claptrap on my show. If you say that I'm going to ask you to leave my studio.”@JuliaHB1 | @mrstevenallen | @VanessaLPlatt | @RichardJGarside | https://t.co/sv3MZUm41c pic.twitter.com/tA3e5jE5h4

“The number of women who are behind bars who have actually experienced abuse in childhood or abuse from partners as part of their life experience, they are therefore very vulnerable,” Julia Hartley-Brewer argued. “For them to then suddenly be in an environment where they are kept in cells alongside people who are biologically men is a very big risk.”

“Well it is, and I think you point to a really important fact here that’s often forgotten, which is that most women in prison have been victims of male violence, including male sexual violence,” guest Richard Garside of the Centre for Crime and Justice Studies agreed. “There’s certainly an issue about men going onto those prisons and actually abusing, physically abusing those women. But there’s also a broader question here, which is about whether we believe it is possible or indeed necessary to have female-only spaces.”

Later in the broadcast, Hartley-Brewer declared the standard should be that “if you are physically intact as a man, biologically, you are not in a women’s prison, end of. End of. Nothing to discuss.”

When another participant in the conversation, comedian Steve Allen, replied that female inmates should be protected against attacks from both “a cis or a trans woman,” sparks flew.

Allen protested that he only meant to clearly differentiate trans “women” from the rest of the inmates, but the host stood firm. “I was born a woman, fifty percent of this population are women, we’re not ‘cis’ women, we don’t have to adjust what we’re called for a tiny minority of activists who don’t even represent trans people,” she maintained.

Allen asked if “non-trans women” would suffice, but Hartley-Brewer said that too would be met with a request to leave her studio.

“I’m absolutely serious, I’m not having it. I’m not having our language in this country reduced in this way,” she declared. “I am a woman, you are a man. I’m quite happy for someone to be a trans woman or trans man, but you don’t take away what I am because you choose to change your gender.”

“Cis” and “cisgender” are relatively new additions to the public vernacular, but have become many pro-LGBT activists’ default way of referencing anyone who isn’t gender-confused.

“The term ‘cisgender’ was coined in—where else?—an academic paper. Written in 1998, it was entitled ‘The Neosexual Revolution,’ which in turn cited a 1991 paper entitled ‘Transsexuals and our nosomorphic view,’” Break Point’s John Stonestreet explained in 2016. But while such works are obscure, the language’s impact is widespread.

“All that’s required is for enough outlets and opinion elites to adopt the term in order to raise doubts in our minds about the relationship of ‘gender’ to biology,” he warned. “If enough people doubt that their own experience is normative, then the neologism will have succeeded in its task.”

On her Twitter account, Julia Hartley-Brewer says her “preferred prounouns” are “she/her imperial majesty,” a tongue-in-cheek reference to the left-wing trend of asking for and listing each other’s “preferred pronouns” rather than “assuming gender.”