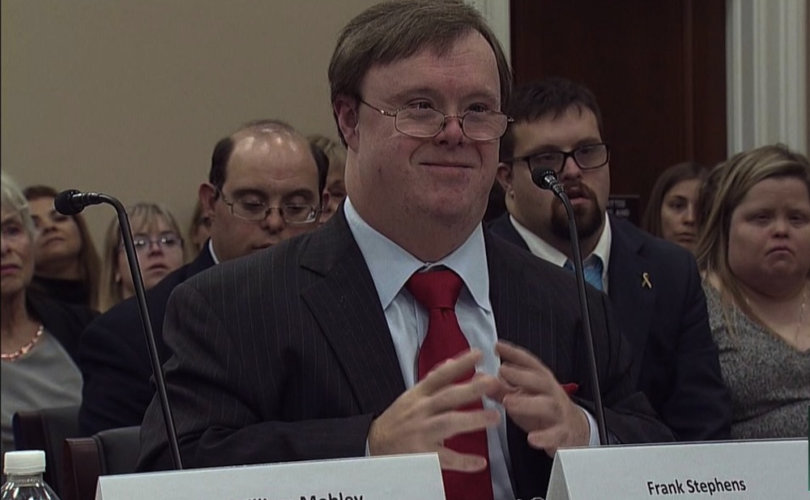 WASHINGTON, D.C., November 1, 2017 (LifeSiteNews) — In a riveting and eloquent speech on Capitol Hill, a man with Down syndrome defended his existence.

Frank Stephens, Quincy Jones Advocate at the Global Down Syndrome Foundation, opened a session of the House Subcommittee on Labor, Health and Human Services, and the Education Committee on Appropriations.

“No one knows more about life with Down syndrome than I do,” Stephens began the hearing on National Institutes of Health funding. “Whatever you learn today, remember this: I am a man with Down syndrome, and my life is worth living!” he exclaimed.

With that declaration, attendees — many of whom have Downs themselves — erupted in applause.

Stephens then addressed the growing practice of fighting disease by killing patients.  “Some people say prenatal screens will identify Down syndrome in the womb and those pregnancies will just be terminated,” he said. “It’s hard for me to sit here and say those words,” he said with emotion.

The actor and Down spokesman associated the common practice of killing preborns who are diagnosed as possibly having Down with Nazi genocide. “People pushing that particular ‘Final Solution’ are saying that people like me should not exist,” Stephens continued. “That view is deeply prejudiced by an outdated idea of life with Down syndrome.”

He went on to explain that most folks with Down syndrome, like himself, lead happy and fulfilled lives. “I have a great life. I have lectured at universities, acted in award-winning film and Emmy-winning TV shows, and spoken to thousands of young people about the value of inclusion in making America great,” he shared.

“I have been to the White House twice, and I didn’t have to jump the fence either time,” he joked.

“Seriously, I don’t feel I should have to justify my existence,” he poignantly concluded.

Stephens referred to Iceland and other countries where health officials brag about eliminating Down, but only by promoting abortion for Down-diagnosed preborns.  In the United States, the March of Dimes funded and set up early ﻿amniocentesis testing centers and promoted early testing. The vast majority of babies who might have a handicap get aborted.

Stephens considers automatic abortion for a Downs diagnosis as evil as the Third Reich.  “I don’t feel I should have to justify my existence, but to those who question the value of people with Down syndrome, I would make three points,” he said.

“First, we are a medical gift to society. A blueprint for medical research into cancer, Alzheimer’s, and immune systems disorders,” he revealed.

“Second, we are an unusually powerful source of happiness,” the advocate said. “A Harvard-based study has discovered that people with Down syndrome, as well as their parents and siblings, are happier than society at large. Surely, happiness is worth something!” he added.

“Finally… we are giving the world a chance to think about the ethics of choosing which humans get a chance at life,” Stephens boldly stated.

Concluding his utilitarian argument for the sake of those who do not see the humanity in people with Down syndrome, Stephens said, “So, we are helping to defeat cancer, and Alzheimer’s, and we make the world a happier place.” He then rhetorically asked, “Is there really no place for us in the world?”

Amniocentesis testing can be wrong. And newer, less invasive testing gives a false “positive” 50 percent of the time or more.

The Boston Globe published a study by the New England Center for Investigative Reporting that concluded “hundreds” of women are aborting healthy babies.

But Down syndrome or not, Stephens says every human being should have the right to life.

Stephens was there to fight for increased funds to go toward medical research of Down syndrome. After asking if Down people have a place in the world, he asked, “Is there really no place for us in the NIH budget?”

“In a deeply personal note, I cannot tell you how much it means to me that my extra chromosome might lead to the answer to Alzheimer’s,” he said. “It’s likely that (Down syndrome) might one day steal my memory, my very life, from me. This is very hard for me to say, but it has already begun to steal my mom from me. Please,” he pleaded with those listening, “think about all those people you love the way I love my mom. Help us make this difference — if not for me and my mom, then for you and the ones you love,” he urged. “Fund this research!”

“Let’s be America, not Iceland or Denmark,” he said, referring to the 100 percent abortion rate for Down syndrome preborns. “Let’s pursue answers, not ‘Final Solutions.’“

Again Stephens repeated, “Let’s be America.” And his last line was, “Let’s make it our goal to be Alzheimer’s free, not Down syndrome free.”

Stephens thanked the committee for their time and consideration. You may view an edited version of his comments here. You may view his entire testimony here.

The Quincy Jones Foundation is a nonprofit started in December 2013 by the famous jazz musician (and Michael Jackson producer). It is dedicated to “helping the less fortunate members of our communities.”