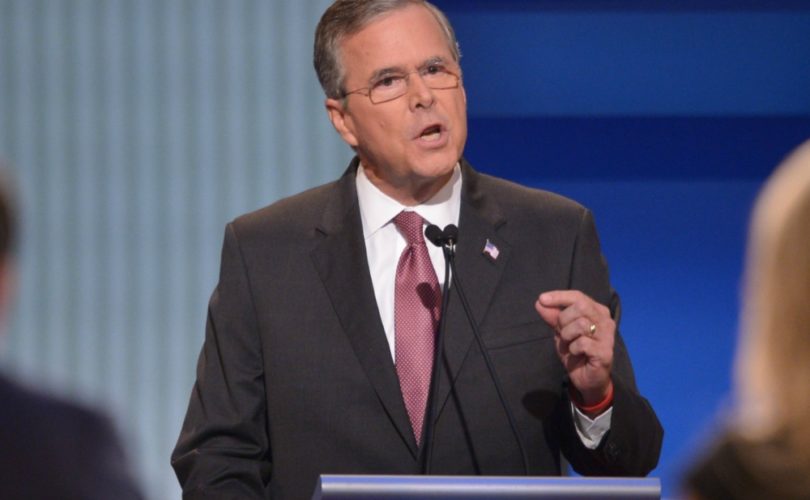 WASHINGTON, D.C., August 10, 2015 (LifeSiteNews) – Journalists have long refused to report the negative side of the abortion industry. Now, the mainstream media have been accused of going one step further: removing mentions of Planned Parenthood funding from the transcripts of the first Republican presidential debate.

Megyn Kelly asked Jeb Bush a probing question about his decision to serve nearly five years on a philanthropy that gave millions of dollars to Planned Parenthood, during the Fox News Channel's prime time debate on Thursday. Yet all trace of that question has disappeared from numerous “full” debate transcripts posted by the nation's foremost media websites.

Jeb Bush served as a founding director of the Bloomberg Family Foundation (now known as the Bloomberg Philanthropies) from 2010 until the end of 2014. While he was responsible for providing oversight, the tax-exempt foundation announced a $50 million family planning grant that included a global partnership with Planned Parenthood to overturn pro-life laws around the world.

“How could you not know about these well-publicized donations?” Kelly asked. “And if you did know, how could you help a charity so openly committed to abortion rights?”

Bush responded by speaking about his pro-life record as governor of Florida.

When asked a second time, Bush replied, “I didn’t know, but it doesn’t matter.”

A reporter for Politico said that “an opposing Republican” asked him to ask a question about the story, which was first reported nationally by LifeSiteNews.

Based on the public's reaction to Bush's answer, it's easy to see why his opponents would want it to come up.

Last Friday night, several members of a voters panel told Kelly that they did not believe Bush was telling the truth about not knowing about the grants. One said that if Jeb did not know, it was a major oversight.

“He flat-out lied,” yet another voter concluded.

Despite the audience's reaction and two days of sustained coverage on Fox, the question does not appear in debate transcripts posted online by The Washington Post, CBS News, and Time magazine.

All three present Kelly's next question – asking Marco Rubio whether he would allow abortion in the case of rape and incest – as though it were the first question on social issues following a commercial break. In fact, it was the second.

It is not clear how or why the question was removed from the transcripts, and Fox News did not have a transcript of the debate on its website as of this writing. But that did not stop a number of commentators from blaming the omission on Fox News and an alleged bias in favor of Jeb Bush.

The omitted section reads in full:

Megyn Kelly: Governor Bush, let’s start with you. Many Republicans have been outraged recently by a series of videos on Planned Parenthood. You now say that you support ending federal funding for this organization. However, until late 2014 – right before you started your campaign – you sat on the board of a Bloomberg charity that quite publicly gave tens of millions of dollars to Planned Parenthood while you were a director. How could you not know about these well-publicized donations? And if you did know, how could you help a charity so openly committed to abortion rights?

Jeb Bush: I joined the Bloomberg foundation because of Mike Bloomberg’s shared commitment for meaningful education reform. That’s why I was on it. We never had a debate about the budget. It was presented and we approved it. Not item by item. Here’s my record. As governor of the state of Florida, I defunded Planned Parenthood. I created a culture of life in our state. We were the only state to appropriate money for crisis pregnancy centers. We expanded dramatically the number of adoptions out of our foster care system. We created, we did parental notification laws. We ended partial birth abortion. We did all of this. And we were the first state to do a “choose life” license plate. Now 29 states have done it and tens of millions of dollars have gone to create a culture where more people, more babies are adopted.

Kelly: But did you know?

Bush: No, I didn’t know, but it doesn’t matter. I was working on this board because of the education. My record is clear. My record as a pro-life governor is not in dispute. I am completely pro-life, and I believe that we should have a culture of life. It’s informed by my faith from beginning to end. And I did this not just as it related to unborn babies. I did it at the end-of-life issues, as well. This is something that goes way beyond politics. And I hope one day that we get to the point where we respect life in its fullest form across the board.