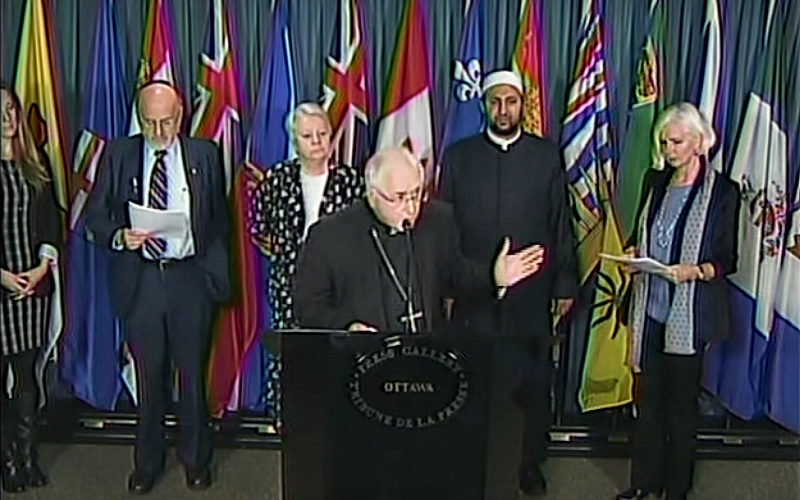 Archbishop Terrence Prendergast of Ottawa speaks at the Oct. 29 press conference unveiling the declaration signed by dozens of faith groups.

OTTAWA, November 12, 2015 (LifeSiteNews) — Canada’s Catholic bishops, leaders from the Evangelical Fellowship of Canada, the country’s largest group of Christians, and numerous other faith-based groups said at the end of October that euthanasia and assisted suicide are “morally and ethically wrong.” At a news conference in the nation’s capital Oct. 29, the faith leaders said legislators should enact laws that promote the “rights to life and security for all people,” including the sick and those in need of care.

The group's declaration has been endorsed by over 30 Christian denominations together with about 20 Jewish and Muslim leaders.

In a media scrum following the reading of the two page declaration one spokesperson for the group backpedaled the message somewhat, stating that the group would ultimately “allow…citizens to opt for some type of assisted death, if that was their ultimate choice” as well as “respect” laws that allowed this to happen, as long as they were “as limiting as possible.”

The declaration itself, however, is worded strongly, with faith leaders making it clear they are opposed to legalized killing.

“We, the undersigned, each from the basis of our sacred teachings and enduring traditions, affirm the sanctity of all human life, and the equal and inviolable dignity of every human being,” the declaration states, “Together, we are determined to work to alleviate human suffering in every form but never by intentionally eliminating those who suffer.”

The group is primarily advocating for “good-quality” palliative care as the way to care for someone who is approaching life’s end and is in pain.

Earlier this year in February the Supreme Court overturned the country’s ban on assisted suicide. The court gave the Federal government 12 months to come up with a new set of laws that would govern how doctors kill their patients.

Instead of demanding that Parliament override the court ruling by means of the “notwithstanding clause,” the group’s declaration urges legislators to make laws that promote human rights, that focus on palliative care, and that protect the conscience rights of doctors.

“In light of the recent decision of the Supreme Court of Canada, we urge federal, provincial and territorial legislators to enact and uphold laws that enhance human solidarity by promoting the rights to life and security for all people; to make good-quality home care and palliative care accessible in all jurisdictions; and to implement regulations and policies that ensure respect for the freedom of conscience of all health-care workers and administrators who will not and cannot accept suicide or euthanasia as a medical solution to pain and suffering,” states the declaration.

At the press conference, Archbishop of Ottawa Terrence Prendergast, when pressed by reporters what exactly the group wanted the Federal Government to do, replied: “We would like to have protection of life to the greatest extent possible, and to allow the person to choose death only in an extreme case, once we've exhausted all the other possibilities and palliative care.”

He explained that the group would “regretfully, allow citizens to opt for some type of assisted death” to avoid the current abortion situation where, he said,  “there are no regulations, no controls, no safeguards.”

“I personally would not be in favour of allowing any deaths, but given the fact that we live in a democratic society and laws are made to deal with extreme situations, then I would say we would have to respect the ones that are as limiting as possible,” he said when pressed about what safeguards he would accept.

The Archbishop did not respond to LifeSiteNews’ request for comment.

Jim Hughes, National President of Campaign Life Coalition, told LifeSiteNews that a law can be made as “narrow and restricting as possible, but it will nevertheless be exploited down the road to expand the categories of those eligible for death.”

He said the same situation happened when abortion was first legalized in 1969 with Pierre Trudeau’s infamous Omnibus bill.

“Canadians were assured at that time that the new abortion law would not result in a spike in abortions, but would only make legal the ones that were already happening, which numbered about 200 the previous year. The law even went as far as making sure that every abortion was approved by a panel of three doctors. But these safeguards and restrictions were eventually argued to be too burdensome, and they were abandoned in 1988 when the Supreme Court struck down all the laws governing abortion.”

Hughes said he can understand the good intentions behind wanting to make a “bad law” as limited as possible. But he added that the country’s dismal record on abortion, as well as the examples from numerous countries — such as the Netherlands — where original safeguards governing assisted suicide have been practically swept away, proves that the safest way for the government to protect people from abuse is to steadfastly refuse to open the door to the practice in the first place.

“The only way that we're going to circumvent the Supreme Court decision striking down our laws against allowing some people to kill others is to invoke the notwithstanding clause. In this way the government of this country, which has been elected by the people for the people, will ensure that the lives of all Canadians will be protected,” he said.

Earlier this week in a November 4 letter, the Canadian bishops unanimously asked the Liberal government to invoke the “notwithstanding clause,” which would put a five-year moratorium on the Supreme Court’s decision and give legislators what spokesperson Bishop Doug Crosbie said would be “more time” than the court-imposed one year deadline to “look closely at the Court’s decision and the grave social risk of embarking on policies of assisted suicide and euthanasia.”

Hughes said that now is the time to “dig in your heels in and just say ‘No’ to the making of a morally and ethically problematic law.”

“Future historians are going to judge us by how we acted in the face of injustice. I believe the people who uncompromisingly stand up and say ‘No’ to this will be regarded in a favorable light. But those who agree that it is acceptable to tolerate the killing of human lives with restrictions will not be judged so positively.”

Alex Schadenberg, Executive Director of the Euthanasia Prevention Coalition, told LifeSiteNews that a law targeting some people for death should simply not be tolerated.

“The Supreme Court has made a terrible decision in striking down the laws prohibiting euthanasia and assisted suicide. Some in the faith community might believe that one approach to minimize the damage is to advocate for a law that is as restrictive as possible. But it is the role of faith leaders to uncompromisingly uphold the truth about the dignity and value of each and every life — which would eliminate any confusion —  and to express that truth clearly, not to be negotiating with the government about who is going to live and who is going to die.”

“The government needs to know from these leaders that they can in no way support a law that targets some people for death. No rights in law should ever be given to one person to cause the death of another person. To allow this is contrary to the dignity, respect, and equality that every person is owed,” he said.