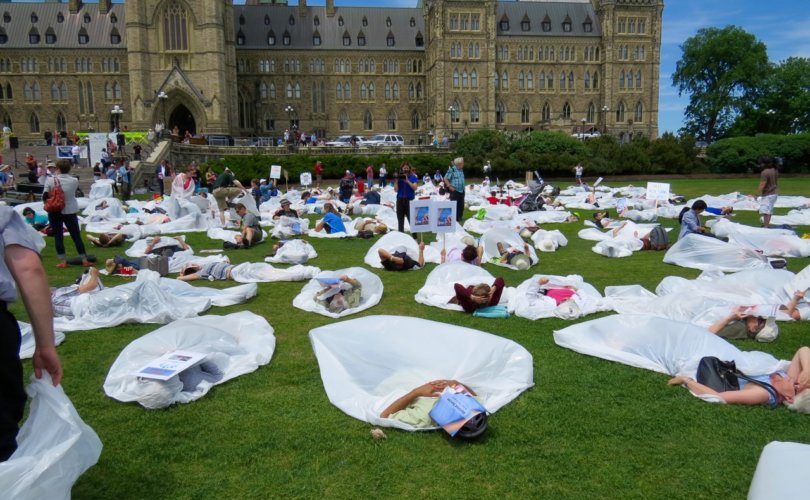 OTTAWA, June 1, 2016 (LifeSiteNews) — Over 250 of a larger crowd of at least 1,000 men, women, and children crawled into white body bags and lay dead-like on Parliament Hill this afternoon under a hot sun and clear blue skies to demonstrate against the Liberal government’s controversial euthanasia bill that would allow doctors to kill their patients in the name of “healthcare.”

The event was the conclusion of a rally that saw MPs, senators, doctors, and anti-euthanasia activists voice their concerns about Bill C-14 which passed its third reading Tuesday by a vote of 186 to 137 and is now headed to the Senate for debate. The event was organized by the Euthanasia Prevention Coalition, Living with Dignity Network, and the Physicians’ Alliance Against Euthanasia.

“There is now little doubt that euthanasia will be legal in the whole country, despite the warnings from other countries, despite the dangers, despite the fact that people will be driven to request it out of fear, loneliness, guilt, coercion,” Dr. Catherine Ferrier told the crowd of hundreds who came with signs to show their opposition to the bill.

“No safeguards can prevent that, and certainly not the safeguards that are being proposed in this bill,” she added.

“We’ve been told that Canada has no other choice but to legalize euthanasia, that either we pass this bill or the Carter decision will kick in. That is not true. The government could have recriminalized euthanasia and assisted suicide by restating the purpose of the Criminal Code. They chose not to do that,” she said.

Ferrier urged her colleagues to stay strong in saying “no” to killing their patients.

“I say to my colleagues: ‘Don’t ever get used to it. History will judge us,’” she said.

Family physician Paul Saba, who runs the Coalition of Physicians for Social Justice, stood with his wife and three children and made the point that Parliament is not subservient to the Supreme Court.

“Parliament has a responsibility to protect the public and the public good. They do not have to follow the Carter decision. That is why we have Parliament. Otherwise, get rid of Parliament and replace it by the Supreme Court,” he said.

Three senators told the crowd that they would be opposing the bill.

Senator Betty Unger said that she could have “never imagined” that her job would force her to deal with an issue involving the legalization of killing.

“It truly is heart wrenching and gut wrenching – what can I tell you? I am completely opposed to this idea.”

She criticized the Trudeau government for seeing the deliberate killing of a patient as a legitimate healthcare expense.

Unger joined Senators Norman Doyle and Tobias Enverga and together all three pledged to vote against the bill in the Senate and encouraged their colleagues to do likewise.

“I can tell you from my own perspective, I’ll be voting against this bill and doing all I can to assist other people to do the same,” Doyle said.

A number of MPs, all conservative, also spoke at the rally.

MP Bev Shipley, Lambton–Kent–Middlesex, lamented how the Supreme Court in the Carter decision last year “turned a criminal activity into a healthcare system.”

“It is now paid for by Canadian healthcare where doctors are paid to euthanize people,” he said.

MP Arnold Viersen, Peace River–Westlock, told the crowd that they represented the “conscience” of Parliament and thanked them for making a stand.

“It means a lot to us to know that there is still a large group of people in this country who still know what the meaning of life is. Thank you for being here. You are our conscience,” he said.

MP Brad Trost, Saskatoon–University, called it a “sad moment” to have Parliament vote in favor of a bill that legalizes death when many MPs “did not fully understand the implications of what was being voted on.”

Schadenberg says that Canadians must now contact senators with their concerns.